On the road with the 2017 Pinoy Book Stop Tour | Lifestyle.INQ ❮ ❯ 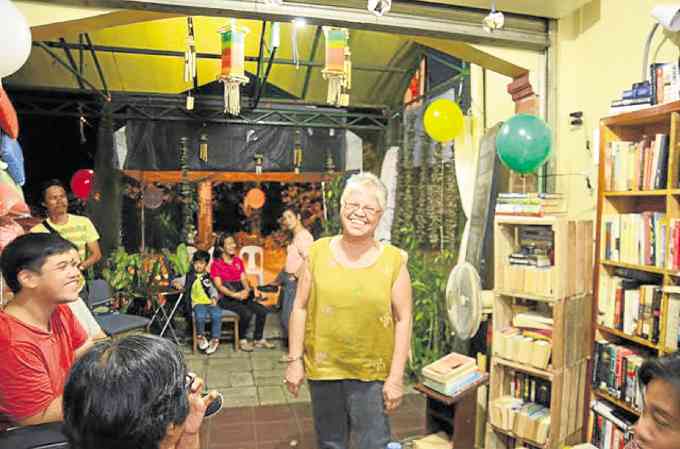 On the road with the 2017 Pinoy Book Stop Tour

When the challenge to create a month filled with literary and cultural activities were presented to the National Book Development Board (NBDB), its chair Flor Marie “Neni” Sta. Romana-Cruz described it as a most welcome “problem.”

The promotion of literature, especially those by Filipino authors, should be a year-round activity after all, she said.

Proclamation No. 968, signed on Feb. 10, 2015, declared April as Buwan ng Panitikan Filipino or National Literature Month. As its contribution to the celebration. NBDB, with the National Commission for Culture and the Arts and Komisyon sa Wikang Filipino, started last year the Pinoy Book Stop Tour.

The first stop was the Marikina Book Museum and Ethnology Center, which features a collection of books and artifacts from over 200 countries and islands. The books are from the collection of Dominador Buhain, of the Rex Group of Companies.

Next was Quezon City Public Library, one of the biggest public libraries in Metro Manila. Inaugurated on Aug. 16, 1948, the library has 18,131 books.

Final stop on the first day was the University of Santo Tomas Publishing House USTPH), the oldest press in the Philippines and one of the oldest in the world.

“Doctrina Cristiana,” the oldest book published in the Philippines, was printed by the Dominicans in 1593, USTPH, the publishing arm of the oldest university in Asia, traces its beginnings to that wooden-block press of the first Spanish Dominican friars who beat all the other orders in coming up with a printing press to aid them in evangelizing the islands.

Although USTPH holds office and has a bookstore at Beato Angelico, one of the more recent buildings on the ancient campus, it has recently opened another and more spacious bookstore at the more centrally located UST Main Building, declared a National Cultural Treasure by the National Museum.

The following day saw a visit to Bodhi Mind and Body Shop in La Bella, Tagaytay. Run by Grace Eleazar, the bookstore highlights health and wellness books and crafts.

Eleazar said Bodhi Mind and Body Shop was unique because it delved into all aspects of living: “In short, this is a bookstore on life itself.”

An hour or two later, participants of the Pinoy Book Stop Tour found themselves at the very unique Komikero Komiks Museum in San Pablo, Laguna.

In Los Baños, Laguna, is another quaint bookstore which offers secondhand books—
Books, Crafts, and Coffeeshop. Owner Yolanda Catalla said the idea of the shop came when she sold three “balikbayan” boxes full of books at a bazaar.

The response from the community was slow at first, but people started to appreciate the bookstore not just for its books but also for the events, especially the open-mic held every last Thursday of the month when guests get together for a night of music and poetry.

“The Pinoy Book Stop Tour is being done to draw attention to independent bookstores, those that are not that well-known and are found outside Metro Manila,” said Sta. Romana-Cruz. “It’s also to promote our Filipino authors, because we want to hold up our Filipino authors as celebrities, as models to be idolized and learn from. One thing I notice is that the question is always about what advice the authors can give to get published.”

And while the project is still very young, multi-awarded poet Joselito de los Reyes (a resident fellow of the UST Center for Creative Writing and Literary Studies and research fellow of the UST Research Center for Culture, Arts and Humanities) said that the NBDB project was very important.

“Sana lang ang mga stakeholders, the government, academe, book-publishing industry would take notice and recognize the value of Philippine literature, so this would expand and more people could get involved,” said De los Reyes. —CONTRIBUTED