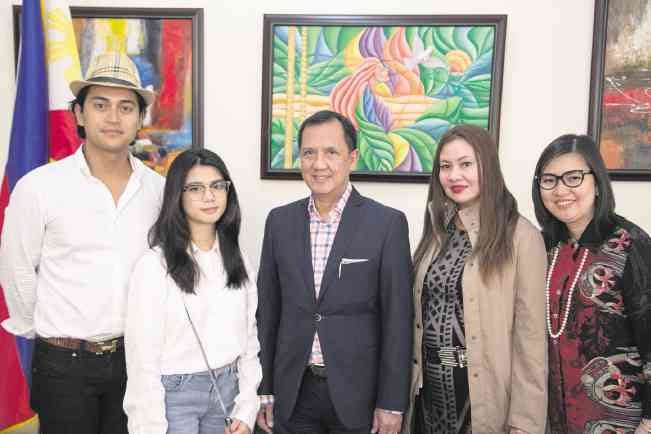 He left the Philippines as a hairdresser and masseur and came back as a social documentary photographer.

Paris may arguably be the most romantic city in the world, but it is hardly that for female OFWs.

They work long hours, scrubbing floors, washing dishes, climbing up to eight floors to bring hot bathing water, doubling as caregivers to the elderly, and risking their lives while cleaning high windows without any harness.

Most of the housekeepers don’t use gloves while cleaning. Hence, the toxic substances, coupled with the cold weather, deform their hands and fingers.

Their plight is captured in the exhibit “Chicken Hands” at Yuchengco Museum. Title is inspired by the Tagalog saying “Isang kahig, isang tuka” (One scratch, one peck), a saying incorporated by Freddie Aguilar in his fatalistic song “Dukha” (Poor).

Using a Canon camera and one light source, Arbilo photographed the women at a low angle and with wide-angled lens to emphasize grotesqueness

The theme was inspired by his mother Rosenda, 57, whose hands were knobby and swollen from the housework and years of not using protective gloves.

Arbilo studied electronics and computer technology at a vocational school in San Pablo, Laguna. Meanwhile, his mother was working in Paris to send her children to Alliance Française de Manille. Her goal was to bring her children to France so they could escape their abusive father.

Arbilo became a pioneering employee in the upscale Emphasis Salon. Owner Teng Roma exposed him to haircutting and hair-coloring techniques. Arbilo learned massage from the Indonesian masseuses who did the spa treatments.

In 2002, Arbilo migrated to Paris and assisted his mother in her housework. He became exposed to the hardships of OFWs.

Realizing he was too clumsy to handle fragile china, he offered his hairdressing skills to Filipinos who, in turn, recommended his massage services to wealthy French clients such as couturier Pierre Cardin, actor Stephane Voisin, and former model Amadin Cornette Saint-Cyr.

With his earnings, Arbilo bought a camera and taught himself photography. One day, he showed his mother’s portrait to art expert Sylvana Lorenz, who had worked with Cardin. She told him to do a series of similar portraits to make a statement.

Arbilo showed 50 portraits to Maison Européenne de la Photographie, France’s mecca of photography. His works were scaled down to nine most dramatic photos.

A French magazine wrote: “These women use their hands, body and soul to earn money and send their children to school.”

The exhibit was also featured by the British daily, The Guardian.

Although the photos reveal the impact of laboring for 20-30 years in harsh conditions, the women can avail themselves of the universal health-care program, sponsored by the government, and a modest pension. Government’s health-care system enabled Arbilo’s mother to have her breast cancer treated.

Social documentary photography may not pay the bills. Arbilo also takes photographs of the red carpet at Cannes Film Festival. He also held an exhibit of prominent Filipinos in Dubai in collaboration with young artist Francesca Concepcion. —CONTRIBUTED