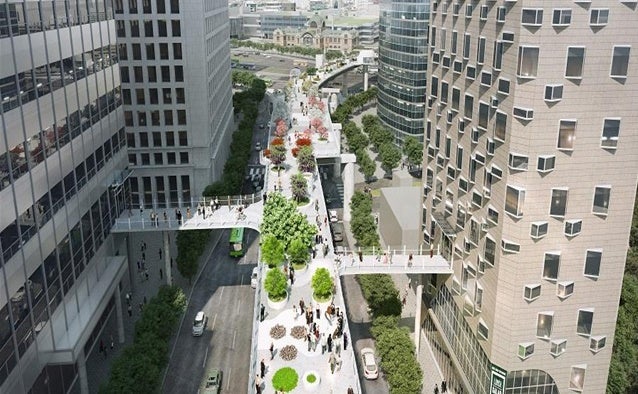 Opening part of the “Seoullo 7017” on Tuesday, ahead of the official opening in May, Seoul Mayor Park Won-soon on Tuesday described the urban sky park as a place where “nature and humans can live side by side.”

“(The launch of Seoullo 7017) will not only restore the overpass, but become a catalyst for the revival and regeneration of neighboring regions through the high number of visitors,” Seoul Mayor Park said.

The pedestrian-friendly park will stretch for about a kilometer and link seven surrounding areas including Seoul Station and Namdaemun Market to 12 pedestrian walkways.

Touted as a rival to New York’s High Line Park, the city government said it will feature over 24,085 plants representing 228 species of trees, shrubs and flowers found in and outside Korea.

Complementing the plants will be cafes, street markets, flower shops and performance stages, the city said.

Officials said the park will provide not only a stretch of greenery, but also a botanical education, allowing citizens to have a closer look at the labeled plants arranged in alphabetical order.

The project began four years ago to make use of an old overpass that once served as a major road connecting western and central Seoul. Public calls for its removal had mounted after a safety assessment classified the outdated overpass as dangerous in 2006.

The “70” in the name Seoullo 7017 refers to the year 1970 when the Seoul Station flyover was constructed, while 17 is a reference to the number of walkways connected to it and the year 2017 when its construction is to be completed.

Putting safety as a top priority, about 40 percent of the 59 billion won ($52 million) of construction cost was put into securing the earthquake-proof structure, the city said.

“The elevated urban park was constructed to stand up to a magnitude 6.5 earthquake, and to allow over 50,000 people to walk on the park at once,” said Seoul City official Kim Kwon-ki.

A total of 29 surveillance cameras will be installed around the park to enhance security for citizens, he added.

The official opening of the Seoullo 7017 is slated for May 20. The lighting ceremony and the celebration chorus will begin at 7 p.m.

A variety of events involving citizen participation will take place at Seoullo 7017 and continue until June 18, the city said.