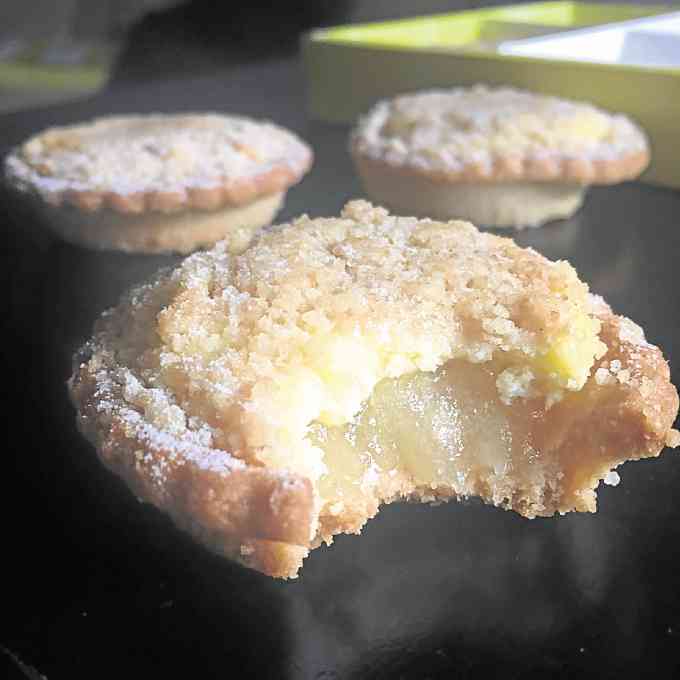 We continue to be spoiled for choice as the offerings of new restaurants are abundant and varied.
April saw the opening of another crop of dining places and the introduction of menus by old players.

Apple Cheese Tart by Kumori
Hanjuku Cheese, Toyohashi Pudding and its Signature Cheese Tart—there is definitely a lot to like at Kumori.

Its recent offering translates the all-time favorite apple pie into a cheesy creation. A sweet tart shell is topped with caramelized apples and blanketed with a combo of cheeses. The baked treat is then crowned with a streusel, adding contrast to the creamy texture.
A best seller in the making, the Apple Cheese Tart is on limited run, so grab a box when you can. 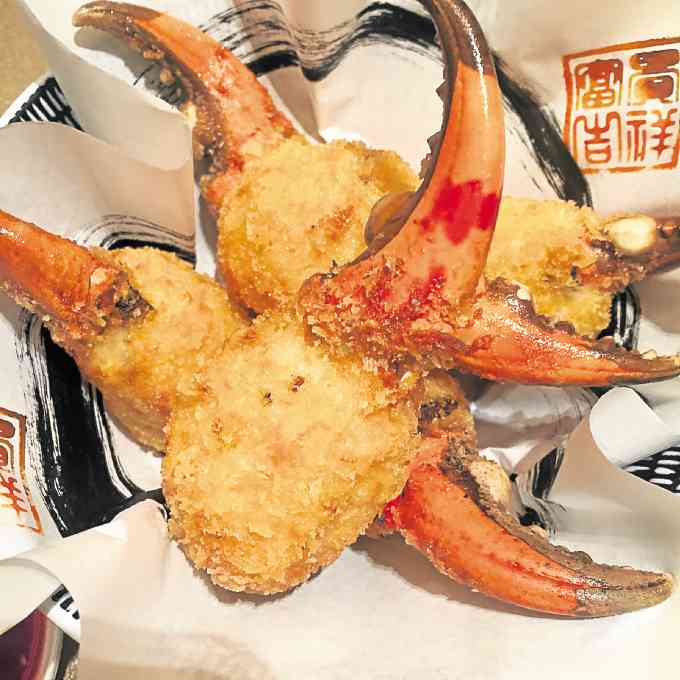 The whole menu satisfies, but the Crispy Stuffed Crab Claw delights. It’s a crab “meatball” that’s been lodged back into the claw, breaded, golden fried and dipped in hibiscus sauce. 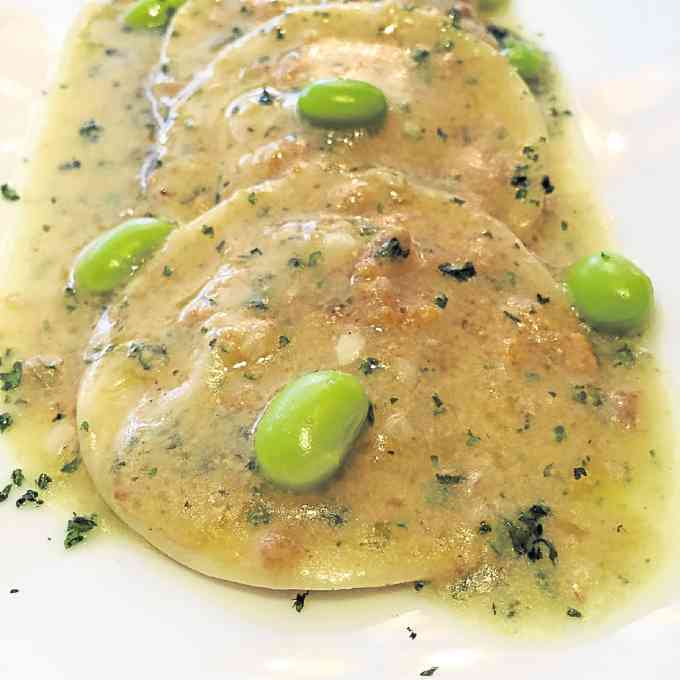 It may be hard to release M Dining from the chains of its past (Masseto), but executive chef Tom Bascon is creating a new set of dishes to love and come back for.

His fresh pastas are some of the city’s best. The tagliatelle tossed in yuzu cream is light yet filling, while the shrimp ravioli is rich, with the oily slick of uni butter.

The Bicol uni and shiso tempura with the stuffed pasta dish deserve to be on their own as appetizers. 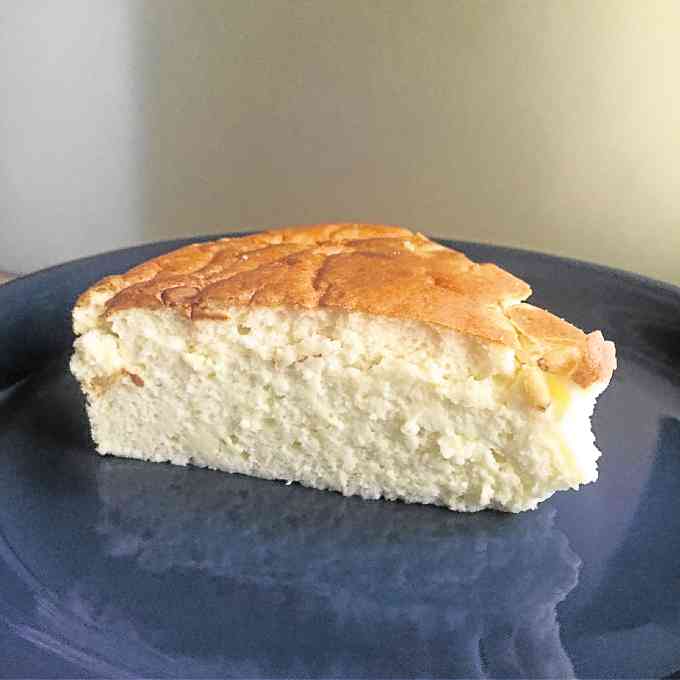 Pine Nut Cheesecake at Wildflour Café and Bakery
Recognized for its exceptional bread and pastries, Wildflour has two kinds of cheesecake—the Cheesecake Flan and the Pine Nut Cheesecake, introduced just last week.
It was inspired by the popular cheesecake of La Vina Restaurant in San Sebastian, Spain. Like the well-loved Spanish cake, Wildflour’s is also burnt on top, creamy and not dense like many commercial cheesecakes.

What’s unique about it, though, is that this is mixed with pine nuts that lend that nutty flavor. 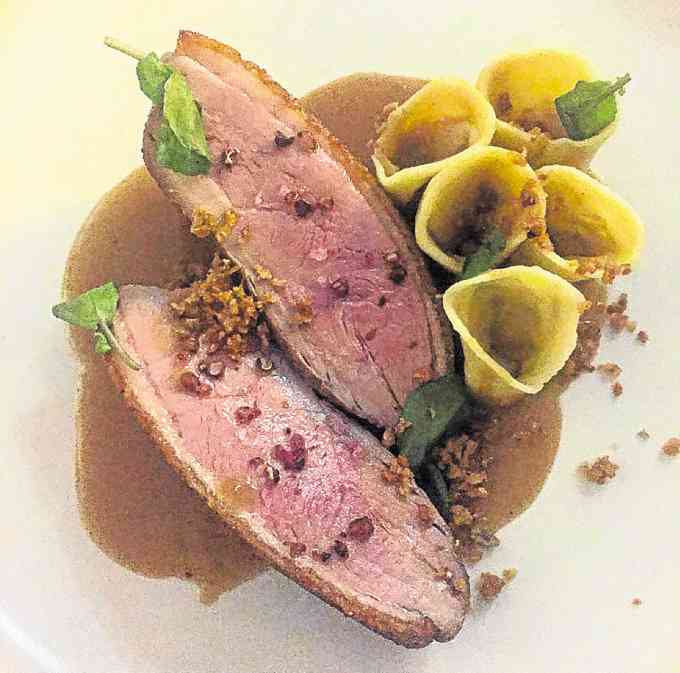 Made Nice has been generating buzz since opening late last year because of its memorable New York-inspired dishes. The Octopus, its pasta dishes and desserts are prominent posts on social media.

Its newest dish, the rich and gratifying duck, is bound to be a hit, too. A roasted duck breast with the fat perfectly rendered sits in a pool of fig sauce and accompanied by pieces of foie gras tortellini. 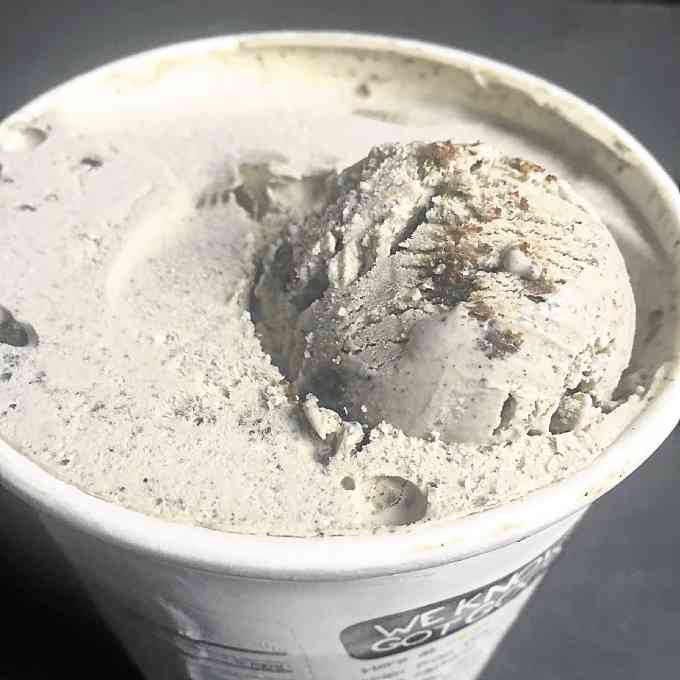 This summer, artisanal ice cream maker Kelvin Ngo introduced five more variants—
orange chocolate, salted caramel coconut sugar, Thai milk tea, almond lychee, and the most promising of the lot, the black sesame Oreo. It tastes like the adult’s cookies and cream. The nuttiness of the sesame is the perfect complement to the chocolate sweetness of the cream-filled cookie.

Merry Moo is at SM Aura, SM Megamall and Legaspi and Salcedo weekend
markets, and in select supermarkets. 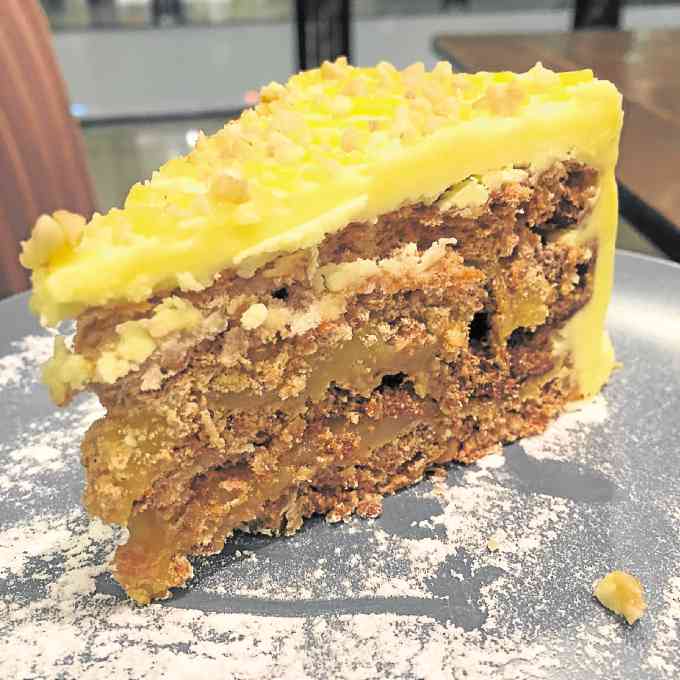 From the baker behind the best-selling Nono’s Chocolate Oblivion comes a new cake. “I wanted to come out with a sansrival but I wanted it to be different,” says Baba Ibazeta-Benedicto, who recently opened her first restaurant, Nono’s at UP Town Center. “I thought of yema, since it’s a Filipino favorite.”

Three layers of cashew nut meringue sandwich have a smooth custard-taste filling. It has buttercream icing. 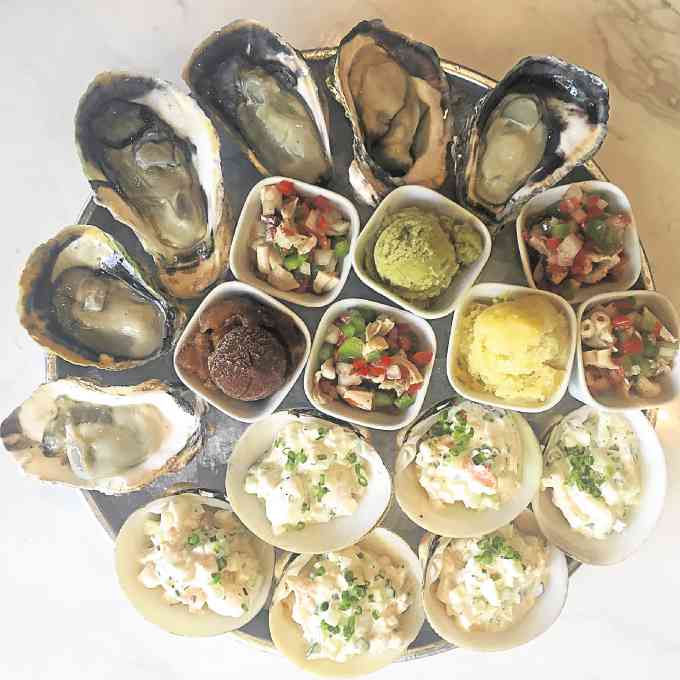 “Our raw bar section at The Todd English Food Hall is the second most popular station after the grill (which we turned into Pound), so we decided to turn our next spin-off into a seafood restaurant focused on borderless seafood,” says Eric Dee of the Foodee Global Concepts.

The oysters are flown in daily from Aklan, and only the sushi grade salmon and tuna are imported. An estimated 80 percent of the seafood is sourced locally and served using Asian, Western and European techniques.

The best way to appreciate what Hook offers is to order the raw platters, so you enjoy the seafood in multiple preparations and complemented with a bevy of flavors. They include the snapper and apple clam ceviche, tuna poke, crab and uni slaw and salmon with ginger jam. 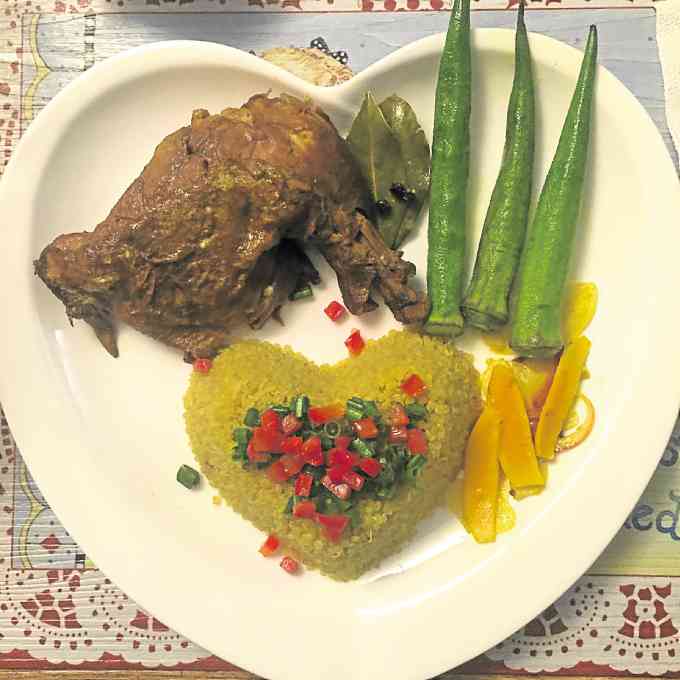 Karen’s Kitchen has always been known for cakes and pastries. But when Karen Young turned the home-based brand into a neighborhood restaurant, its popularity grew to include comfort food and tasty healthy fare.

Her Adobo sa Dilaw Quinoa is so new, just a few days old, and people are talking about it. Karen first came across the Batangas adobo in a resort outside the city. “I loved it but it’s too far for me to go back so I made my own version,” she says.

The chicken is slow braised, in a broth enhanced with turmeric, for two hours, resulting in a juicy meat that falls off the bone. It comes with quinoa cooked in the same potent broth, served with blanched okra. 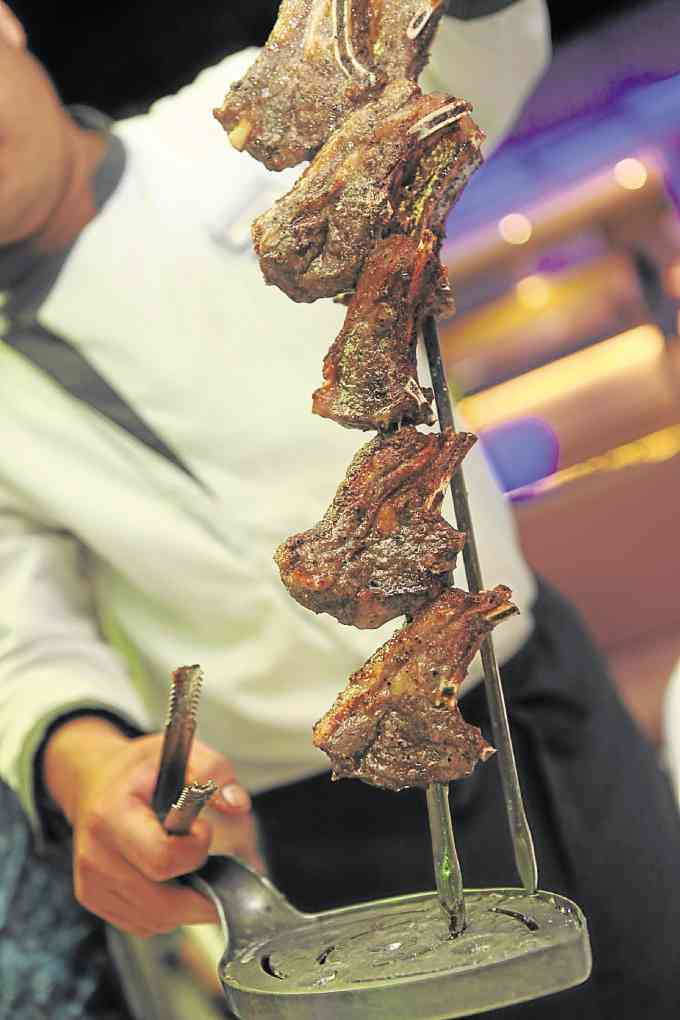 From Cebu comes the Ibiza Beach Club, a sprawling 4,000-square meter entertainment and food hub that opened in Taguig on Easter Sunday. The grand restaurant has a chic resort design, with a view of the BGC concrete jungle. It has private lounges, a Jacuzzi, and a center stage equipped with state-of-the-art sound system.

Equally grand is the food, the signature 15-course Balearic-inspired grill in particular. There’s a salad bar and you can have your fill of any (or all) of the grilled items served and sliced on the table. There’s jumbo prawns, calamari, salmon, the catch of the day (fish), filet mignon, lamb leg, pork belly, ostrich, chicken and baby back ribs.

What I thoroughly enjoyed were the tender lamb chops with mint jelly, US Angus rib eye, and fork-tender beef ribs.
The meal-with-the-best-deal also comes with rice or mashed potatoes, and a refreshing dessert—grilled pineapple with fresh yogurt and honey. It’s reasonably priced!