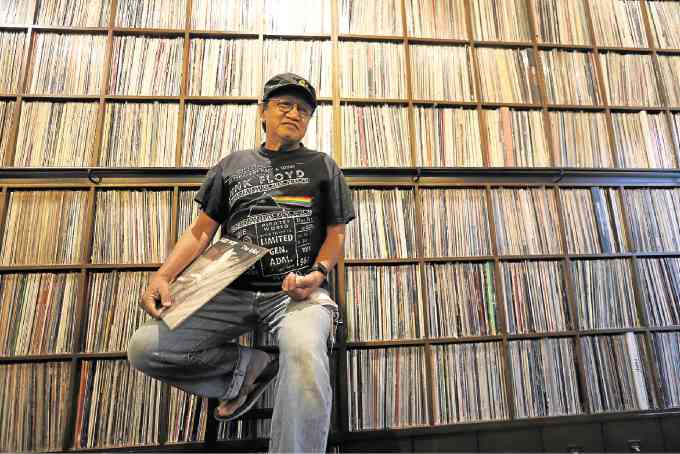 Many, if not most, of the visual artists I’ve met over the years are also serious music buffs.

The first time I visited painter Danny Dalena in his Kamuning studio, if memory serves, Keith Jarrett’s “Koln Concert” was playing on the stereo. I would often run into him at annual CD sales, and he invariably went home with shopping bags full of CDs.

Judging by the CD library in his studio, National Artist BenCab retains a fondness for Talking Heads, U2 and the Pretenders—the music that was playing in Baguio’s Rock Session café when he first returned home from London.

The late Nonoy Marcelo couldn’t work without music playing in the background. I remember his drafting table piled high with cassettes. He was big on Traffic, the Rolling Stones, and British prog rock like Pink Floyd and Mike Oldfield, but he also dug Mahler, Wagner and his favorite composer, Mozart. (“Play me something I can cook by,” Marcelo would quote Michael Caine in “Get Carter,” whenever he put Mozart on, preparatory to dashing off another brilliant editorial cartoon.)

It was Jose Tence Ruiz who turned me on to Jennifer Warnes’ tribute to Leonard Cohen, “Famous Blue Raincoat.” And I wasn’t at all surprised to hear the post-rock group Godspeed You! Black Emperor droning in the background when I interviewed Gabby Barredo while he was working on the set of “Opera” last year.

Of course, filmmakers, photographers, writers and other creative types are often into music, as well. What I found intriguing was how music seemed to feed into visual artists’ creative process, in many cases directly influencing what goes on the canvas.

To further explore the connection between music and art, I arrange to meet with painters Elmer Borlongan, Ross Capili and Romeo Lee—artists whom I also knew to be serious music heads—through the online hi-fi enthusiasts’ group called Audio Pilipinas.

We meet at 78-53-86, a low-key audiophile bar on a nondescript stretch of Katipunan Avenue in Quezon City. So low-key, in fact, that I never noticed it before, even though I pass by it nearly every day on my way to or from Edsa.

My loss, since 78-53-86 turns out to be the nearest thing to my dream man-cave: a solid wall of 10,000+ pristine vinyl LPs—everything from classic Blue Note and Impulse! jazz discs, to the latest Yo La Tengo and Ryan (not Bryan) Adams, not to mention mouthwatering box sets of the Doors and the Cowboy Junkies.

To listen with, two broadcast-quality British-made Garrard 301 turntables, state-of-the-art in the year I was born (the year Elvis released his classic pink-and-green eponymous RCA debut, if you have to know). The tables fed their signals through a vintage Dynaco preamp and amp setup, into a pair of huge full-range speakers in handsome hand-rubbed wooden cabinets.

John Lee Hooker is playing, although interestingly enough, another of the LPs on rotation is Iggy Pop’s “The Idiot,” said to be the platter that was spinning when Ian Curtis, the singer of Joy Division, hung himself.

“I’m also one of those artists who always has music on whenever I’m working,” says painter Elmer Borlongan, speaking in Tagalog.

He is wearing a Steely Dan T-shirt and is carrying a newly purchased vinyl copy of The Cure’s “Standing on a Beach: The Singles.”

“My brush keeps time with the beat, like a drumstick,” he adds. “When the music is fast, my brushstrokes are also fast. You lose all sense of time when you’re painting and listening to music. It’s like you’re in another world. On the other hand, when I’m painting and there’s no music on, time seems to pass slowly. It’s as if there’s nothing giving me the drive to finish the piece.”

His artistic and musical tastes have always developed in parallel, he says.

As a kid growing up in 9 de Febrero in Mandaluyong, Borlongan would often ride the minibuses plying the Pasig-Quiapo route. Usually, the buses didn’t have air-conditioning, but they all had eight-track tape players, likely as not blasting Nazareth, the Scorpions or some other “slow rock” ilk.

What struck Borlongan, however, were the ceilings: They were hand-painted with portraits of the Beatles and other rock stars of the day. “I’ll never forget the mix of music and art during those bus rides,” he says.

This parallel development continued when he enrolled in the UP College of Fine Arts, where he was promptly recruited into a hard-core punk band by schoolmate Raul Rodriguez.

Borlongan had been in a garage band in high school, playing mostly U2, Big Country and other “new wave” covers. But after a crash course in the history of punk through repeated viewings of a Betamax tape of the Sex Pistols, the Gang of Four and the Dead Kennedys, Borlongan’s mind was well and truly blown.

They named their band Is It Safe? (from Laurence Olivier’s classic line in “The Marathon Man”) and were soon playing at the punk dive Katrina’s, with the likes of Betrayed, Philippine Violators, and the Wuds.

The raw, gritty, urban edge of punk appealed to Borlongan, not only because he had grown up on city streets, but because the contemporary art of the day by the likes of Jean-Michel Basquiat tackled similar themes. The same energy eventually made its way onto Borlongan’s canvases, in his earlier work with the Saling Pusa group, and even today, when his distinctive style of figurative expressionism has placed him in the front ranks of contemporary Filipino visual artists.

Borlongan has made his home in bucolic Zambales for the past 13 years, since his marriage to fellow artist Plet Bolipata, but that urban, punk edge remains a defining feature of his work.

For painter and photographer Ross Capili, music is also a means of connecting with his urban roots, and it’s as much about the playback mechanism as the music itself. “I grew up in Tondo with music on the jukebox,” he recalls. “My brother used to buy electronics kits in Raon and assemble his own components. For me, it’s about the connections to the sounds I used to hear, whether in mono or stereo.”

These days, the 58-year-old artist likes to listen to John Kaizan Neptune and Earl Klugh—mellow fusion jazz from the late ’70s and early ’80s—while working.

For Capili, the sound texture of vinyl, and more recently, analog tape, is essential to the experience. “I prefer the original albums, I don’t care if there’s ‘popcorn,’” he says, referring to the surface noise, the ticks and pops of vinyl platters.”

Luckily, about 10 years ago, Capili had his studio in the Bangkal neighborhood of Makati—ground zero for used records and thrift store hi-fi equipment. He soon amassed a sizable collection of vintage audio equipment and used LPs and tapes, including a Gramophone for playing old 78s and a working Wurlitzer jukebox.

“When you find a 45 that you’ve been looking for, it’s like a high,” he says. “I also like the ritual of taking a record out, washing it with liquid detergent, and cleaning it.”

Few have taken the love of music to the extremes of mania that painter Romeo Lee has: Every room in his house is packed floor-to-ceiling with stereo equipment, CDs, cassettes and vinyl LPs, not to mention music DVDs. Despite his punk credentials and notoriety as frontman for the Brown Briefs, however, Lee listens mostly to classic pop from the Beatles and the Bee Gees and ’80s new wave artists such as Nick Lowe and Elvis Costello.

Although his profile has risen steadily in the contemporary art scene, Lee is also well-known in vintage stereo circles as a legendary picker with an uncanny knack for sniffing out rare and hard-to-find hi-fi components, and an obsessive hoarder of same.

Occasionally, the three artists’ music obsession creeps into their artwork. In one of Capili’s recent multimedia works, he managed to incorporate a record player into the finished artwork. Lee has painted still lifes of his stereo equipment. And Borlongan has included speakers, cassette tapes and headphones into his own personal iconography.