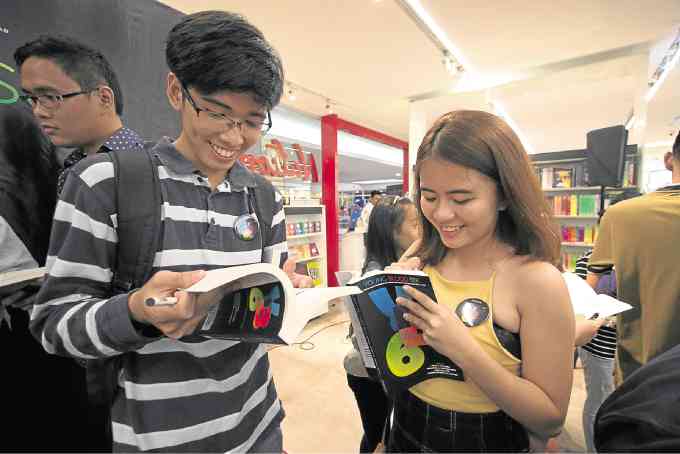 They have voices: The ‘Young Blood Six’ phenomenon

It would have been the perfect birthday present—had he known about it.

But it took Ryan L. Faura more than two weeks before finding out that his essay—“From hair to eternity,” where he detailed his insecurity about his “receding hairline” and the endless teasing he endured because of it—was published in Young Blood, one of the most popular columns of the Philippine Daily Inquirer’s Opinion section.

The piece, Ryan’s first-ever published written work, came out on Sept. 8, 2015, exactly a day after his birthday. The 29-year-old English teacher said he wasn’t even able to get a hold of a physical copy of the newspaper issue, a missed opportunity that he said he regrets until now.

But “super sad” was the last thing you would describe Ryan on April 22 at the launch of the book “Young Blood Six” (“YB6”) at National Book Store at SM City North Edsa in Quezon City. Though “shaking and sweating like crazy,” Ryan was all smiles and full of infectious humor as he read excerpts from his essay in front of his peers during the event.

Ryan’s tale of his battle with baldness is but one of 75 essays published under the Young Blood column from 2014 to 2015 that were chosen to be included in “YB6,” the sixth volume of the Inquirer Books’ best-selling Young Blood collection of essays.

The column, considered by many young Filipino writers a part of their bucket lists, comes out three times a week and has been published by the Inquirer since 1994. The Opinion section is often deluged by entries, receiving as many as 300 essays weekly.

The Young Blood column, as Super associate editor Ruel S. De Vera said, is “about the experience, the insight, the heartbreak, the victory of our young Filipinos.” “It is the guitar solo in the middle of a fantastic song, it is the punch line at the end of a hilarious meme, it is the twist in the story that you never saw coming, it is the highlight of our lives,” he said during the launch.

Opinion editor Rosario A. Garcellano—one of the book’s four editors—considered the sixth volume of the anthology a “milestone.” “When I was as young as you are, it was a thrill to get published,” she said. “I’m glad it’s still a thrill now.”

Garcellano, who acts as the column’s St. Peter, manning the Young Blood pearly gates and unlatching the door to the lucky few who make the cut, said that “a happy result” of this project is two young writers from this latest pool of Young Blood contributors are now some of the newest voices in the Inquirer Opinion family.

Dr. Kay Rivera, who wrote about the trials and travails of online dating, and Hyacinth J. Tagupa, who tackled the many shades and complexities of feminism in her essay, are currently regular contributors to the column IAmGenM, which comes out once a week.

If you think getting published in Young Blood is no easy feat, just imagine the culling—a la “The Hunger Games” or “Battle Royale” according to De Vera—that had to be done to select the best of the best for the anthology. “Consider yourselves very much the cream of the crop,” De Vera said to the 41 Young Blood writers present or represented at the launch. “I’m sure when you read these essays you’ll realize that these all deserve to be there.”

Rufino, who confessed to going “off grid … terrifying my staff because they know they won’t be able to reach me” during the “YB6” selection process, emphasized the power and permanence of the long-form published work, especially in the age of “nanosecond bursts.”

“One thing that books have, that the long form has, that social media or mobile will never have, is permanence,” the Inquirer Mobile director said. “[Books] are permanent. You can’t do the whole ‘I’ve taken down this tweet.’ You cannot unwrite, unpost, or unpublish a book or anything on the printed form. It’s forever—whether you like it or not.”

“YB6” is a colorful, smart, thoughtful, and diverse collage of personalities, opinions, experiences and thoughts of the Filipino youth. As Pastor shared, it’s like the Project Pie pizza served exclusively during the event that shares the book’s name: meaty, fresh, spicy, sweet and surprising.

It reveals how this generation—the often-maligned millennial generation—cannot be boxed in by the unfounded terms, labels and generalizations ascribed to them. They have a voice—they have voices, brave, distinct and individual.

The various essays at times read like a love letter, a debate, a rant, a confession, a soliloquy, a discussion, a journal entry, a eureka moment, a cry for help, a protest, a secret, and a demand for change.

In these entries, these young writers pour their hearts out as they reveal their vulnerabilities and insecurities. From struggles with height, weight and thinning hair, to existential crises, to stage fright, to professional inadequacy, to battles with depression and self-harm, to the fear of dying with unrealized potential.

They write about their dismay and dissatisfaction with government and society: hellish transportation services, toxicity of ignorance on social media, widespread religious persecution, domestic instability, social prejudice and injustice, and campus violence.

But “YB6” also gives space to the youth’s hopes, dreams and wishes for acknowledgment, romance, happiness and success. They speak about the many permutations of love—romantic, familial, patriotic—and its various facets and evolutions. They discuss friendships and families. They even rave over their many pop culture obsessions.

What all of these essays have in common—be they about pasta carbonara, grief over the death of a loved one, dogs, secondhand books, biking, depression, online dating, the thousands of songs on Spotify, and, surprisingly, zombie television shows—is these are all part of these young writers’ journey of self-discovery.

After getting published in Young Blood, Ryan realized that his work is worthy of publication, especially in a national broadsheet. “I thought nobody would want to read my work, because I like using words not commonly used,” he said.

“I thought I was very unreadable. But when I was [published, I realized] somebody was reading my work,” said Ryan. “It’s a liberating process,” he added.

For Mariejo Mariss S. Ramos, writing her essay “Old books’ home” was vital in her ongoing search for her identity. “I think because that time, I wasn’t sure whom I wanted to be and where I wanted to go,” she said to Super in an interview after the launch. “I didn’t know if I really wanted to be a journalist, or if I was in the right place.”

“By declaring my love for it—book hunting, secondhand-
book stores—I didn’t exactly find myself,” said Mariejo, also an editorial production assistant and contributing writer at the Inquirer. “But I finally found something that I can say that I really know about myself, about my entire identity.”

Darlene T., who wrote about the ups and downs of living with depression and the stigma that comes with it, also expressed shock at her essay being published in Young Blood. “I always thought the Inquirer wouldn’t deem it worthy to be published,” she said.

“I was going through hell at that time, truth be told,” Darlene said about the wee hours in the morning she found out her essay was chosen for the column. “It was after midnight when I found out. I was surprised. It lifted my mood. I just felt happy.”

“I wrote it as a way to reach out to people who also struggle like me,” Darlene said of her essay “My life with the Big D.” “If they can find just a little drop of hope from my story, then I’m happy. I feel thankful,” she added.

At the end of the ceremonial presentation of “YB6” writers, who received copies of the book and a Guyito plush toy from book’s editorial team, Opinion editor Garcellano highlighted the importance of writing, particularly in a time when truth is assailed by demagoguery, propaganda and outright lies. She also emphasized the value of the written word in the age of trite tweets and generic, impersonal online posts.

“May we never lose faith in the written word even in this age of alternative facts, fake news, limited attention span, 140-character declarations,” Garcellano said. “And may you always receive declarations of love in an essay—not merely in a tweet.”

De Vera, who hosted the event, also reminded the audience that it’s not too late to get themselves published. “If you’re 30 already, sorry,” he said, “but if you’re 29, you have a few more months remaining to try to make it into the Young Blood list.”

“There’s still time,” he added. “You can still join the legacy.”