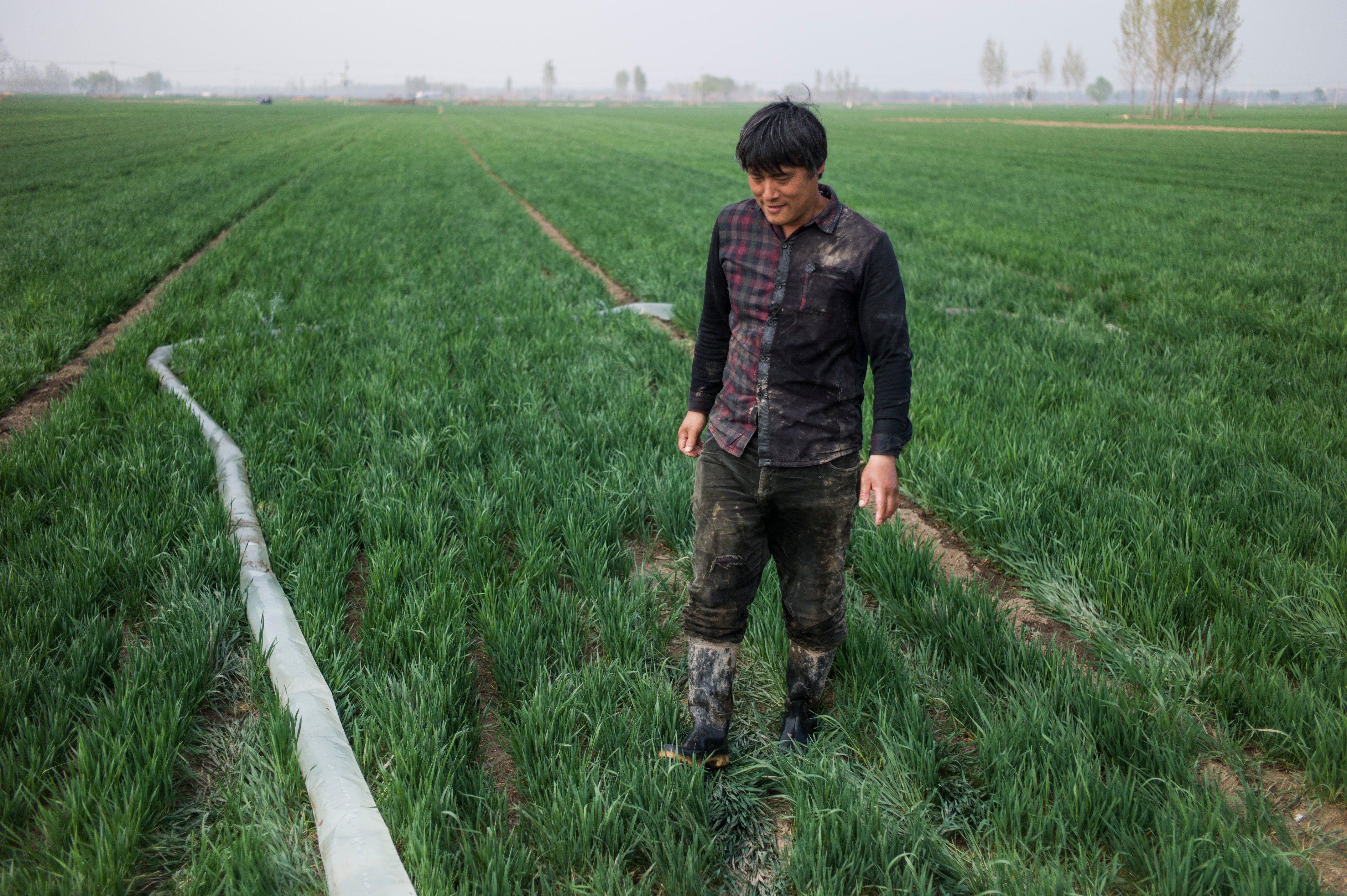 A farmer works in his field in Anxin, in China's Hebei province, on April 5, 2017. China will create a new special economic zone outside Beijing similar to those established in Shenzhen and Shanghai, the government said, in a bid to boost flagging growth and reduce the strain on the capital. / AFP PHOTO / FRED DUFOUR

The urban farm craze is finding fertile ground in New York, where 10 young entrepreneurs are learning to grow greens and herbs without soil, bathed in an indoor, psychedelic light.

In a “hothouse” of invention in a Brooklyn car park, each farms a container, growing plants and vying for local clients in the heady atmosphere of a start-up, fighting against industrially grown food, shipped over thousands of miles.

Meet the farmer-entrepreneurs at Square Roots, a young company with a sharp eye for the kind of marketing that helps make Brooklyn a center of innovation well-equipped to ride the wave of new trends.

“It is not just another Brooklyn hipster thing. There is no doubt the local real food movement is a mega-trend,” says Tobias Peggs, one of the co-founders, a 45-year-old from Britain who previously worked in software.

“If you are 20 today, food is bigger than the internet was 20 years ago when we got on it,” he adds. “Consumers want trust, they want to know their farmers.”

He set up Square Roots with Kimbal Musk, brother of Tesla Motors billionaire Elon, and they have been training 10 recruits since November.

Already well-established in parts of Europe — the Netherlands in particular — the technology is still being pioneered in the United States.

The greens are reared in an entirely closed and artificial environment that can be completely controlled, grown vertically and irrigated by a hydroponic system that feeds them water mixed with minerals and nutrients.

Wylie Goodman, a graduate student finishing a dissertation on urban farming at Cornell University, says the US financial capital was a captive market for the innovations.

“It makes total sense,” she said. “You’ve got a well-educated and wealthy population willing to pay a lot for good local food” — in this case $7 per single pack of fresh greens delivered to your door.

New York and its environs have seen constant innovation in urban agriculture from rooftop gardens to the huge AeroFarm complex in neighboring Newark and Gotham Greens, which grows greens and herbs in ultra-modern rooftop greenhouses that can be harvested before breakfast and on a New York plate for lunch.

Halfway through his year-long apprenticeship, Peggs says the 10 young entrepreneurs have already learned how to grow food customers want to buy.

The next stage will begin within a year, he says, with the creation of “campuses” capable of producing greens — similar to the one in Brooklyn — in other large US cities before the initiative rolls out “everywhere.”

His enthusiasm is contagious. Around 100 people who took part in a guided tour of the farm this week, were for the most part not only willing to shop the greens but also appeared to be mulling over setting up something similar.

But there are downsides to the business model.

If indoor farms can be adapted to grow strawberries and blueberries, “no one with a background in agriculture” thinks they will replace traditional, soil-based farms, Goodman says.

Moreover, products with a denser biomass, such as cereals or beets, are out of reach for the moment. “If I grew beets, I would have to sell it for $50 a head,” Peggs joked.

The working conditions are also an issue.

“Do you really want to work in an enclosed, glowing environment?” Goodman asks.

Besides, the lighting is too expensive and cultivation spaces at reasonable cost too few, at least for now.

Those questions are already being addressed by some apprentice entrepreneur-farmers at Square Roots.

Electra Jarvis, 27, joined program after earning a masters degree in environmental sustainability despite having “never grown a plant before.”

In just a few months, she mastered the process and already has 20 clients for her bags of salad leaves, tagged “Grown with love by Electra Jarvis.”

But if she’s happy to learn how to turn “dead space” into “a productive green space,” she’s not sure it’s really for her.

“I miss the nature,” she said. “I prefer to be able to grow outdoors.”