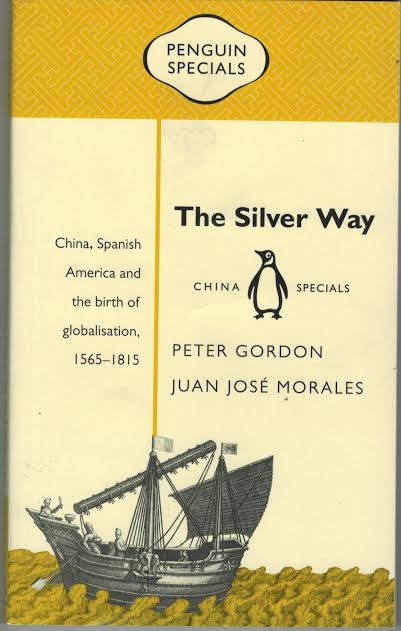 A new book on the fabled Manila Galleon Trade was launched in Hong Kong in February and in Manila recently by Penguin Books titled “The Silver Way: China, Spanish America and the Birth of Globalisation, 1565-1815” by Peter Gordon and Juan José Morales.

The book starts and ends with the friar navigator Andres de Urdaneta, who they consider has been unjustly neglected by Anglo-Saxon scholarship because he did not, unlike Columbus and Magellan, “discover” anything.

His achievement was to find a way of crossing the Pacific Ocean eastward, the tornaviaje, thus making two-way navigation and trade possible in that broad ocean. For the first time in human history, commercial routes completely girdled the globe. The world after 1565 was very different from the world before 1565.

The main features of that trade are mentioned: the hardships of the long and stormy eastward crossing; the silk-for- silver exchange that was its principal characteristic; the use of silver as the first international currency; the restrictions and evasions that overhung the trade, the large role of Filipino sailors in manning the vessels; the migration of people between the Americas and the Philippines; the introduction of New World plants that enriched Asian agriculture and diets.

The present work instead presents the galleon trade against a broader background of history and geopolitics revolving around China.

That country was the richest, largest and most industrial economy before the 18th-century Industrial Revolution, providing the rest of the world with the output of its industries.

For two millennia, Chinese goods had flowed westward over the famous Silk Road, traversing several political jurisdictions, thus rising in cost as they bore multiple taxes. The end of what the authors call the Pax Mongolica and the fall of Constantinopole to the Ottoman Turk in 1453 blocked this road, and the maritime powers Spain and Portugal sought ways of circumventing the obstructions.

The Portuguese found this by rounding Cape of Good Hope and sailing to India and the Orient. The Spanish, following Magellan, found this by crossing the Pacific and, with Urdaneta’s tornaviaje, initiating the Manila Galleon Trade.

Chinese goods could now go from China through Manila, Acapulco, Mexico, and Vera Cruz to Seville under one political jurisdiction. This obviated the necessity of paying onerous taxes along the way, cheapened the cost of Chinese manufactures, and made them accessible not only to the wealthy but also to ordinary people.

Manila became a regional trade hub and East Asia’s first primate               city (although this term is not used by the authors) two centuries ahead of the   other East Asian centers.

Mexico is tagged by the authors as the first world city where the products and peoples of Asia, Europe and the Americas met and mingled, two hundred years ahead of Paris and London.

China was economically self sufficient and needed to import nothing except silver for its currency. Already it raised the ambitions of military men like Governor Sande’s   hare-brained scheme to conquer that country in 1576, which Philip II prudently archived. (China would be subjected to gunboat diplomacy long after the galleon trade had ended, with the Opium Wars against Great Britain.)

This is questionable from an economic point of view in which globalization has a precise meaning, namely, the convergences of price levels and the integration of economies. With the restrictions hobbling that trade, there was never enough leeway for normal economic forces to work themselves out.   At best the trade was the beginning of globalization. Interdependence did not mean integration.

More questionable are migration figures. As many as 100,000 Asians are estimated to have migrated to the Americas during the 250 years of the trade.

Since there was most of the time one ship a year for 250 years, and each ship carried 400 to 500 passengers, this would have meant that all galleons passengers were Asian migrants to the Americas.

Even half of the figure results in a rather high estimate of migration. I am more inclined to go along with this lower figure of 40,000.

The terminal date they place for the trade is 1815. This is technically correct for the galleons which were large government vessels. But the Acapulco trade and the flow of silver to China continued unabated, within the ceilings prescribed for the galleons, by private traders using smaller vessels until Mexico’s independence in 1821.

Even after that, Mexican silver continued to go to China in the trading voyages of Yankes and other vessels. “Dollars Mex” were used in China into the 20th century.

One puzzling error is the misspelling of the name of the Procurator General of the Philippines in 1637 as Juan Grau y Malfalcon in three places in the text, which the notes carry correctly as Monfalcon.

This does not affect the substance of the narrative, but is an annoying blemish in an otherwise excellent work.

The book expands into contemporary geopolitics with reflections on China’s recent economic resurgence and the possibility that it may regain its primacy among the world trading countries.

The book concludes that “the story of one increasingly integrated world begins in the Pacific around 1565 and not in the Western Europe of the mid-18th century.” This means Urdaneta and Manila were at the beginning of modern world economic trends—something for Filipino historians to ponder. —CONTRIBUTED