Going for gold in the Olympics of Theater Design | Inquirer Lifestyle ❮ ❯ 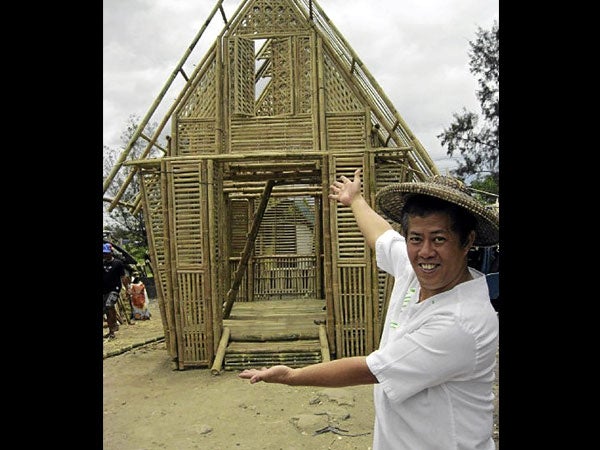 Going for gold in the Olympics of Theater Design

The next Olympic Games aren’t scheduled until next year in London, but already  a team of theater practitioners and set designers has been going the distance to ensure that the Philippines is well represented in this major international event held every four years.

Under national curator Rollie de Leon, a renowned set designer who specializes in Filipiniana and is a personal protégé of National Artist Salvador Bernal, De La Salle University students have been working long hours the past year to design and build the country’s exhibits.  The exhibits will be entered in the 2011 Prague Quadrennial of Performance Design and Space (otherwise known as PQ 11), scheduled from June 16-26 in the picturesque capital of the Czech Republic.

De Leon describes the event as the only exhibition of its kind and magnitude in the world as it showcases the best examples of current practices in the performing arts’ production design, technology and theater architecture.  “It is widely viewed as “the Olympics of performing arts design,’” he adds.

And while Olympic competitors have their sights set on one goal –bringing home the gold – De Leon and crew are similarly focused on a shiny, gilded object.   The Philippine team is hoping to win the coveted “Golden Triga,” a horse-drawn sleigh-shaped award, and the Quadrennial’s highest honor.

Exhibitors’ entries are presented in three distinct categories. The national section highlights the work of professional theater companies from each country.  The architecture and technology section focuses on innovations in architectural design.  And “Scenofest” features the best work created by students.

The multifaceted event has been held in the Czech capital every four years since 1967.  This year, it will feature works created by theater professionals and students from 76 countries.   In addition to displays by participating nations, the event provides a networking opportunity for theater professionals from every continent, and includes lectures, panel discussions, installations and performances.

Although most activities will be focused on the exhibits to be displayed in Prague’s national gallery called the Veletzrini Palace, performing arts activities are planned at venues throughout the city during the 10-day event.   The Philippines will be presenting both Iloilo’s Sinagnayan epic and dances from the Kaamulan festival of Bukidnon.

The Philippines’ participation is under the auspices of ITI-UNESCO, with invaluable support from the International Container Terminal Services Inc, DLSU’s Harlequin Theater Guild, Bukidnon State University, NCCA’s PIAF Arts Ambassador Boy Abunda, and Manila Broadcasting Company (MBC), whose annual cultural event called the Aliwan Fiesta will be highlighted by both the national and student pavilions.

In his role as national curator, De Leon made sure that the physical exhibits are realized and put together.  He also enlisted the support of a team of professionals to coordinate and facilitate the entire project.  The team includes writer Henry Tejero, who conceptualized the performances to be presented, lights designer Joey Nombres, Music Theater Foundation’s Joy Rago as project administrator, choreographers Nonoy Froilan and Edna Vida, Allen Velez of the Advertising Suppliers Association, and Susan Isorena-Arcega, PR Consultant of MBC, who will coordinate media coverage for the event while serving as managerial advisor to the students of De La Salle.

“Filipino set designers have their dream,” notes De Leon.  “We also want to be recognized for our work, especially since product design has become a field where Filipinos are highly respected.   Since 2007 when I attended the last quadrennial in Prague, I’ve tried to figure out how to make it happen. We’re doing this for the country.”

A lot of what De Leon has done involved estimating costs and figuring out the design and engineering details of the Philippine pavilion. He decided to focus on bamboo, and solicited production photos, video displays, renderings, scenic models, costumes, designer statements and bios from various production groups in the Philippines.

The De La Salle students meanwhile made sure that people charged with designing the lighting and painting the sets met the production deadline.  Simultaneously, they set out to market the project and enlist sponsors to fund their participation, which will extend to a national tour when they arrive back from Prague.

Apart from the sheer volume of materials that need to be presented, both the Philippine entries have to be built over several months, torn down, packed, and loaded into a shipping container. Then it would be unpacked and rebuilt in Prague in four days.

“It’s really very much like touring a show,” says Arcega, former Assistant Director of the British Council and a cultural arts specialist who will be travelling to Prague with the rest of the production team in June.  “Like good scouts, team Pinoy should be prepared for anything.”

This includes coping with team mates who suddenly quit, as Martin Frias, student curator from De La Salle, found out.  Fortunately for him, five intrepid women stayed to help him put up the Philippine booth, only three of them from DLSU (Charisse Ang, Stefanie Lim, and Carmi Mora).  The fourth hand is from the College of St Benilde (Suzie Quiban), while another is an on-the-job trainee from Far Eastern University (Catherine Hipolito).

The DLSU group, a ragtag team at best, decided to invoke Philippine mythology and folklore in the concept of the exhibit, which will be marked by a stylized balete tree.   There will be a mural of a Philippine jeepney which situates the student booth within the context of a tour throughout the archipelago.

De Leon explains that after the Philippine exhibit has been displayed in Prague, the bamboo edifice will be left with the Philippine Embassy, while the student exhibit will be brought home for a national tour to Baguio, Manila, Batangas, Bacolod and Cagayan de Oro.   Work exhibited in the Quadrennial will also be documented in a catalog and DVD.