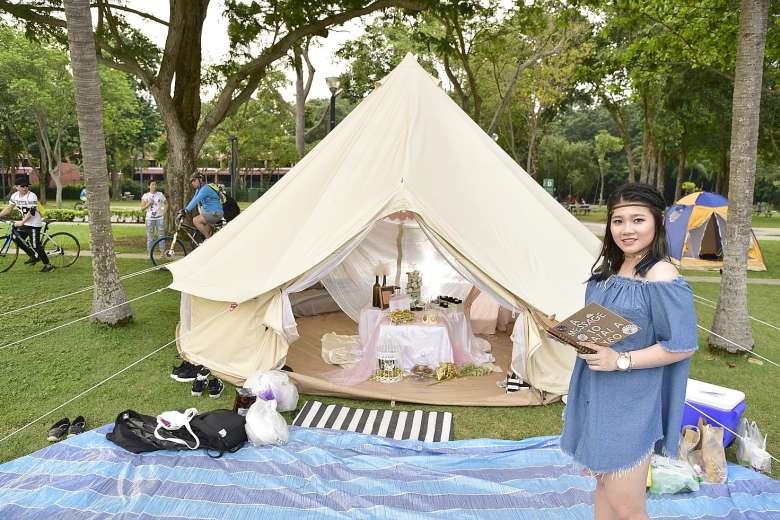 Ms Natalia Yeo celebrated her birthday by glamping with her friends. She said the experience was "very Instagram- worthy". The Straits Times/Asia News Network/DESMOND WEE

Glamping catching on: Outdoor fun with all the indoor creature comforts

For those who want to go camping but do not wish to rough it out, there is glamping.

Six-year-old Goh Jun Yi did that last Saturday at East Coast Park. His mother and the parents of several of his pre-school mates rented a 5m-wide tent that was big enough to fit four single-sized beds.

Yes, they slept on air mattresses for their one-night stay.

A handful of glamping providers have sprung up in the last one to two years, tempting pampered urbanites with the promise of nature and creature comforts.

The glamping packages often include airy tents, air mattresses and pillows, lights, fans, hammocks, picnic tables and chairs and even breakfast or dinner.

But the authorities warn that such businesses need prior approval to operate in local parks and beaches. Last year, the National Parks Board (NParks) issued some 30,000 camping permits, or 2,500 a month. In 2010, about 21,000 permits were given out.

The hassle-free experience, which cost the group $168, was enough for Jun Yi to plead: “Can we stay here for two more days, mummy?”

The glamping option even persuaded Madam Toh Kim Lian, 72, to join the group.

“I agreed to sleep outdoors with my granddaughters only after I saw that the tent looked like a Mongolian yurt,” she said.

The glamping phenomenon has been the rage globally for the last five years.

Britain, for instance, has seen a 118 per cent year-on-year rise in Google searches for glamping, which peaks in the run-up to holidays.

Although it first arrived in Singapore around 2012, the craze died and glamping providers then dropped out of the game. The trend first emerged among safari camp operators in Africa, who wanted to provide well-heeled guests with a little luxury without having to incur the costs of erecting a chunky, permanent structure.

For $150 a night, she helps the customer pitch a bell-shaped tent at designated camping spots on the beach. The tent comes with bedding, lighting, snacks and drinks, a USB charger and a children’s pool.

“A number of our customers are millennials and there is a movement among millennials to collect memories, not things, so some like such experiences,” said Ms Chia. She gets about 10 bookings a month.

Mr Azmi charges $230 a night for a tent that can fit 12 people. His customers are mostly families, although he has rented out tents to teenagers from a mosque and a school.

“The cost factors in the manpower and time it takes to transport and set up the tent and other items, as well as cleaning them,” said Mr Azmi.

Ms Chua said: “In Singapore, we still do not have the full-fledged glamping experience yet, but at least the kids do not have to sleep shoulder to shoulder with one another.”

State parks in some countries, such as the United States, have designated areas for glamping facilities that can come with electricity, air-conditioning and even a butler service.

Camping here is allowed only at certain areas in East Coast Park, Pasir Ris Park, West Coast Park and Pulau Ubin. Campers must apply for permits, which are free, online or at AXS machines.

Some glamping providers apply for the permits on behalf of their customers. NParks told The Straits Times that this is not allowed and that “businesses offering glamping or camping experiences in its parks would need to seek prior approval from NParks”.

Said an NParks spokesman: “Each camping permit is valid for one main camper and five other campers in the same tent, for up to four days.”

Ms Natalia Yeo, 19, celebrated her recent birthday by offering her friends a glamping stay. Last Saturday, her friends were seen busily snapping photos inside the tent.

Said the teenager: “I have not seen people doing this before, so I want to be among the first trendsetters. It is definitely very Instagram-worthy.”