Why the Test Kitchen is a real test | Lifestyle.INQ ❮ ❯ 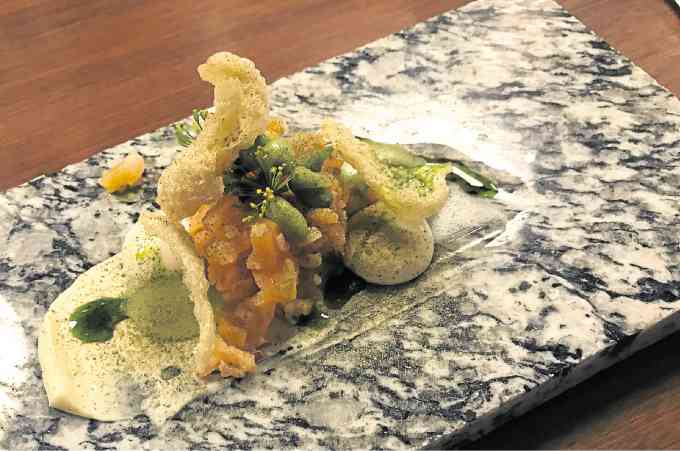 Why the Test Kitchen is a real test

The lead time for the reservation at The Test Kitchen is a week or two for a weeknight, and about three weeks to a month for weekends. I mention this not to put you off, but so that you can ready your phones.

No queue-jumping please: I don’t understand why there are Filipinos willing to patiently wait six months for a reservation in a Michelin-star restaurant, but would rather ask a friend of a friend to whisper in the ear of the chef to be accommodated in a local restaurant.

The Test Kitchen has only 22 seats and two tables, which means you may find yourself elbow-to-elbow with a stranger.

You’ll also discover that you are actually seated in the kitchen itself—not just an open kitchen which typically has a “pass”—a restaurant’s term for the counter where food is passed from the kitchen to the front-of-house staff, where the chef usually does last-minute checks of the food, and which psychologically delineates the kitchen from the dining room.

At The Test Kitchen you’re still a safe distance not to get splashed by oil from stoves, but only just about.

You’ll also have no idea what the chef, Josh Boutwood, will cook for you that evening. I like this because, among other things, I’m lazy and don’t want to be bothered with ordering. Like a Japanese omakase, it’s giving the chef free rein. I’m just going to sit here and I’d like you to come around and put delicious things in front of me every few minutes.

But Boutwood will ask you, when you make the reservation, if you have any dietary restrictions, so that would probably be the best time to speak up. He will ask you again before commencing the meal.

Boutwood looks Filipino but, disconcertingly, speaks with a middle-class British accent. His résumé is impressive. He has worked in various fancy places, including Le Manoir aux Quat’ Saisons, but his most recent posting before he opened The Test Kitchen is as executive chef of The Bistro Group, a conglomerate that operates various restaurants around Manila.

The Test Kitchen is Boutwood’s most recent, most ambitious frontal assault on the fine-dining scene in Manila, which has been primed for this sort of chef-led dining experience, thanks to chefs like Bruce Ricketts.

It’s no secret that degustation menus stack up the odds in favor of the chefs, who don’t have to prep the way they would for an à la carte menu, for which you have a certain amount of waste depending on what people decided to order that night.

By forcing everyone to order the same menu, a chef can confidently work with more expensive ingredients, and do more intricate or elaborate procedures.

The tricky part is consistency. Once you’ve committed to a certain menu for the season, you have to push through with it even if the greens are sub-standard or the grouse that the hunter brought in is a bit thin, because it’s what the customer signed up for, often months in advance.

Making the menu a surprise shifts all the advantage to the chef, but at the same time it puts the pressure on him. If all the cards are stacked in your favor and you can’t come up with something pretty amazing, there’s no one left to blame.

Our meal at The Test Kitchen was very good, indeed. The menu listed five courses, but we ended with seven—surprise!

Boutwood came around himself to explain—very briskly—what the servers had put before us. We had cured salmon with chicharon. (Topping things unexpectedly with chicharon seems to be very au courant, but it worked well enough.)

Then we progressed through halibut and a pink slice of pork, an engaging piece of sous-vide wizardry.

The first of the unlisted dishes was a delightful bowl of cereal, barley if I remember correctly, with a savory cream sauce. It was amazing.

There was a tiny smidge of lamb, before the main course, a slice of US beef, aged in-house for 14 days.

This was not as good as it could have been—the beef lacked the intensity of a well-aged cut, and the texture less pliant than was possible.

The Test Kitchen is an interestingly apt name for the place. It is, among other things, testing Manila’s maturity as a dining scene, because many of those who consider themselves gourmets, gourmands, foodies, etc. are actually quite reluctant to hand over total control of their meal.

They are also often in search of the same old flavors, like familiar tropes in a soap opera or crime procedural.

Its more literal sense, of course, is that it is Boutwood’s mad-scientist laboratory, where he conjures up new flavors and dishes like a medieval alchemist (as he has been nicknamed).

But ultimately—and I think he is well aware of this—it is a test of Boutwood himself, not just whether or not he can prove his mettle before the fussy and demanding Manila crowd, but also if he can constantly outdo himself every week. That is a tall order.

I recommend this restaurant heartily, and anyone who’s interested in running his finger along the edge of fine dining in Manila should go and make a reservation.

But I really feel that this restaurant is more of an ascent than a summit, that this is only a beginning for a very talented chef. Whether he can live up to his own promise, I believe, will be the real test.