The warmth and Filipino hospitality of the Asean dinner | Lifestyle.INQ ❮ ❯ 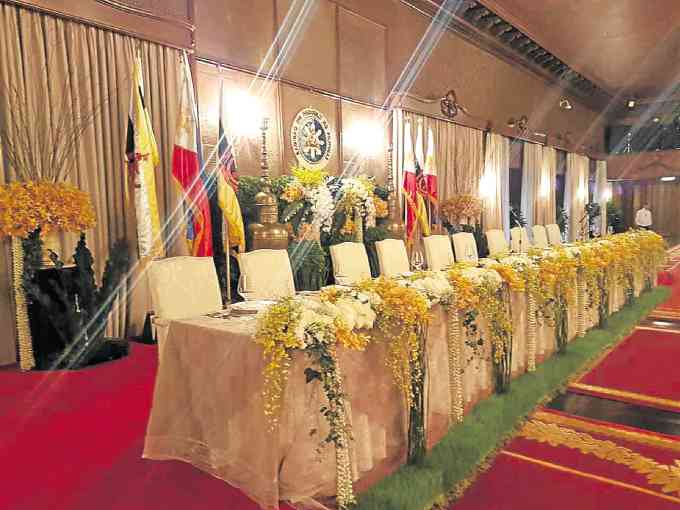 State dinner for the Sultan of Brunei

The warmth and Filipino hospitality of the Asean dinner

Philippine traditional crafts and talent, as always, shone in the gala dinner of the Asean Summit at Sofitel Manila last week.

The event was organized by the Malacañang Office of the Social Secretary with the Cultural Center of the Philippines. Malacañang planned the menu with Sofitel and set the direction with consultant and former CCP president Nestor Jardin and director Monino Duque (former CCP technical director) for the cultural presentation.

The design motifs were inspired by the Feast of San Clemente or the feast of the fishermen in Angono, Rizal, the Singkaban folk festival of Bulacan, and the Pahiyas, the harvest festival in Lucban, Quezon.

Higantes, 12-ft tall papier-mâché and rattan characters— the main attraction of the San Clemente fiesta—were garbed in the costumes of the Asean member countries. They lined the hotel ramp.

Dancers from the Ramon Obusan Folkloric Group swayed to upbeat music, as the 100-member Dasmariñas Citizens’ Brigade Band welcomed the guests at the entrance—a revival of the banda tradition.

The singkaban (bamboo artworks) decked the entrance, the corridors and function room foyers. The Singkaban is an annual festival that celebrates Bulacan’s history and culture. Panels with arches of bamboo shavings, shaped into sunburst patterns, flowers, fans, geometric shapes, made the spaces cozier.

Cruz explained that the singkaban is put up in fiestas and milestone celebrations such as baptisms and weddings. CCP worked with an artisan family from Bulacan, who has been making bamboo crafts for several generations. The singkaban design of the main set was given a contemporary feel.

Along the singkaban-lined corridors and with banderitas on the ceiling, the atmosphere became festive with the tableaux of performers depicting the exoticism of Mindanao and the rural life in the different regions.

The heads of state and other VIPs went to the holding room, the Romblon Room, which had the four islands of Kish’s signature setting. In one setting, the Gregoria Lounge Chair, the award-winning design using antique balusters for backrest, was surrounded by the Binhi, seed-shaped woven seaters holding plants. The Binhi recently won Golden A’ Design Award at the Furniture, Decorative Items, and Homeware Design Competition in Como, Italy.

Creating a relaxed, elegant vibe were Kish’s Juana—the black-and-white curved outdoor chairs—the Basilisa furniture collection made of regional weaves, and the B-Luxe, the chic version of the batibot.

(lapu-lapu) in Lime Sauce, with heirloom rice. The Coconut Cream in Chocolate Shell (tsokolate at gata) was served on a plate engraved with sun rays from the Philippine flag. The pièce de résistance was the Sweetened Fruits with Yam in Young Coconut (halo-halo).

The VIPs and the delegates must have felt at home listening to the music of their homeland. Over dinner, the Philippine Philharmonic Orchestra Chamber (PPO) alternated with the JASMS Rondalla ensemble playing Asean folk and popular tunes.

The concert started with “The Asean Gold Overture,” a medley of music, composed by Ato del Rosario, featuring the musical instruments of the member nations, performed by the PPO under the baton of Hermenegildo Ranera and the Asean Gold Traditional Music Ensemble.

Robert Delgado arranged the nostalgic suite of pop songs from the ’60s and ’70s, performed by prominent singers, fashionably styled by designer James Reyes. Lending the glam factor was the presence of Bb.Pilipinas-Universe 2016 Maxine Medina.

As in typical Filipiniana programs, the night ended in fiesta celebration, with tribal drumbeating.

Jardin said, “We showcased signature hospitality. It was the best of Philippine arts and culture. All aspects of the event were well thought of. Our guests genuinely felt our warmth and love for merriment.”—CONTRIBUTED