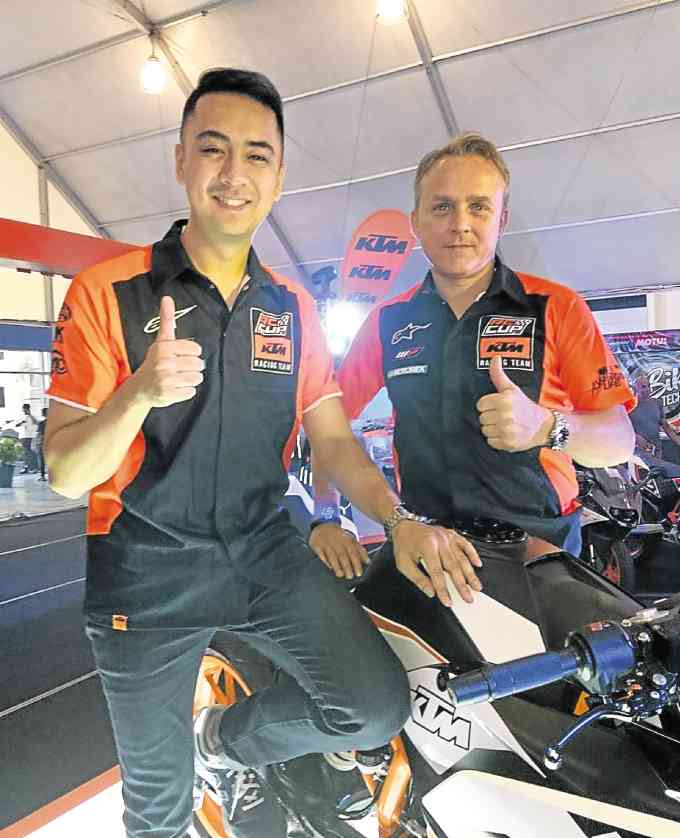 Of Kris, Doc Vicki, Paulo Avelino, Shintaro and other ultra-lookers

KTM Philippines made waves during the recent 11th Inside Racing Bike Festival and Trade Show, the biggest gathering of motorcycle manufacturers and enthusiasts held at the World Trade Center.

Introduced during the event was 18-year-old racing wunderkind Ralph Kenneth Torres, the first sponsored rider to the KTM RC Cup Asia, which will be held during the Sepang International Circuit in Malaysia, March to November. Torres has over a decade’s experience on the track, bagging loads of trophies both locally and internationally.

Top dermatologists in the country gathered at the Makati Shangri-La’s Isabela Ballroom recently to celebrate the only US FDA-cleared noninvasive lifting procedure, Ultherapy. It’s a procedure that lifts and tightens the skin on the face, neck and décolleté using ultrasound technology that stimulates the body’s own natural healing process to produce new collagen.

Executives and experts from the owner of Ultherapy, Merz, were present during the event including Merz Asia Pacific CEO Lawrence Siow, Merz Asia Pacific regional medical director Owen Sunga, Merz Philippines Healthcare Inc. country manager Jorge Libanan, and dermatologist Fang-Wen Tseng.
“Merz is a privately-owned company based in Germany,” said Siow. “We are dedicated to the development of safe and innovative minimally invasive aesthetic treatments and solutions.
“Our products and services are now present in more than 90 countries, and that includes Ultherapy here in the Philippines.”

Emcee was Angel Jacob, who introduced the face of Ultherapy, Kris Aquino. Kris was looking radiant and youthful, dahlings.

“As soon as I heard about it, I became super interested. It promised me results that would look natural,” Kris said.

“The last thing I wanted was a drastic change that gave me a totally different look. I wanted something subtle, just for a fresher and younger look.”

“Ultherapy gave me exactly what I wanted.”

Ultherapy is holding an “authenticity campaign” involving 23 clinics that offer the treatment in the Philippines: authenticity stickers are found on the doors of these clinics and on the machines.

Partner clinics were awarded Authenticity Plaques, including the Belo Medical Group with the fabulous Vicki Belo receiving the award; Advanced Aesthetics Clinic Co., owned by Venia Javellana, who happens to be Kris’ dermatologist; and Aivee Institute, among others.

“We are truly glad to be offering this breakthrough beauty treatment to the Filipino market, and very proud to be part of your beauty journey,” said Siow. “Cheers to good health and good looks!”

As part of its 50th anniversary, Miladay inaugurated its new home at the Ayala Malls’ The 30th in Pasig. The store has a beautiful backdrop of modern elegance mixed with a young chic vibe because of its rich wood veneer finishing and hints of gold.

During the opening there was a display of dazzling diamonds, stunning pearls and sparkling sapphires, rubies, plus bright gold pieces.

Teo told the Dayrit siblings how she grew up with Miladay jewels since they were usually gifts from her mother during her birthday, Christmas and graduation. “In fact, I was wearing Miladay jewelry when I got married,” Aivee said.

Janeena Chan hosted. Guests were treated to an exciting afternoon of cocktails by chef Jessie Sincioco, soothing music by the Manila String Machine, games and fabulous prizes including a dazzling diamond ring from Miladay’s Classics Collection.