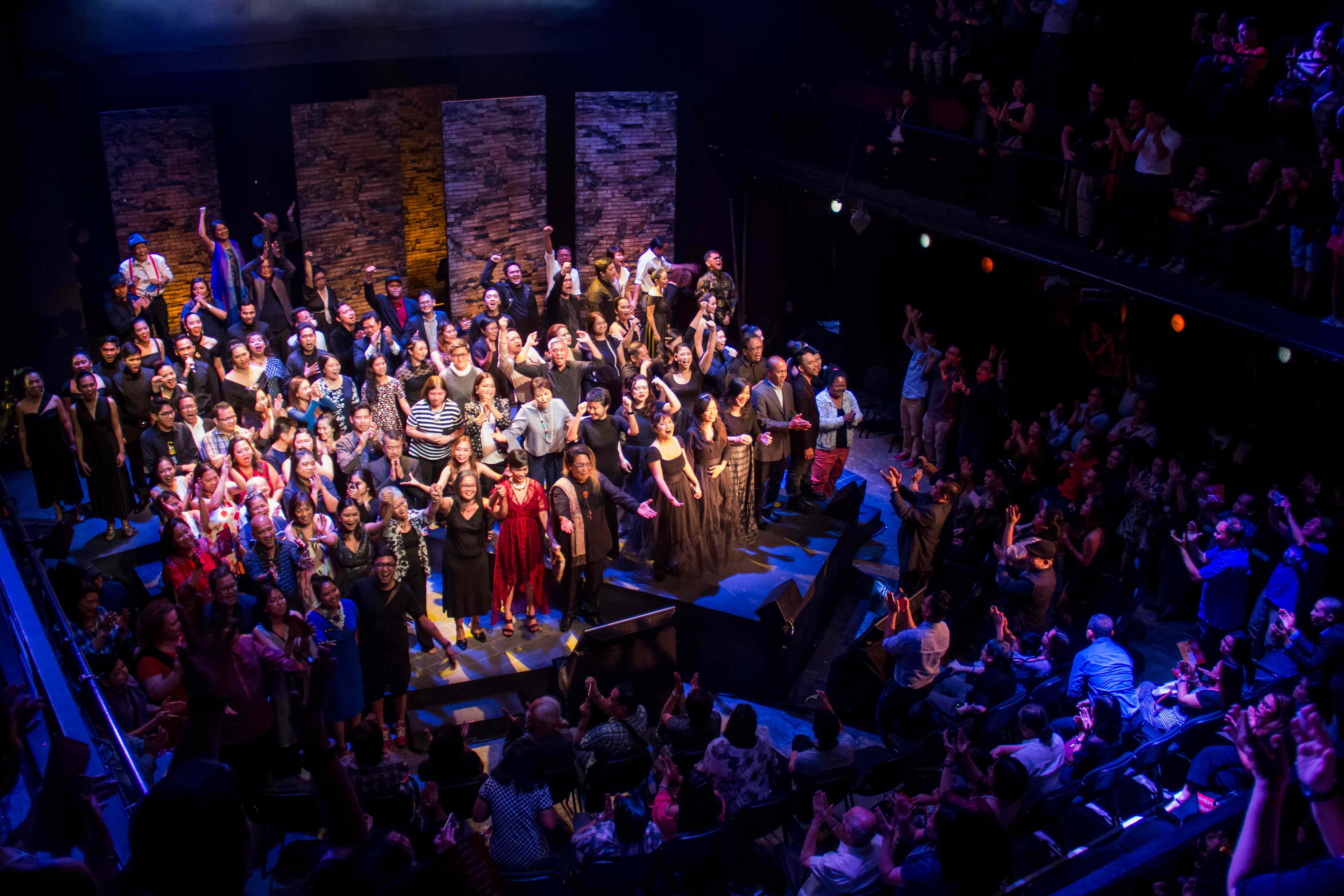 As the last notes of the Philippine Educational Theater Association’s (Peta) “Singkuwenta” concert reached its zenith, almost everybody in the audience was on their feet.

The standing ovation was matched by the enthusiasm of the Peta stalwarts, newbies and veterans alike, who filled the stage. But this was more than just a homecoming or another enthusiastic audience response to a job well done. It was also a homage to a larger vision—the ongoing quest for national self-identity as expressed through 50 years of tenaciously homegrown, grassroots theater.

Peta’s decades-long evolution—from a scrappy militant group that mounted protest plays during martial law, into a nationwide organization that works with different social sectors on how to use theater to contribute to nation building—is a remarkable journey. But the loftiness of it all was self-effacingly downplayed by the ingenious way by which “Singkuwenta” was conceptualized and executed.

From the first time they appeared on stage, the narrators—Soxie Topacio, Mae Paner, Dessa Quesada-Palm, Cris Gonzales, Meann Espinosa and Joel Lamangan—infused the proceedings with Peta’s characteristic wit and native humor. Their narration was not a straightforward retelling of the organization’s founding and growth; it was studded with anecdotes and personal insights about the larger context that framed Peta’s early years.

Peta, founded in 1967, was already present during the First Quarter Storm, and would become a street fixture during the Marcos dictatorship. Its activism was met with batons and water brigades, with some members—Paner, Topacio and Lamangan among them—even paying for their defiance with jail time. The Edsa Revolution would occasion its shift to a more contemporary theater-making, but still grounded on its foundational vision of using the art form for national development.

“The Kundiman Suite,” beautifully sung by Upeng Galang-Fernandez, Michael Odormene and Cynchia and Lionel Guico, wove Peta’s identification with zarzuelas and other “local” theatrical traditions. This was a bold move back in the late ’60s, when the predominant forms of entertainment were English-language dramas and musicals.

Not surprisingly, a huge portion of the first part was spent on Peta’s rise in the martial law period. This was when the group solidified its voice and found its purpose in fighting for a relevant sense of nationalism. While the Peta Choir’s “Padayon Suite” and the hosts’ own “Sectoral Suite” reminded the audience of the price many Filipinos paid in the fight for freedom, it was well-known playwright Rody Vera who brought the house down with his stirring rendition of songs from “Kabesang Tales.”

Dramatic and literary storytelling may be Vera’s greatest gift, but after this performance, one wished he could take a break once in a while and perform in a musical.

In the next few decades following the Edsa Revolution, Peta continued to speak and perform in behalf of those who did not have the means and the voice to express their grievances. But at the same time, it taught these very same sectors—laborers, farmers, students, and communities in far-flung eras—how to organize themselves and articulate their needs through their own grassroots theater efforts. Teaching and community building became part of its core vision.

The “Gender Suite” and “Ethnic Suite” parts of the concert presented more contemporary sounds, dances and songs that celebrated Peta’s role in enhancing the rights of women and tribal minorities, for instance. Two other suites from Peta’s recent musicals also showed the young, modern face it is able to put on tenacious social issues, allowing it to appeal even to millennial audiences.

“The Rak of Aegis Suite” was a testament to hope and indomitability against pressing urban blight, while the sci-fi musical “3 Stars and a Sun” was a look at the future of Filipino democracy, and a rallying cry to the youth of today not to give up the battle so quickly.

That declaration resonated right up to the last song, “Alay ng Lumilikha,” with the ensemble, the narrators, Peta leaders and several generations of its artists crowding the entire stage for a moving, rousing finale.

Peta’s artistry will always be linked to the essential work it has done over the last 50 years of telling the Filipino story. Its golden year is but an affirmation that it will continue to bequeath stirring, powerful theater to a country that sorely needs it. —CONTRIBUTED