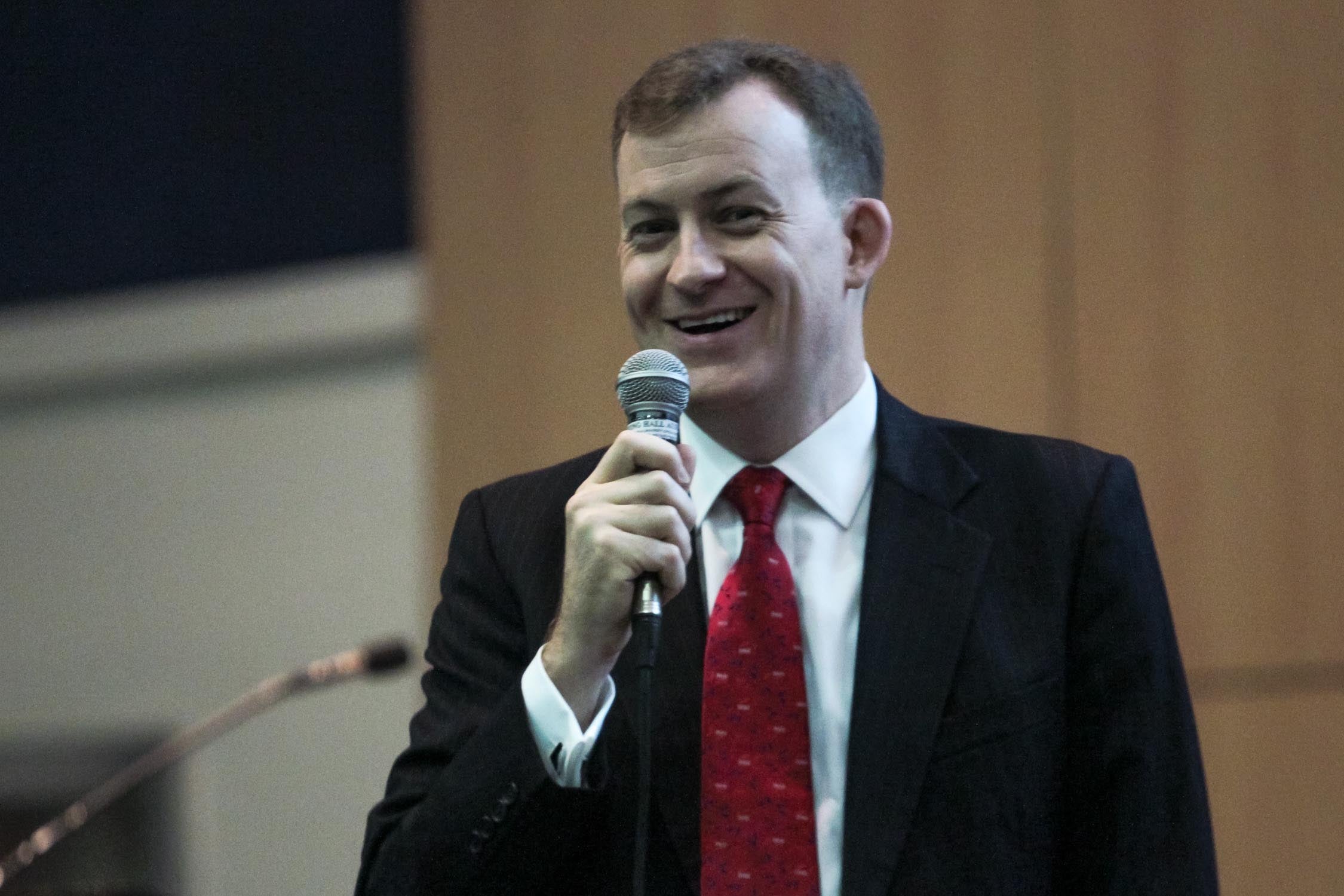 Viral BBC dad in Manila: ‘We didn’t leave the house for three days’

I wished he had brought his kids with him,” said a student in the audience. This is not something one typically hears in a lecture about the state of affairs in Korea, but this was not a typical lecturer.

The setting was a standing-room-only Leong Hall at the Ateneo de Manila University. The visiting speaker was an American named Dr. Robert E. Kelly. If you’ve been on the internet any time since March, he may look a little familiar.

“So I’m famous because of my kids,” he said at the very beginning of his lecture. The students laughed. Everybody knew what he was talking about.

Kelly is an American political analyst based in Busan, South Korea, specializing in international security, with a focus on Northeast Asia, and an associate professor at the Department of Political Science at Pusan National University. He has been on TV countless times as an expert discussing Korean affairs
—but he became known worldwide for something completely unexpected.

On March 10, Kelly was on BBC World News discussing the fallout from the impeachment of President Park Geun-hye. Kelly, clad in a blazer, shirt and tie, was being interviewed via Skype in his home office when the door behind him opened and his children, Marion, 4, and James, then just 8 months old, entered, distracting Kelly.

This was followed by the swift entrance of Kelly’s wife, Kim Jung-a, who hurriedly grabbed the kids and closed the door behind her. Kelly is obviously trying to keep from laughing while apologizing for the disruption. “It’s my fault,” he later explained. “The home office has a door with a lock that I didn’t push.”
The clip went viral, seen by more than a billion people now. Kelly has been dubbed the “viral BBC dad,” and his daughter, Marion, the subject of memes, including several that tell you “how to dress like Marion Kelly.”
The sudden fame shocked Kelly. “We didn’t leave the house for three days,” he explained to media after his lecture. The Kellys received over 1,000 media requests, even as they exiled themselves from social media. Kelly explained that they simply didn’t know how to deal with the media onslaught, which even had reporters tracking down Kelly’s parents back in the United States.

When Kelly decided to talk to the Korean press, 300 reporters showed up. Ellen Degeneres talked up the clip on her show. Outlets as diverse as the New York Times, Us Weekly, CNN and Complex discussed the story behind the clip. It has, inevitably, been parodied. The BBC even called the Kellys “the most famous family in the world” for “24-to-48 hours.”

The aftereffects went beyond 48 hours. Kelly says the biggest change is that “people recognize me in the street.” He is included in an endless stream of selfies. He is asked multiple questions about the conspiracy theories surrounding the clip. Was it staged? Was he wearing pants? “It was not staged,” he said. “Yes, I was wearing pants.”

He is amazed by people’s interest in them. “That’s all it was, a legitimate family blooper. People get really carried away. It’s just ridiculous. I’m genuinely surprised how this got so big.”

How did Kelly wind up lecturing in the Philippines?

The Ateneo’s Korean Studies Program had been established to respond to the growing student and faculty interest in Korea, particularly through lectures since 2012. According to Korean Studies Program director Sarah Domingo Lipura, the program had been looking for someone to talk about the political crisis in Korea after the impeachment of President Park Geun-hye in March. For one reason or another, the invited experts could not make it.

Then Lipura saw the video. “My intention was really for him to talk about the topic, but I took advantage of his popularity. Topics like this wouldn’t really draw this big an audience, but after researching Dr. Kelly’s background, we thought his expertise would really fit this particular lecture,” Lipura said, saying she approached Kelly both for his expertise and his popularity.

So out of the blue, Lipura e-mailed Kelly in April. “I got an answer immediately.” Three weeks later—on May 5—Kelly was in Manila, talking about Korea in a lecture titled “Political crisis in South Korea and Northeast Asia regional security.”

Lipura described Kelly as being very accommodating and noted “his keen interest in visiting the Philippines,” as this was Kelly’s first time in the country.

Wryly funny but also authoritative, Kelly proved to be a natural speaking to the crowd. Without a PowerPoint presentation, Kelly spoke lengthily about the Korean situation, intercontinental ballistic missiles, Kim Jong-un, the role of China and the possibility of nuclear war.

He took the time to explain complicated concepts and earnestly answered the questions put before him.
The gathered students—
over 400 strong—who knew Kelly only from his viral video were clearly engaged by Kelly’s intellect and his humor.

Kelly also spoke about the video and its aftermath with candor and self-deprecation. “Everyone’s here just because of my kids,” he said several times.
Kelly pointed out that, aside from a haircut, he looks exactly like he did in the video. “It’s really weird being a viral sort of personality,” he said.

Perhaps the most unusual product of the world’s fascination with the Kellys is the online animated series “The Adventures of Mina and Jack,” which depict Marion (the narrator and protagonist Mina) and Jack (that’s James), their yoga teacher mom (Jung-a) and über-busy dad (clearly Kelly).
“It’s pretty strange,” Kelly admitted; the Kellys—who are officially creative consultants on the show—have given the cartoon series, produced by Hans House, their blessing.

Marion and James are young enough that they don’t notice how famous they are. “They don’t understand all this,” Kelly said. “I honestly don’t know how we’ll explain it to them when they’re older.”
Marion and James were not with Kelly on this trip—“My son is very young and he’s never traveled outside of Korea”—but that might change.

“Maybe in a few years when my kids are older and if there’s still an invitation, I’d be happy to bring them,” he promised.