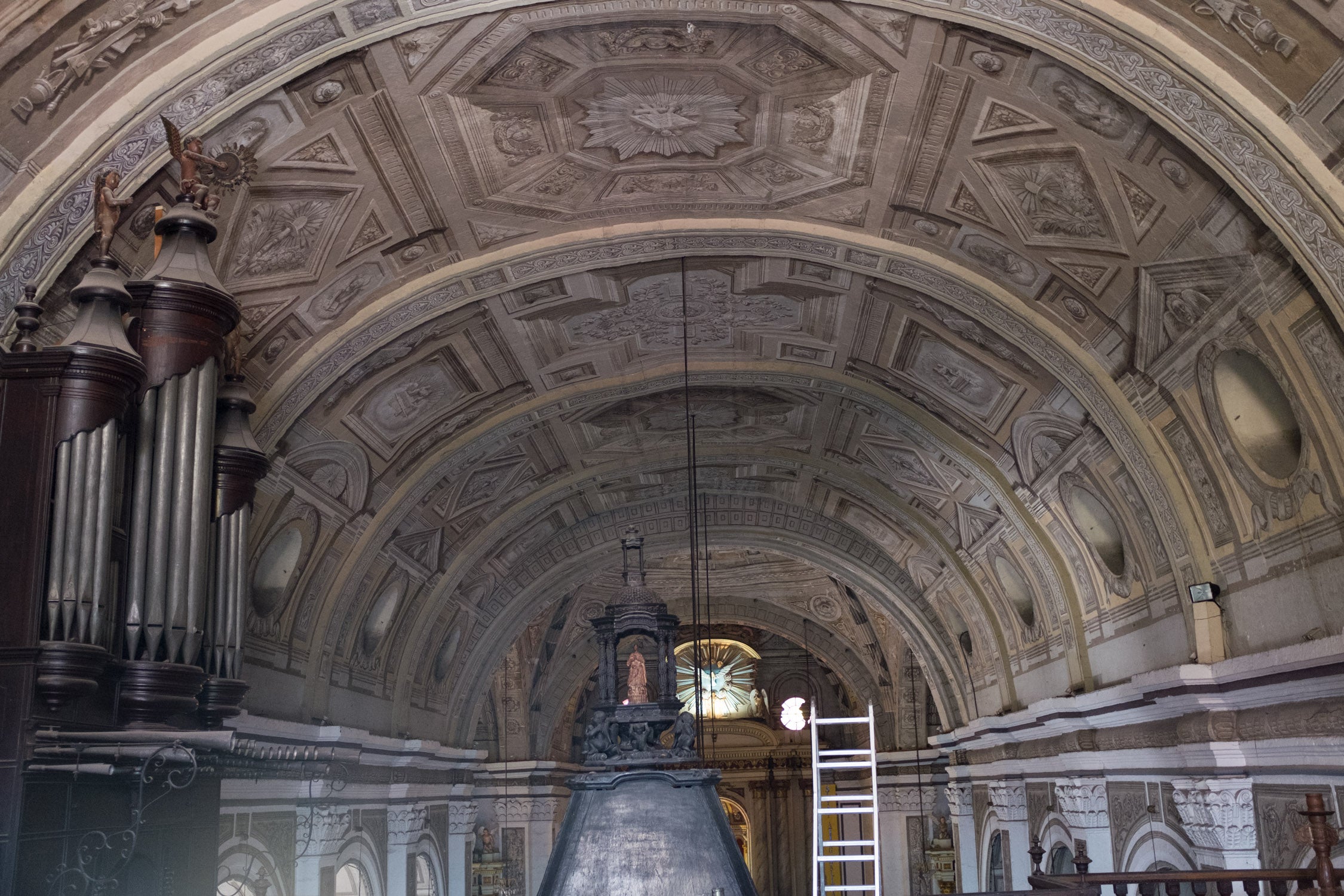 Who knew heritage conservation could be so complicated?
The restoration of the choir loft of the nearly 450-year-old San Agustin Church in Intramuros, one of the treasures of Intramuros, is a case in point.

For the last 29 months, artisans from the Escuela Taller de Filipinas have been engaged in a heroic effort to bring this portion of the church back from the brink. Pitching in is a revolving cast of experts: art restorers, conservators, scientists and architects.

Against all odds—including a severly limited budget—it looks like they’re going to pull it off, and just in time for this year’s Araw ng Maynila on June 24.

“It is difficult, tedious work, but it has been very fulfilling,” says the project manager, historian Dr. Esperanza “Chita” Bunag Gatbonton, whom everyone in the project calls “Mrs. G”.

“I keep telling people, you see the finished product and you marvel,” she says. “But I see the people [who worked on it] and how they progressed from merely doing the work mechanically, to liking their craft and talking about it. I tell them, ‘everything you do has to involve the brain, not just the hands’. It’s very rewarding when you see it.”

Doubly so, since her work plans were initially met with skepticism.

“They told me, ‘this is a heritage church, and you’re going to entrust it to new graduates without any experience?,” she recalls. “It raised a few eyebrows.”

Escuela Taller is essentially a training center where underprivileged youths are trained in carpentry, ironworking and masonry, with a focus on restoring heritage structures. In short, it’s a livelihood project, funded in part by a grant from Agencia Española de Cooperación Internaciónal para Desarollo (AECID), the Spanish government’s foreign aid agency.

Since it was founded in 2009, graduates of the school have worked successfully on many historic structures, including the Malate and Sta. Ana churches.

The San Agustin Church choir loft is its most challenging project so far.

The bulk of the work centers on restoring the ornate silleria de coro, the double rows of 68 intricately-carved high-backed chairs in which the members of the choir were seated, which is nearly as old as the church itself; and the trompe l’oeil ceiling mural which was originally painted in 1876.

Time, the tropical climate and numerous ill-advised efforts at restoration over the decades had not been kind to these historic artifacts.

Termites had attacked the wooden chairs, and over four centuries of alternating dry and rainy season had warped and twisted most of them. At some point in the 1960s, says Gatbonton, they had been painted black in an attempt to termite-proof them.

Meanwhile, the high humidity had caused the adobe stones used to create the loft’s high vaulted ceiling to “sweat”. As a result, the latex paint used in the last attempt to “restore” the ceiling mural started flaking off in ragged patches.

According to Gatbonton, the silleria was said to have been made by carvers from Macau commissioned by Miguel Garcia Serrano, the prior of the Augustinians in Manila, sometime during his term from 1608 to 1614. It was described as being carved from molave wood, with ivory inlays.

In the 1970s, Fray Niceforo Rojo O.S.A. attempted to renovated the choir loft, which had by then fallen into disuse. He stripped off the black paint to reveal that the inlays were not ivory as described in the records, but a white hardwood. Further analysis revealed that most of the chairs were actually carved from narra. Others were carved from yakal, tindalo and other indigenous woods.

This, with the preponderance of Malay as well as Chinese design motifs in the carving, and the lack of documentary proof that the chairs were made in Macau, have led Gatbonton to conclude that the silleria was made by local craftsmen. At the time it was common for the Spanish to employ both Filipino and Chinese workers in building churches.

In any case, the important thing was to restore the chairs. Some of them had been so badly eaten by termites that new members had to be hand-carved from fresh wood.

Amazingly, despite their lack of experience, the Escuela Taller craftsmen rose to the challenge.
“I used to think only Chinese carvers could do this kind of work, but one of my carvers was so talented that he was able to do it without any preliminary drawings, just straight into the wood. He became our lead carver.”
Similarly, the team had no idea how to do wood inlays—the subject had not been covered by their curriculum in Escuela Taller. Gatbonton found a tutorial on wood inlays online, and with some trial-and-error, the artisans eventually learned how to recreate the intricate wood inlays with an inexpensive power saw.

“It came out very well,” she says. “It was amazing. It became our policy that if they wanted to try new skills, they may. Now they can discuss and find solutions on their own, they don’t need to consult the master carpenter. It has become part of the learning experience. There’s a professionalism entering into it. And because this is important work and they’re doing it very well, the management of Escuela Taller allowed me to pay them more.”

To further instill pride in their workmanship, Gatbonton encouraged them to carve their initials on the finished work—in an inconspicuous spot, of course.

The ceiling mural posed a different set of challenges, chief of which was the state of the adobe blocks on which it was painted. The high moisture content had caused the adobe to crumble in some parts, while also causing the paint to flake off.

Controlling humidity was essential if the mural was to be saved. Several experts were consulted to analyze the stones, trace the source of the moisture, formulate an appropriate kind of mortar just so art restoration specialist Guy Custodio would have a stable surface to paint on.

Even with this painstaking prep work, the problem remained: which version of the mural to restore?
The original mural was done by Italian scenographers Giovanni Alderoni and Cesare Debella in 1876, in the trompe l’oeil style that was the craze in Europe at the time, that is to say it was painted to look as if the decorative details had been carved into the stone, and not painted.

But over the decades, various attempts had been made to “restore” the painting. A photograph taken by Niceforo Rojo in 1970 appears to show the mural having been painted over.

Sometime in the 1990s, a certain Ben Cabesada was commissioned to repaint the mural. Unfortunately, the latex paint he used had begun to disintegrate with the high humidity.

“The one made by Alderoni and Debella was monochromatic, but this one had a variety of colors, such as gamboge yellow and cinnabar,” says Gatbonton.

Working with this layer, plus the photographic record made by Rojo, Custodio was able to recreate the mural using the secco technique where the pigments are applied onto dry plaster.

Perhaps the most difficult aspect of any restoration effort is balancing the need to preserve a heritage structure such as the San Agustin Church with the needs of the people who use the structure.

This can be further complicated by the overlapping jurisdictions which often cover such historic structures.
For instance, San Agustin is a Unesco World Heritage Site, a National Historical Landmark under the National Museum, and also falls within the purview of the Intramuros Administration.

But it is also an active place of worship under the adminstration of the Augustinian order, and a favorite venue for high society weddings.

“There’s always a conflict between conservation and use, specially if it’s used for 21st century needs,” says Gatbonton. “The people getting married in San Agustin want air conditioning, but you have to consider the effect of relative humidity and heat and cold on ancient stones and wood. One time they used electric fans with mist. That almost gave me a heart attack!”

It is possible to find a balance between preservation and use, says Gatbonton. In the end, she adds, it is the stakeholders who should have the final say.