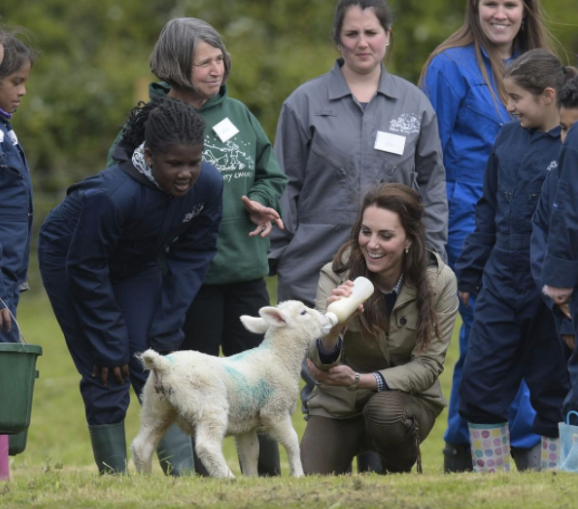 While she may be royalty, Kate Middleton was more than willing to do some farm work as she was snapped enjoying a new furry friend during a visit to a Gloucestershire farm.

The Duchess of Cambridge encountered Stinky, a lamb who seemed to take a liking to her as she fed him milk:

Making new friends on the farm at Farms for City Children in Gloucestershire where pupils from inner city areas get to be farmers for a week. 📷PA

The Duchess helped out with feeding time at the farm and made friends with a lamb named ‘Stinky’ 🐑 pic.twitter.com/j5IHHZR3lI — Kensington Palace (@KensingtonRoyal) May 3, 2017

She also herded pigs along with primary school kids:

At the pig pen The Duchess and pupils from Vauxhall Primary School helped Farmer John from @Wick_Court to herd piglets 🐷 pic.twitter.com/i825CmrpWp

Kate, who is married to Prince William, was doing the rounds at the Farms for City Children, a charity founded in 1976 to give children in urban areas the chance to live and work on a farm for a week. The experience aims to help children in the city appreciate their source of food and to learn about what goes on outside the limited urban jungle.

Last September 2016, she mentioned that she “secretly wants to be a farmer,” according to People Magazine, and is encouraging her children three-year-old Prince George, and two-year-old Princess Charlotte, the ways of the farm in their Norfolk country home. JB