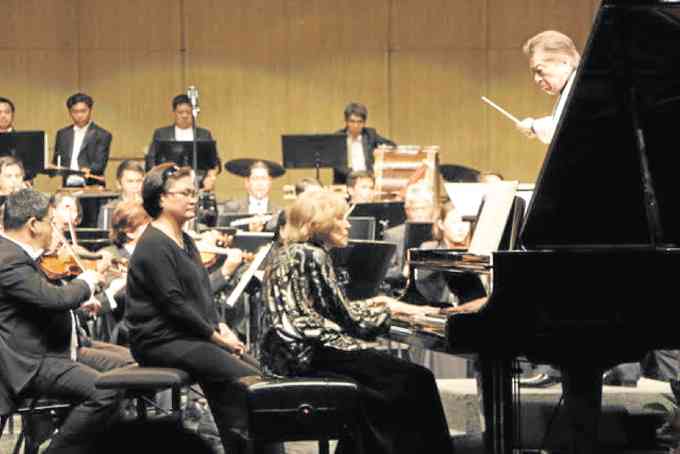 The audience was at once mesmerized by the familiar tunes “Embraceable You” and “I Got Rhythm,” from Gershwin’s musical “Girl Crazy” (with lyrics by his older brother, Ira).

A jazzy ambiance hovered in the hall when PPO played Gershwin’s Concerto in F.

Octogenarian pianist Monique Duphil was at times overpowered by the orchestra, but she nonetheless kept in high rapport with the PPO and kept to the beat. The collaboration was solid.

Duphil played with charm. One could discern a disciplined and sparkling tone. There was agility in her playing and she had commanding presence.

The jazzy lilt expressed in the blues and the ragtime configurations moved the audience to attentive listening. Thunderous applause greeted the collaborative playing of the conductor and the pianist in the end. The pianist acknowledged several curtain calls but refused to give an encore.

An American, Copland visualized Mexico through the dances in an imaginary “salon” or nightclub. He used four published Mexican songs that he read and incorporated them in the work, practically a tone poem, using one of them as refrain (“El Palo Verde”), which the audience was familiar with.

By the time the works of Marquez were played, the audience’s appetite for more Latin beat was already whetted. “Conga del Fuego Nuevo” and “Danzon #2” were inspired by the Afro-Cuban conga.

The first work pulsated with earthy grace, what with its affecting rhythmic drive and melodic lyricism. The trumpet soared affectionately.

“Danzon #2” had the infectious rhythm and beat of the mambo, chacha, and pachanga, all too familiar to be ignored.

On the podium, Fukumura swayed with the music, but keenly led the inspired musicians. His biting familiarity with the music of Marquez obviously owed to his stint as conductor in Latin America, particularly when he was honorary principal guest conductor of the Cuba National Symphony Orchestra in the 1990s.

Fukumura, indeed, knows his métier. He is a dynamic conductor. Truly he has given the PPO an opportunity for “New Beginnings.”