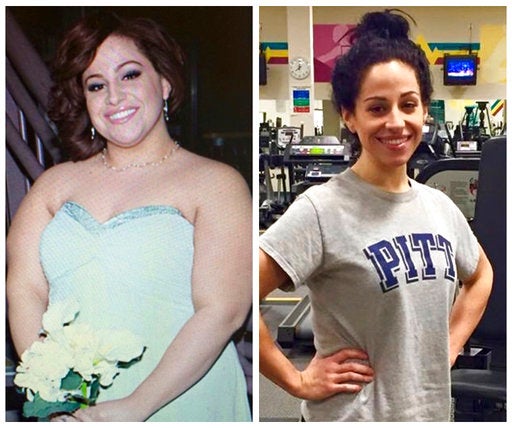 In this combination photo of images provided by Andrea Massella, Massella appears before and after losing significant body weight. While on her weight loss crusade, Massella noticed Ronnie Brower's journey to losing 458 pounds on Facebook and they met over a ping pong and basketball game at the gym. The couple, who lost a combined 578 pounds plan to marry on Saturday, May 13, 2017. (Doreen Massella, left, and Jill Murphy/Mission Fitness via AP)

Couple to wed after losing nearly 600 pounds together

A New York couple is tying the knot after meeting at a gym where they worked out on their way to losing nearly 600 pounds together.

Ronnie Brower weighed 675 pounds and could barely leave his parents’ house four years ago. He was addicted to drugs, alcohol and food. When a doctor told him he’d be dead in two years, Brower decided to get in shape.

With the help of personal trainer Nick Murphy, Brower followed a low-carbohydrate diet, quit the booze and drugs and worked out. In two years he lost 458 pounds.

Andrea Masella was on her way to losing nearly half of her 250 pounds when she met Brower at the gym.

The two are getting married on Saturday, with Murphy serving as the best man.