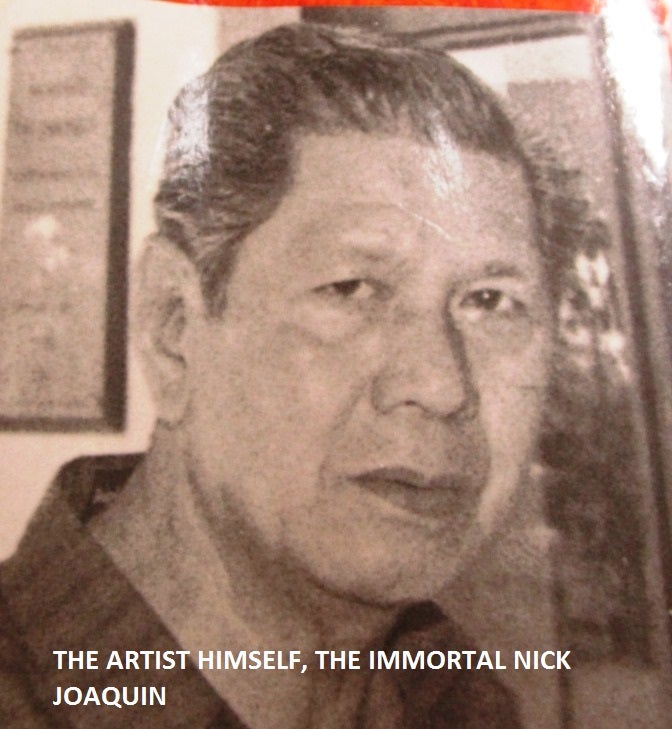 Nick Joaquin’s birth centenary was celebrated last May 4. He passed away on April 29, 2004. He was given the National Artist for Literature Award on March 27, 1976. St. Nicodemus, after whom he was named, has his feast day on Sept. 4.

I first encountered Nick Joaquin as a disembodied voice in the Philippines Free Press, where, fresh out of college, I had been hired for a summer job in 1969. I heard his loud booming voice emerging from his room, not far from the desks of copy readers to where I had been consigned.

Although he had the reputation for being shy (as attested to by Carmen Guerrero-Nakpil and his nephew Tony Joaquin in various reminiscences), Nick’s voice, as loud as a ship’s horn, could fill a room, whether this was a beer hall or, as it happened, the Free Press. Perhaps, this bluster was the cover-up of a person who preferred to be a silent writer rather than a voluble lecturer holding forth in the manner of, say, Mark Twain or American writers on the lecture circuit. I was surprised to meet someone who appeared to me as being still young and energetic (indeed, he was only around 52 at that time) and not, as I had expected, the gray, wizened author of “Portrait of the Artist as Filipino,” “The Woman who had Two Navels” and marvelous poetry and prose quintessentially mirroring our Fil-Hispanic past.

A stereotype heightened by my own exploratory trips to Intramuros and R. Hidalgo in Quiapo had fixed in my mind the image of a hoary and biblical Nicodemus (from which his nickname derived).
Instead, this literary giant was comfortable with the humblest worker in Free Press, as well as his literary peers in the magazine like Teodoro Locsin Sr., Gregorio Brillantes and José “Pete” Lacaba.

This was still the pre-martial law days and one stayed out freely at night (since there was no curfew, imposed only in September 1972) with Nick and his gang in such places in trendy Manila as Indios Bravos or A Grey November in Your Soul. But Nick was also happiest when he was shouting for more beer and appetizers in an ordinary beer garden and applauding the pianist or singer’s renditions of his requested Cole Porter songs.

He must have had a very strong constitution, since he did not seem to have any dietary restrictions and San Miguel beer flowed inside him as if from an unending Fountain of Youth called Pilsen.

I was to meet him over the next decades in such diverse places as the Solidaridad Bookshop in the company of his BFFs Frankie and Tess José, or in the beer garden across Tesoro’s on A. Mabini. I rarely saw him, if ever, in an academic setting. Since he never owned a car, he always came in a taxi and sometimes in the company of his neighbor, Elena Roco, whom people mistook for his wife.

I never saw Nick in any attire that could be described as formal or elegant; indeed, his relatives said he felt most comfortable in everyday wear. When he was given the Magsaysay Award or conferred the National Artist honors, someone must have contrived to clad him, finally, in a de rigueur outfit.

I was to learn later that he had several times refused the National Artist award from the Palace, finally accepting it only on condition that Pete Lacaba, a detainee then, would be freed.

The artist who had written the best paean to the destroyed city of Intramuros in his captivating short stories and immortal play was also someone who had his two feet planted solidly on the ground. He knew his political worth and clout and used it sparingly but effectively.

Having been firmly established as among the best of our writers (if not the best, as many would claim), Nick was to further develop himself as a “literary journalist” and as a writer of biographies. Nothing short of prodigious was his work, which tackled history and culture but also “the language of the streets” and pop culture.

He considered such pop icons as Nora Aunor, Amalia Fuentes and Gloria Diaz just as worthy of his pen as the ilustrados who fueled the Propaganda Movement or the Philippine Revolution. Even though he is critiqued as being too close or too defensive of our Spanish past, he was a nationalist and a Filipino to the core.

He bridged the gap between José Rizal and our European/Spanish heritage and our Anglo-Saxon/American-influenced present. It is telling that his father, Don Leocadio, fought under President Aguinaldo in the Philippine Revolution, and that his mother, Salome Marquez, was a schoolteacher who mastered both Spanish and English. In addition to Filipino, Nick Joaquin was at home in both languages.

To remember and to sing

The young Nick Joaquin, as remembered by his kin, was a bookworm who devoured the collection of the National Library and wore out his shoes visiting the “caverns of Intramuros.” He was so noticed by the friars there that they gave him carte blanche entry to to their libraries and their special sites.

When he visited Intramuros shortly after it was destroyed in February 1945, his nephew, Tony Joaquin, recounted that he sobbed and shook when he saw what was left, and swore: “I shall go away from this place and never come back again.”

From that painful experience would spring his voice pledging to “remember and to sing” as his vocation.

Yet he remained humble, and maintained that, for example, the greatest Filipino writer after José Rizal was José Garcia Villa. It was apparently a mutual admiration society. Villa wrote: “Nick Joaquin is, in my opinion, the only Filipino writer with a real imagination
—that imagination of power and depth and great metaphysical seeing—and which knows how to express itself in great language, who writes poetry, and who reveals behind his writings a genuine first-rate mind.”

A Funereal Effort to Find True Rhymes for Doveglion

Oh, if only we had a hundred Doveglions
Our scions would be tops in NIChood,
Or Neo-Ilustrado Culture-meaning the science
Of what we call the true, the beautiful, the good.
And the hundred tongues would have our tongues all loud in defiance
Of whatever be fraudulent, wicked and crude,
Or whatever would fasten poetry in irons.
But alas in a youth of meanings misunderstood
We had only one such tongue and it was Doveglion’s;
But one voice onward honed, which is Doveglion’s.