For the first time, MVP talks about the love of his life on Mother’s Day | Inquirer Lifestyle ❮ ❯ 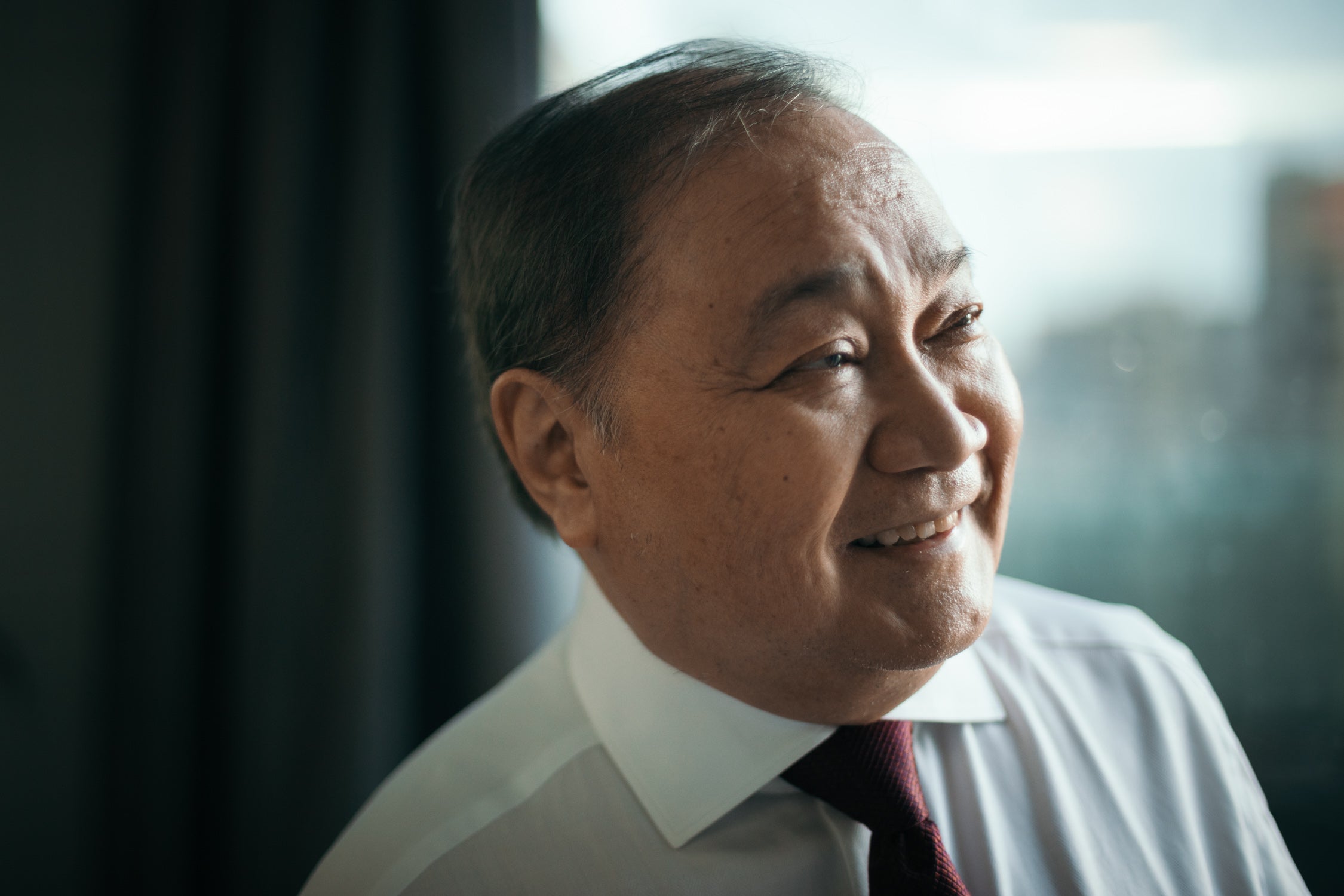 Manny Pangilinan's memories of his strong, indomitable mother are always bright, fresh and funny. She is in his thoughts every day. Photo by Jilson Seckler Tiu

For the first time, MVP talks about the love of his life on Mother’s Day

It turns out that Manny Pangilinan got it from his mother, after all.

His love of sports, that is.

“My mom was sports mad. Absolutely sports crazy!” says Pangilinan one Sunday afternoon at his Metro Pacific office, over glasses of Diet Coke.

“When I was at San Beda, she was a member of the mother’s club, supporting both teams and players,” he recalls. “She’d prepare food for the teams and go to every game. Every single game! I really got my love of sports from her.”

“But she just couldn’t stand the tension,” he continues. “At home, when she’d watch Pete Sampras on TV, if the match was close, she’d slowly get up from her chair in the sala, and make her way behind her bedroom door, still watching! She’d peek in and out, depending on how the game developed.”

Look at any successful man, and you’ll see his mother.

Soledad Perriera Velez was the youngest child of Rosario Perriera, herself the daughter of a Portuguese ship captain and a Filipino mom.

In 2010, Pangilinan produced a well-received movie, “Rosario,” about his maternal grandmother.

The story about his mother, however, has been seldom told, until now.

“My mother was originally named Rosario, after my lola,” reveals Pangilinan. “But when my grandmother’s marriage to Lolo Vicente Velez did not work out and she soon died, my grandfather renamed my mother Soledad, which means ‘solitude’ in Spanish. Lolo Vicente was an indio, but was well-educated, spoke fluent Spanish, and worked at Tabacalera. That’s why my mother spoke Spanish fairly fluently.

“It’s because he admonished her, ‘You’ll never see your mother again. You’ll always be alone.’ Hence, Soledad or Solita.”

Soledad married young to escape an awkward home environment, out from under the thumb of a difficult madrasta (stepmother).

“My Tita Nena, who had married into a wealthy family, had taken my mother under her wing. Soon she was working at Syvel’s, which was an upscale department store then, along Escolta,” Pangilinan recounts.

“She thought he was rich! Dad usually dressed in sharkskin suits, black-and-white saddle shoes, sometimes fedora hats. My dad was such a snappy dresser,” notes Pangilinan.

“But she didn’t know he was only a messenger at Philippine National Bank then! Oh dear,” he chuckles.

“One thing I remember about my childhood is that she worked very hard and never complained,” says Pangilinan. “My dad would give her monthly allowance in cash. And I still remember vividly her sitting at the kitchen table, diligently sorting the modest bills into small piles—one for marketing, one for electricity, and so on.”

As Pangilinan’s dad climbed the corporate ladder in the ’60s and ’70s, Soledad stood steadfast: bright, persevering and strong.

“She was unlike a lot of other middle-class Filipino women of her day. She was very disciplined and modest. I still remember her riding the jeepney to and from the palengke—with bayong filled with fresh vegetables, pork, groceries and live chickens. She cooked excellent Kapampangan food, which she learned from my paternal grandmother. I can still remember her chicharon, which we had for morning merienda.”

He adds: “My mother was very frugal and, in that respect, I somewhat took after her. But I didn’t, in many other ways.”

Pangilinan recalls with a laugh: “After I started First Pacific, moving from being an employee to a business person, she used to ask me where I got my business nose.

“She was a good manager of our household, but business was a different world. So, as I started making my way through, she would ask, from time to time, where I got this interest.”

MVP gave his mother reason to be proud long before First Pacific. “I lived in my parents’ house when I worked in Manila,” he notes. “Partly to save money. I’d spend maybe only five pesos a week on gas. And because I was saving my salary and bonuses, I began making small investments, buying properties on installment… forced earnings, so to speak.”

Pangilinan went on to amass a modest but impressive portfolio for a 20-something professional: 12 lots across Metro Manila.

“I had a lot in Corinthian, another in Tahanan Village, other places I thought were promising,” he says. “I think the value of everything was over a million pesos.”

Settled in Hong Kong where he made his name as one of the Crown Colony’s star (and only Filipino) investment bankers, Pangilinan remembers wonderful work, but a lonely life.

“She would visit me and knew I was alone,” he says. “When I had to undergo an hernia operation, I had planned to have it done at a hospital in Hong Kong. But she insisted I get it done at Makati Med so she could look after me. So I did. Tough to disobey mom, no matter your age.”

He smiles. “Little did she or I think that, decades later, we would end up investing in Makati Med.”

By the late ’80s and ’90s, Pangilinan’s First Pacific was making deals all over the world. But while she supported her son’s decisions, Soledad had a mind of her own.

Pangilinan smiles at the memories. “She had a dominant personality, that’s for sure. But she knew her limits with me. Nonetheless, she would opine once in a while on my business. She would call, say “Hijo (son), maybe that’s not the thing to do.”

Asked if he treated her to tangible signs of his success, he demurs. “After the Aquino assassination in 1983, the economy really went into a tailspin. What also happened then is that real estate prices fell dramatically. My parents were living in New Manila, and I thought of buying them a house in Forbes Park because my Dad had just retired as president of Traders Royal Bank. I just thought they deserved to live in a better neighborhood.

“It cost only around P3 million then, if I recall correctly. But both of my parents said no. My dad didn’t want anyone to think that he made extra money off his position,” Pangilinan says.

“When he died, my mother sold the home in New Manila and bought one for herself, this time in Ayala Alabang. She used her money, not mine, even as she was proud of my successes.”

Pangilinan’s mom was always worried about her son. “She was constantly worried about my health. She would say I worked too hard and that I should rest more. She always reminded me that male members of the Velez clan were susceptible to ailments once they reached the age of 50.”

From his mother and his schools—San Beda and Ateneo—Pangilinan developed a lifelong devotion to the Blessed Mother Mary.

“At San Beda, not only was there a devotion to the Santo Niño, but also to Our Lady of Montserrat. So I kind of grew up with my Marian devotion—in my case, my mother and the Universal Mother. Oh, and Ateneo is, of course, a Marian institution, too.”

Soledad was devout, attending Mass every day. “She wore a white dress with a blue sash,” says
Pangilinan.

His Marian devotion has also extended to a local icon of much veneration, Our Lady of Manaoag. He recalls the precise moment when it happened: “I had spoken in Baguio to Asian Institute of Management students in 1986. Augie Palisoc, now head of Metro Pacific Investment Corporation’s Hospitals Group, told me to drop by Manaoag and meet the Virgin. I did, but really more out of curiosity than anything else.

“Well, let me tell you—instant conversion! From afar, the Lady looked magnificent, and you may believe this or not, but I thought she moved! I was probably just delusional. But I thought she was sending a message—that I should be Her good son. So I’ve been, I hope, Her’s and my mother’s, all these years since.”

Pangilinan’s faith and devotion were evident when Soledad fell ill: “She first had a heart attack in New Jersey, in 1992, when she was 61 years old. Since my father owned an apartment in Burlingame, California, she had open-heart surgery in a hospital in Mountain View. Later, she developed ovarian cancer and I ensured she had the best treatment available, Memorial Sloan-Kettering in Manhattan. Then Stanford. Finally, back to Makati Med. She died in 2002.”

He recalls the painful memory: “Her cancer had metastasized to the point of no return. My sister and I were told to whisper in her ear in her last moments. I saw her suffer incredibly but stoically, which was extremely hard to experience. But eventually she became resigned and peaceful, and passed on.”

Fifteen years after the indomitable Soledad died, still not a day goes by that Pangilinan doesn’t remember
his mom.

“She had such an ebullient personality, and was a big factor in my life, my outlook, my values,” he says. “So outgoing, very gregarious. Much more than my father or I.”

He adds: “She was also supremely honest, especially in terms of financial dealings. I like to think I inherited that from her.

“My utmost regret—and I know it’s not wise to have regrets, but I have just one—is not having spent as much time with her as I could have, especially as I got older, a regret that is not exceptional, but nonetheless painful
in retrospect.”

He becomes quiet, looks away for
a moment.

And in a split second, Pangilinan recovers and smiles, broadly. “I mean, I really wish she were here, to see the Gilas (Philippine national basketball team) play! And the PBA (Philippine Basketball Association) teams we have and, of course, our college teams from San Beda and Ateneo.”

She’d probably be at every single game, just like you, I venture.

“I’m sure she would,” says Pangilinan, matter-of-factly. “I know she would.” —CONTRIBUTED