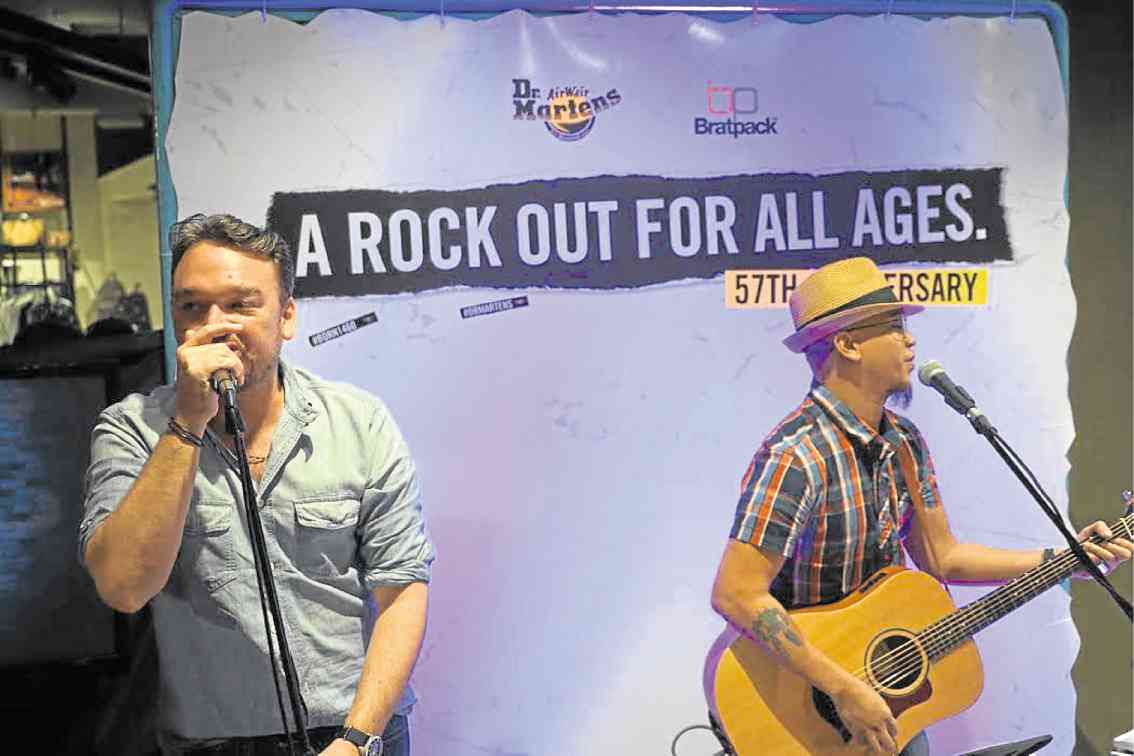 Still kicking it at 57

What was your granny doing at 57? Or better yet, what do you think will you be doing when you turn 57? Throwing gigs and parties for your favorite people, donning every shade, pattern and print that you want? Maybe, maybe not. Take your cue from Dr. Martens, which celebrated its 57th birthday in the most laid back yet memorable way possible—with good food, great music and in the company of loyal friends.

Bratpack in Greenbelt 5 was transformed into a mini-party venue where guests enjoyed overflowing pizza and booze, as well as stripped down, acoustic tunes courtesy of Basti Artadi and guitarist Marco de Leon for the “A Rock For All Ages” event. It was Basti’s first gig after his surgery in January, and the crowd is pleased to hear him sing a repertoire of songs that included The Beatles’ “Come Together,” “Señora,” from Basti’s solo album and Wolfgang’s groundbreaking single, “Halik ni Hudas.”

Dr. Martens shoes in the Philippines in the 1990s was a rare novelty that we could access only through select footwear and px goods shops in the metro or if we have it purchased abroad. Back then, the most popular models were the black 1460, as well as the black 1461 and Polley, which were used by some high school coeds as part of their uniform. Some local brands even tried to copy the look of the insanely popular Dr. Martens shoes.

Forward to two decades later—Dr. Martens is way cooler and even more popular than ever. Aside from the addition of today’s young generation to Dr. Martens’ legion of global fans, the brand is treasured by the same people who cherished it in their restless youth.

Primer Group of Companies’ brand executive, Alexis Lizares, recognizes this, and knows who the true supporters of Dr. Martens are.

“Definitely the core customers would be the people who grew up with the brand, as you mentioned in the 1990s. Back then they saw Dr. Martens as something aspirational. So maybe back then they weren’t working yet and they thought ‘hey these are great shoes, I want to own them,’ but maybe back then they couldn’t buy it yet. So maybe now that they’re starting to work or already have work, deciding for their own selves, Dr. Martens is something that they can all have and something they’re really proud to own.”
Dr. Martens has established a stronger presence locally and is now available in several Dr. Martens concept stores
and over 20 other retail shops locally.

Wearing a pair of Dr. Martens isn’t just one of the coolest counter-culture fashion statements you can ever make; it’s also a wise investment. Your Airwair boots with Bouncing Soles were originally meant as heavy duty workwear, so you can expect that a pair will last in your shoe closet for many years.

Even in the ’90s, then Wolfang vocalist Basti Artadi was not indifferent to Dr. Martens’ rugged appeal and durability.

He recalls, “I bought my first pair in 1992. I wore it all the way through the first, second, third and fourth [Wolfgang] Nalbum, all the way until I moved to the States. So that’s ’92 to 2001. In the States I still wore them, and it got to the point where the leather starts cracking. I had brown ones, brown 8-ties, but I still wore them ‘cause they were still so put together and I actually liked it that it looked that way.”

Quite a handful of artists have been seen donning a pair of Doc Martens through the years. The long list of rock stars includes The Who’s Pete Townshend, The Clash’s Joe Strummer, Nirvana’s Kurt Cobain, British rock band Blur, and Tim Armstrong of punk act Rancid, among others. More recently, celebrities like Robert Pattinson, Britney Spears, Ellie Goulding, Jessie J and Gigi Hadid have been sighted sporting a pair.

Dr. Martens has a huge following in the Philippines, and its birthday party wouldn’t be complete without its loyal fans. One of them is Ian “JJ” Flores,” who has bought about 20 pairs of Docs so far. His favorite pair of all is the 1460 Black Smooth, Made in England, predated 1997.

JJ bought his first pair as soon as he got his first Christmas pay check way back in 1996.

Dr. Martens has expanded not only in terms of market reach but more importantly, in its selection of durable yet fashionable footwear. The collection now includes a wide variety of boots, low-cut shoes and even sandals, in numerous colors, shades and prints and patterns. You can opt for your basic black 1460s, nurture your Adventure Time fixation with Princess Bubblegum boots or relive your ’90s couch potato sessions with a Beavis Butt-Head pair.