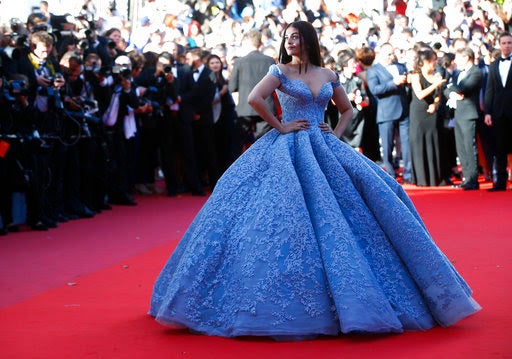 Model Aishwarya Rai poses for photographers upon arrival at the screening of the film Okja at the 70th international film festival, Cannes, southern France, Friday, May 19, 2017. (AP Photo/Alastair Grant)

Bollywood actress Aishwarya Rai strutted on the red carpet of the 70th Cannes Film Festival in France clad in a Michael Cinco couture on Friday.

Rai, who wore a dazzling blue gown designed by the Dubai-based Filipino designer, was in the event for the screening of her film “Okja.” All that was missing were a glass shoe and her Prince Charming.

Cinco expressed pride in dressing Rai, a Miss World 1994 titleholder, with his creation from his Impalpable Dream of Versailles Collection.”The super gorgeous Aishwarya Rai looks like a fairy-tale princess in a couture Impalpable Land at the red carpet at the opening of Cannes Film Festival,” he captioned his Instagram post.

Cinco, who has earned global prestige for his glimmering designs, is patronized by international celebrities such as Lady Gaga, Jennifer Lopez, Britney Spears, Sofia Vergara, Mariah Carey and Kylie Minogue.