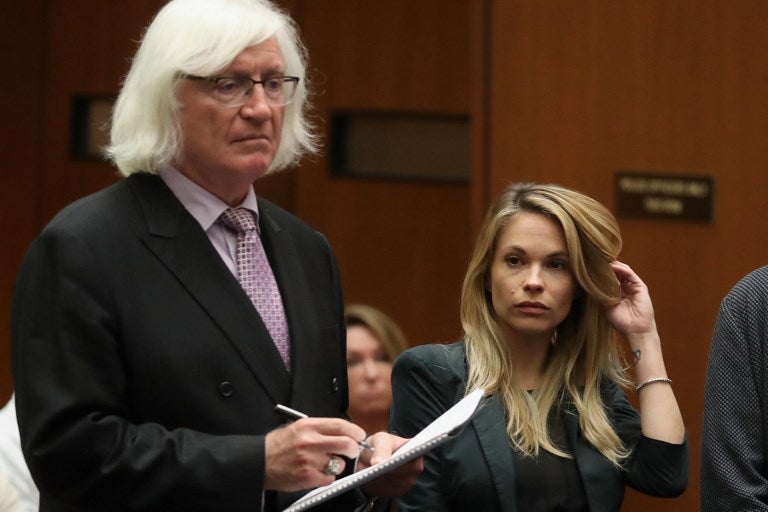 LOS ANGELES, CA - MAY 24: Attorney Thomas Mesereau (L) speaks during a hearing for model Dani Mathers at Clara Shortridge Foltz Criminal Justice Center on May 24, 2017 in Los Angeles, California. Mathers is facing invasion of privacy charges for taking a picture of a 70-year-old woman in an LA area gym locker room and posting it online along with disparaging remarks. Frederick M. Brown/Getty Images/AFP

LOS ANGELES, United States — A Playboy model who secretly took a picture of a naked 70-year-old woman at a gym and posted it on social media with a snide remark was placed on three years’ probation on Wednesday.

Dani Mathers, the magazine’s 2015 Playmate of the Year, was also ordered to perform 30 hours of community work as part of a plea deal.

The 30-year-old drew a storm of criticism after she posted the picture on Snapchat in July of last year.

The photo showed the naked woman from behind at a Los Angeles area fitness center with a mocking caption that read: “If I can’t unsee this then you can’t either.”

Mathers was banned from LA Fitness gyms following the incident, which prompted a public outcry and raised questions about body shaming, especially on social media.

She apologized for her action after posting the picture, saying in a tweet: “I’m sorry for what I did. I need to take some time to myself now to reflect on why I did this horrible thing.”

She said she had meant to send the image in a private message but shared it publicly instead. CBB