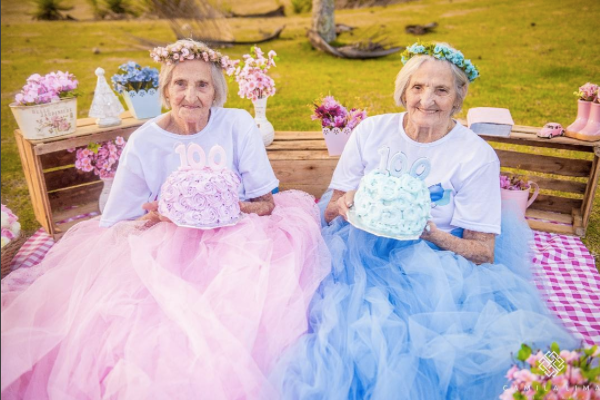 Twins Maria and Paulina have spent a whole century together. Image: Instagram/@fotografiacamilalima

Twins in Brazil celebrating their hundredth birthday were treated to a shoot by a photographer after she found out about them in a local news report.

To take their pictures, Brazilian photographer Camila Lima personally contacted the families of Maria Pignaton Pontin and Paulina Pignaton Pandolfi, and even did their make-up.

Lima is a wedding photographer who thought the twosome were “so cute,” she told Buzzfeed News.

There’s also a heartwarming video of the centenarian twins, who gamely posed for photos:

Lima has been photographing senior couples for more than year, saying that they inspire younger couples. The sisters were reported to have been “very happy” with the pictures. Niña V. Guno/JB

97-year-old twins leave world as they entered it: together