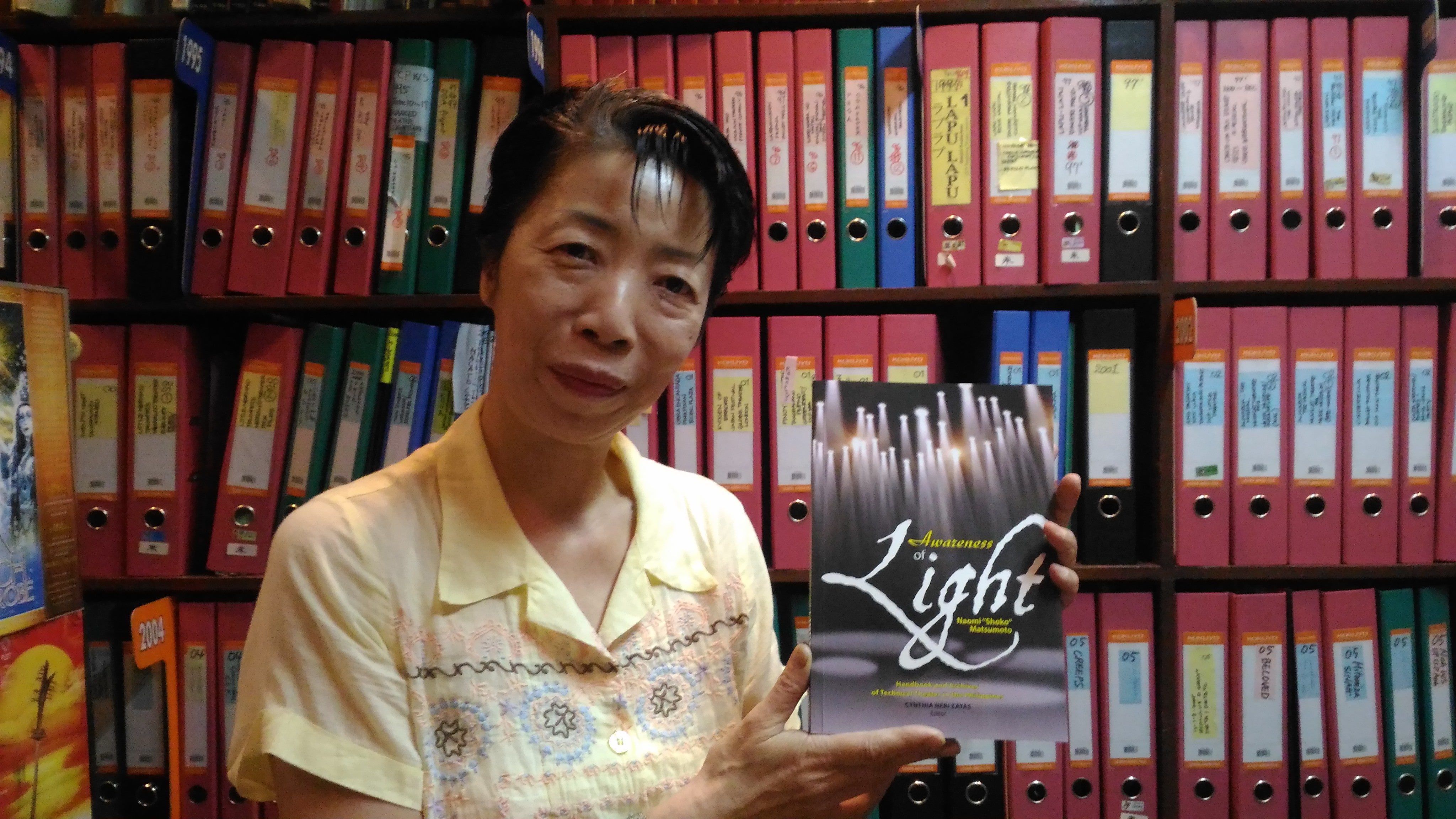 Even in a room named after her on the first floor of Benton Hall at University of the Philippines Center for International Studies (UP-CIS) in Diliman, international lighting designer and sensei of technical theater Naomi “Shoko” Matsumoto is as conscious of proper lighting when posing for a photo.

“Sorry, [where I am seated has] bad lighting,” she says, laughing, while adjusting her position and holding a copy of the recently launched book “Awareness of Light: Handbook and Archives of Technical Theater in the Philippines.”

The book is published by the UP Press in cooperation with UP-CIS Publications and the Sinag Arts Foundation.

For the past couple of years, the air-conditioned Naomi “Shoko” Matsumoto Technical Theater Library and Archives has been housing her lifelong collection of books, catalogs, scripts and journals totaling, as of last count, some 292 volumes.

The idea started when her house-studio in San Juan City was flooded. Sinag Arts Studio in Mandaluyong City, then the country’s one and only technical training center of which Matsumoto was a founding member, was destroyed by Typhoon “Ondoy.”

“I threw away 30 percent of my things. Some were kept in boxes for two years and they had molds. I had nowhere to transfer what’s left. So sad,” Matsumoto says.

Professor Cynthia Neri Zayas, a longtime friend and director of UP-CIS, volunteered to house them in a room at Benton Hall, and that led to the Matsumoto Library and Archives—a place where theater majors, especially those into lighting design, can study her work over the past four decades.

Matsumoto keeps a detailed record of every production she’s in. “It’s the Japanese DNA of organizing things,” she says, showing one of her diaries and a page from a sheaf of handwritten notes dated July 1997. Written in red was “Rolando Tinio,” dated July 7. “It was when he collapsed and died, just a few days before we opened ‘Ang Larawan, the Musical,’ his last work,” she recalls.

Another story goes that when set and costume designer Gino Gonzales was doing research on the works of his mentor, the late National Artist for Theater Design Salvador Bernal, for a tribute at the Cultural Center of the Philippines, Gonzales visited Matsumoto’s collection, then housed at a library in her San Juan City residence. Because of Matsumoto’s notes, Gonzales was able to replicate an exact set model of a Bernal work.

Matsumoto’s lighting resumé spans plays, operas, ballets and fashion shows, from the early ’80s up to the present. Individual files of them are kept in the library; among the notable ones: Tanghalang Pilipino’s “Aguinaldo: The Musical,” 1998; Ballet Philippines’ “La Revolucion Filipina,” 1996; Repertory Philippines’ “Beauty and the Beast,” 2002; Dulaang UP’s “Kabuki Kajincho,” 2002; TP’s “Zsa Zsa Zaturnnah Ze Muzical,” 2006; Atlantis Productions’ “Hairspray,” 2008 and “Next To Normal,” 2011; even “Understatement: The Bench Denim and Underwear Fashion Show,” 2004.

Accounted for are about 359 productions of the 500 (and counting) that Matsumoto has done since she arrived in the Philippines in the early 1980s, including her projects in countries like Singapore, Malaysia, Taiwan, United Kingdom and the United States.

“Awareness of Light” serves as a vital resource not only for students but also for lovers of theater and the performing arts. The book is Matsumoto’s mind and experiences compressed into 228 pages, or an equivalent of what one may learn in a semester of courses in technical theater, contemporary theater history and more.

“When the curtain rises, the first three minutes is important. The audience must immediately be drawn in,” she writes. Another reminder: “When you watch an opera of 100 performers onstage, remember that there are 200 more working backstage.”

Nowadays, Matsumoto is taking fewer projects in theater to focus more on lighting parks, convention centers and museums here and abroad. In Taiwan, she’s part of an ongoing project to transform an old sugar factory into a cultural park.

The most recent theater production she did was the re-staging of Tinio’s “Makbet” for De La Salle University’s College of Saint Benilde in March this year, directed by Padilla. “I said I already stopped (doing) theater but I cannot say no to Nonon,” she says.

“It was the students who actually executed the lighting. I only did the concept,” she adds. “But with a good director and a good story, maybe I’d go back to theater.”

She’s also open to touring schools and conducting workshops nationwide. “I’d like to share my knowledge and experiences with the young, because they’re the ones who will take over.” —CONTRIBUTED