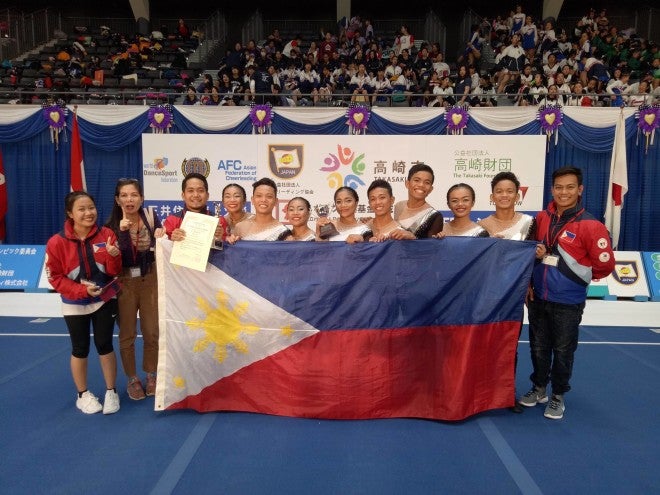 Team Iriga Magdancers from Camarines Sur represented the Philippines and won first place in the Cheerdance category at the 11th Cheerleading Asia International Open Championship held May 13 and 14 at Takasaki Arena in Japan. The team also won gold and bronze in the Cheer Dance Duo category.

Ten teams from Asian countries showcased their talents, skills and coordination—
dancing as one, with pom-poms as props.

Team Iriga head coach Rodrigo Salando Jr. said that people were amazed that there were cheerdancers this good from the province, adding that the team members were motivated enough to win.

The Cheerdance category consisted of eight members in a three-minute production, while Teams Gold and Blue, which performed in the doubles category, each performed a two-minute routine.

Dannielle Sasaluya, captain of Team Iriga Magdancers, also participated in the doubles category, which she found more difficult. Mistakes are more noticeable when you’re dancing as a pair, she said.

But she was glad to see her cheerdance teammates egging her on, inspiring her to do her best.

The presence of Iriga City Mayor Madelaine Yorobe Alfelor gave her more confidence. Apparently, the mayor is also fond of dancing, so she was very hands-on with the team, which motivated the members to excel even more.

The team consisted of eight male and female Filipino cheerleaders with ages from 16-18, who strutted, spun around and grooved to the music.

The same team competed at the Batang Pinoy Cheer Dance Competition and the Philippine National Games, where it qualified to represent the country in the 11th Cheerleading Asia International Open Championship.

The Team Iriga Magdancers will also represent the country at the coming Cheerleading World Championship in November.

Saldano said he considers the Magdancers as an all-around team, which allowed it to stand out from the rest of the competition.

Both male and female team members were flexible, Salando pointed out.

The team’s choreography was a combination of dance and difficult routines such as jumps, turns and leaps. “Thankfully, we were able to do it beautifully and with hardly any flaws,” said Sasaluya.

This is only the second time Team Iriga represented the country in an international competition. The first was three years ago at the same competition, but Salando clarified that the stint was different back then.

Culture shock
It was a culture shock for them, Salando recalled. All the while he thought his team was good enough, only to find out that the members had a lot of catching up to do compared to their foreign counterparts.

So he led a rigorous training program for the team to be in tiptop shape. He revealed that the team went through a lot of challenges and struggles, which is why its members were in tears after being declared champions, and in two categories at that.

Salando said that the team will work twice as hard, as he polishes members’ skills in preparation for the coming competitions.

He also invited aspiring cheerdancers—with or without experience—to join free workshops with the team.

Most of those who train with Salando are scholars in Iriga.

Sasaluya’s message for those who want to become cheerleaders is to give their best notwithstanding obstacles. She quoted Salando’s words that nobody becomes a good cheerleader and cheerdancer without working hard for it. “If you really want to dance,” she ended, “go for it. Just go, go, go!” —CONTRIBUTED