How we got Djokovic to do our video selfie | Inquirer Lifestyle ❮ ❯ 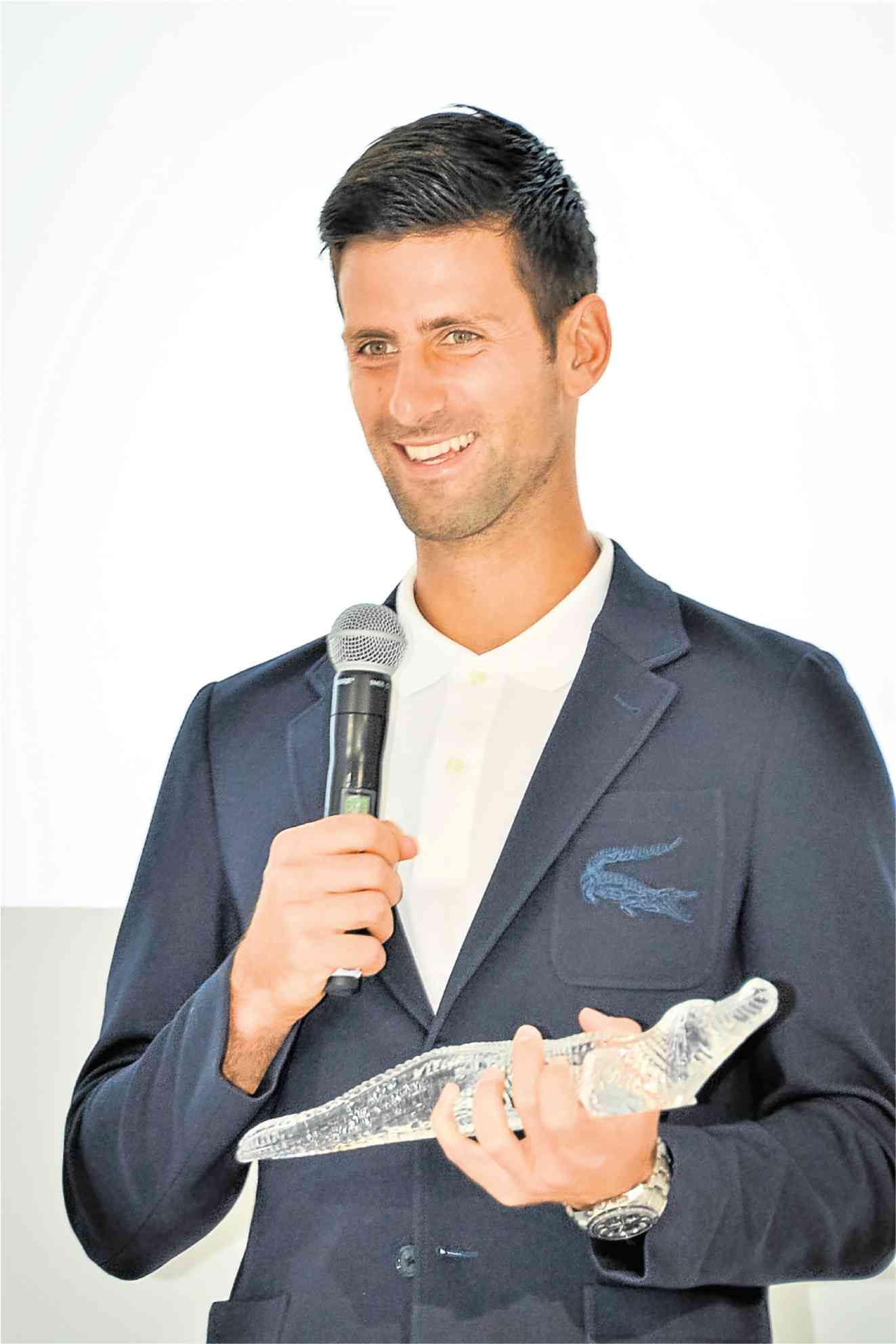 Djokovic is presented with a crystal Lacoste crocodile at Monte Carlo Country Club.

How we got Djokovic to do our video selfie

We flew home from Monte Carlo last Thursday still flush from our video selfie with Novak Djokovic, but with a whirl of questions on our mind. Like: why is my child’s generation being made to experience martial law, like my generation did? How did we go from being Asia’s Rising Tiger to terrorist zone? Who are really behind Maute, what is the composition of this nebulous instant player?

While there might be a collective feeling of being under siege, our arrival wasn’t bad—no long immigration queue; the airport, while not world-class, was all right. And we felt gratified to learn that a global premium brand like Lacoste, which has just presented Djokovic as its brand ambassador, considers the Philippine market not only dynamic, but also strategic to its Southeast Asian business. Lacoste’s primary markets are the US, Europe (France, of course), and in Southeast Asia, Thailand and the Philippines. Lacoste is distributed exclusively in the Philippines by Stores Specialists Inc.

Indeed, these are days when one wants to straddle the good and the bad news; we need the good news like an oasis in the desert.

I was still relishing my surprise face time with the 12-time Grand Slam champion and the world’s second highest-ranked tennis player. I didn’t expect Djokovic to work my phone for my selfie. (See Inquirer Lifestyle, May 24, 2017, page C1)

Last Monday morning, the press con day, the feeling of anticipation was very palpable among the sports and fashion journalists flown in by Lacoste from all over the world to Monte Carlo in Monaco, for the great reveal of the brand’s newest ambassador. Although tennis websites had been speculating that it would be Djokovic, Lacoste was tight-lipped about its choice.

Two huge buses unloaded the media at the Monte Carlo Country Club, the site of the prestigious Monte Carlo Masters. On the way to the function room where the press con would be held, one looked over the beautiful and vast clay courts where tennis gladiators fight it out once a year.

Welcoming the media, Lacoste CEO Thierry Guibert spoke about how Lacoste is celebrating its 85th year in 2018, the brand that was started by French tennis champion Rene Lacoste in 1933. Guibert spoke about how, more than ever, the brand celebrates the values of tenacity, fair play, honesty and humility. And, Guibert added, Lacoste and its new endorser shared these values.

Guibert said, “I waited for this day.”

Then he introduced the “New Croc”—Novak Djokovic. In white Lacoste shirt and pants, the reigning French Open champion strode in casually but with that celebrity aura, took his seat onstage and spoke away. He was turning 30 that day.

Djokovic or “Nole,” as he is endearingly called by fans from all over, is easily one of the most articulate tennis champions. He doesn’t want for words. For about an hour, he answered questions about the brand and its styles, his game, his new coach Andre Agassi and, of course, his values.

Another surprise came after the press con, when the media was ushered outside, to the scenic veranda overlooking the tennis courts. There, unfurled on two clay courts, was the much-bigger-than-life image of Djokovic, his arm swung to a fierce backhand, those thigh muscles carved for action.

Djokovic and Guibert stood at the veranda for the photo op. I inched my way to the phalanx of photographers snapping away until I was just a foot away from the two. A Korean woman was shouting out from the gaggle of reporters behind me, then a Turk.

“I love these languages,” Djokovic said, who’s fluent in English, French, Italian, German and his native Serbian. “I love languages. Listen to that.”

Sensing how he was in a conversant mood, I told him, “Philippines!”

He looked at me, moved closer until we were face to face, and said, “Oh Philippines, I was supposed to go there with Nadal, but it didn’t push through. What happened there?”

He said, “Perhaps next time.”

I couldn’t believe I was small-talking with the New Croc.

He said, sure, then seeing how my fingers were fumbling, he got my phone, and said, “Let’s do a video.”

Incredulous, I said, a selfie for my tennis mates. “A video for the Philippines,” he said.

Before I knew it, he was holding my phone to our faces, greeting the Philippines, asking me, what’s hello? I could only squeak, “Mabuhay” (how do beauty contestants know that template so well?). Then he said, what’s I love you, which he clearly wanted directed at Filipinos. The inept translator that I was could only say, “Mahal kita!”

And that was that—“Mahal kita, Philippines!”

The thrill of the moment became even greater later when I realized I was the only one that morning who wangled a video greeting from the man of the hour.

Andy Murray, President Obama, now Djoko—yes, breaking celebrity protocol is getting to be my most enjoyable sport, after tennis.

Djokovic has media savvy, obviously, and can be a crowd pleaser, if he wants to. On the court, the crowd can be either on his side or against him, especially when he’s playing Roger Federer. That is Djoko—he draws strong reaction from tennisdom, you’re either for him or against him. He’s never for bland reactions.

He can fuel the intensity of the sport, draw out the passion of its audience.

After he introduced recently a fitness and health regimen that saw him lose weight and display near-preternatural agility on the court, he became unbeatable and became one of only three men to hold the four grand slam titles at one time.

But to me, what makes Djokovic special is, just as the Lacoste CEO said, tenacity—how he could slug it out to match point, even if the crowd was against him. Because at the end of day, tennis is mental toughness. These gladiators have all that it takes to reach grand slam level, but what tilts the scale is the mind.

Djokovic admitted as much during the press con. “I work every day not to have fear,” Djokovic said. “I want (my game) to be just pure inspiration, love, excitement.”

He said how it’s not been easy the past months. He decried a “lack of balance on the court,” but how after winning Roland Garros last year, he discovered a “new feeling, motivation of playing.”

Lacoste, he said, brought on a special feeling because it is a French brand, and thus the French Open (to start tonight, Sunday, Manila time) will be his home court.

Referring to the brand and its founder, Rene Lacoste, he said he’s proud to be the New Crocodile—“It’s quite amazing for me to be related to its legacy.”

“Rene has represented all these values… It’s not easy, we face challenges, egos, but it’s a beautiful world and we grow with them…”

Asked what similarities there could be between him and Rene Lacoste, he said, “The wall, where he started to train. I also started with one of those walls in Serbia.” He was referring to how players hit the ball against the wall to learn, strengthen and polish their strokes.

He recalled how he grew up seeing his mom and dad wearing Lacoste and how he’d look into his dad’s closet for the Lacoste shirt.

Asked his preferred color on the court, he said, “Camouflage is the best… pick the color closest to that of the court, to be compact… tennis is a quick sport…”

He said that being the New Crocodile brought a “lot of responsibility… represents the values. It’s not only fashion.”

On his new coach Agassi—an announcement that stirred the tennis world—he said he could identify a lot with Agassi: “He’s a great returner, has faced a lot of challenges. He went through what I’m going through now. His resilience, his strength, I can relate to a lot.”

He said he’s been communicating with the tennis icon. “We’ll see how the relationship is on court, off court.” He can’t talk beyond the French Open where that partnership is concerned.

He put gluten-free diet on the global fitness map and, now, he said, he’s also cut out dairy products and refined sugar. Djokovic is leaner in person than on TV, his ultra-trim body perfect for the slim-fit Lacoste blazer.

Now a father, and with another child coming—his pregnant wife Jelena showed up after the press con, looking beautiful in a summery outfit—he said that to be a father “is the biggest gift from heaven. My life as a tennis player has changed… I’m entering a new dimension (of) consciousness… At home I set the racket aside.”

He’s looking forward to the day he can have “my son in my box… To seek balance is the biggest task, how to give the most of yourself and be happy in your work and family. Family support means a lot to me.”

It helped that the press con was held in Monte Carlo, in the French Riviera, which he loves and where it is said he has a home.

He also spoke about his foundation that helps the children of Serbia, in their preschool education.

Yes, we had quite a day in Monte Carlo last week.