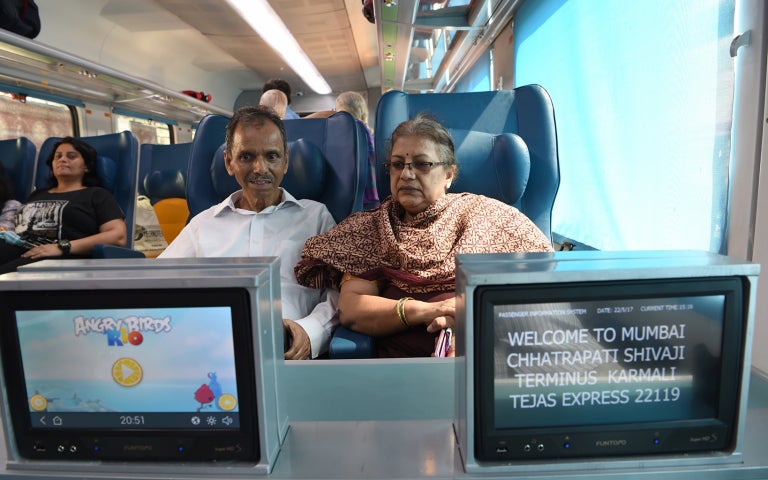 All aboard India’s new ‘luxury-affordable’ train

India’s passenger trains are notorious for being rickety and spartan, but the government is hoping to change all that with a new “luxury” service.

The popular image of rail travel in the country of 1.2 billion people is of hundreds of people crammed into carriages, perching on roofs and hanging off the sides. But with its reclining seats and “in-rail” entertainment featuring Bollywood movies, the Tejas Express may be getting the country on a different track.

Of course it is a far cry from the luxury train recently unveiled in Japan, complete with Michelin-starred chefs, solid cypress bathtubs and a cosy snug with roaring fire. But by Indian standards the new service, which also boasts wifi, a selection of games and audio channels and allows passengers to press a button to call attendants, is a hit.

“It is like what airlines offer,” said Adarsh Parsekar, who was on the inaugural journey on Monday.

Gone are the ubiquitous tea sellers and samosa vendors who sell snacks to hungry travellers through the open windows of regular trains during platform stops. In their place are vending machines offering coffee and a catering trolley that passes through the aisles of the cool, air-conditioned carriages, whose windows are sealed tightly shut. The doors are automatic and centrally controlled rather than manually operated and each coach is equipped with CCTV cameras.

Railway officials are billing the service, which runs between Mumbai and the tourist state of Goa, as India’s first luxury, yet affordable train.

That is around 20 percent more than a regular train on the same route, depending on when tickets are bought, but cheaper than the average flight. The Tejas Express takes eight and half hours to reach Goa, only marginally quicker than regular services. It is capable of reaching speeds of 200 kilometers per hour (124 miles per hour) but rarely will due to speed restrictions on the line.

The train is scheduled to run five times a week, apart from during India’s four-month summer monsoon when it will go down to just three services. If it proves popular then officials plan to expand it to other lines, likely starting with Ahmedabad in nearby Gujarat state.

Monday’s first run appeared to go down well with locals, although foreign visitors wanting a more traditional Indian train experience may be inclined to avoid it.

“I think the Tejas Express was good and an innovative idea and I would definitely recommend it to my family and friends,” said Parsekar. JB