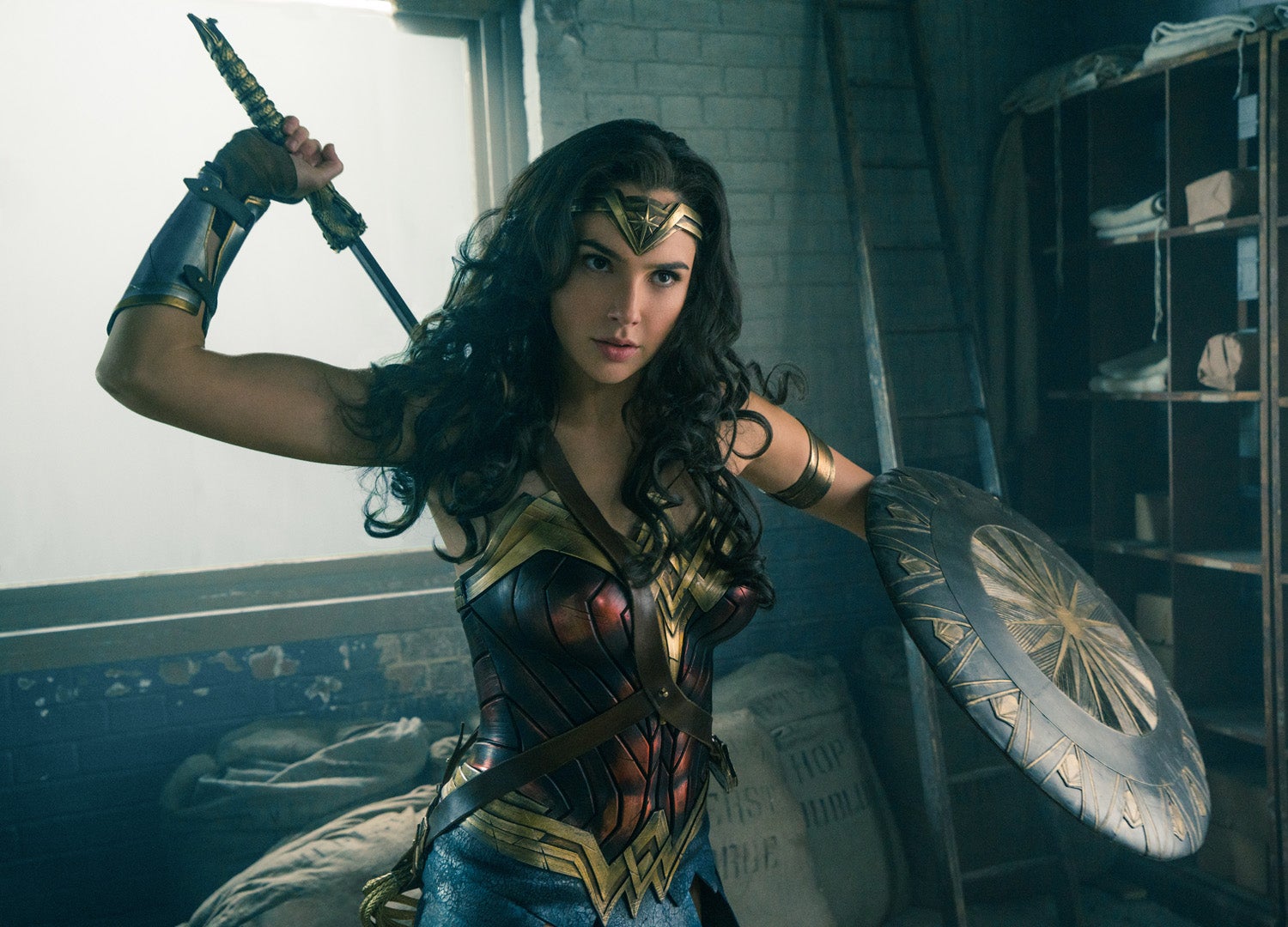 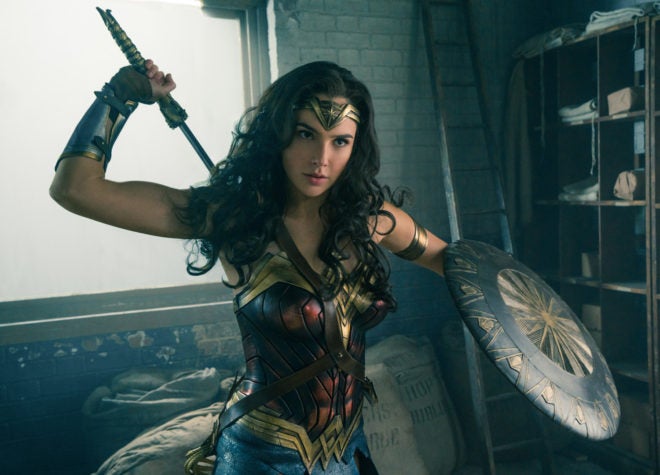 Is there anything Wonder Woman cannot do? The Amazon Princess—the most iconic of all comic book superheroines—is invulnerable, can fly, can lift a tank and wield a mean sword, but has yet to carry her own live-action film.

Created by William Moulton Marston in 1941 for DC Comics, Wonder Woman was the first real female comic book superheroine—the fact she remains popular more than 75 years since her first appearance is proof of this.

While DC’s Batman and Superman have seen entire series of films since their own first appearances, Wonder Woman had never been in a live-action feature film until director Zack Snyder cast Gal Gadot in 2016’s “Batman v Superman: Dawn of Justice,” with many pointing to Gadot’s character being the best part of the movie.

Here it is, and what a wonder it is. “I used to want to save the world,” Wonder Woman says at the very start of the film. What happened?

In this iteration, Wonder Woman is Princess Diana of Themyscira, an isolated island paradise inhabited only by a warrior race of women, created to battle the machinations of Ares, the god of war. Her true parentage is a mystery, as Queen Hippolyta (“Gladiator’s” Connie Nielsen) takes care of Diana as her own daughter—but reluctant to enable Diana to become the great warrior she is fated to be–even as Hippolyta’s sister Antiope (“House of Cards’” Robin Wright) trains Diana in the art of war.

The island’s peace is disrupted in 1918 when American spy Steve Trevor (Captain Kirk himself, Chris Pine) arrives on the island being pursued by German sailors. Once she finds out about World War I, Diana decides to leave Themyscira to help end the war against her mother’s wishes. This plunges Diana into the chaos of the European front of WWI, together with Trevor’s band of misfits and with the blessing of Sir Patrick (“Harry Potter’s” Remus Lupin, David Thewlis). On the front line, she will face the deadly Doctor Poison (a classic Wonder Woman villain played by Elena Anaya) and the glowering General Erich Ludendorff (ever-dependable baddie Danny Huston). But the world of man is not what Diana understands it to be.

Director Patty Jenkins is no stranger to strong female characters. Her edgy 2003 movie “Monster” earned Charlize Theron an Oscar for her portrayal of serial killer Aileen Wuornos. Here, Jenkins plots Wonder Woman’s course as a blade-wielding fish out of water, first, just as an Amazon blending in with modern human society, but ultimately a divine being living among mortals. From her initial naivete, Diana will come to terms with who she really is, and what the world around her is really like.

Clocking in at almost two-and-a-half hours, “Wonder Woman” is almost entirely a long flashback, beginning with Diana as seen in “Batman V Superman.” The movie plods a bit as it releases the necessary exposition, but once Diana comes into her powers, so does the film. There is a moment deep in the movie when it honestly feels like it’s done—before plunging into a suspenseful and genuinely surprising final act.

“Wonder Woman” features what is a reworked, modernized version of the character that uses or teases virtually all the character’s mythology. There are many nods to the considerable continuity of the character but also a lot of retconning. The film’s screenwriter Allan Heinberg knows the material well, having actually written the comic book series. There’s also a bit of Greg Rucka grit and George Perez magic thrown in. The resulting Wonder Woman is someone who can indeed stand as an equal to Henry Cavill’s Superman and Ben Affleck’s Batman.

A controversial choice at first, the Israeli Gadot was born to play Wonder Woman. Her statuesque, athletic physique, dark-haired beauty and, most of all, her onscreen ferocity just explodes from scene to scene. She makes you believe she really is Wonder Woman. Gadot got into the film business as the dangerous, exotic beauty in bit parts in films like 2009’s “Fast & Furious.” This is Gadot’s first lead role and—like her fictional counterpart—she conquers. Pine brings his characteristic good-looking pep to the film and, together with Lucy Davis (playing Etta Candy, another classic Wonder Woman character), brings out the humor to be found beneath the choreographed combat of “Wonder Woman.”

The fact this movie is so well made is incredible considering it serves mostly to establish Wonder Woman’s place in the DCEU (the movie-centric DC Extended Universe, the continuity of “Man of Steel” up to “Suicide Squad” and does not include Christopher Nolan’s The Dark Knight trilogy), as a precursor to the events of “Batman v Superman,” and a lead-in to the events of November’s “Justice League,” which will now be finished by director Joss Whedon after Snyder stepped away for personal reasons.

Yet all that seems secondary to the impressive task of making Wonder Woman whole. When Diana steps out into that battlefield, bright against the murkiness of war, it’s unforgettable. She even has her own theme (originally by Hans Zimmer and Junkie XL, here handled by Rupert Gregson-Williams). Now, this is how you “introduce” a character. This is our Wonder Woman.

Amid the darkness of the DCEU films, there is an obvious exuberance, a certainty of purpose in “Wonder Woman,” an unusual brilliance, like the glint off her armor. The burning question about how good “Wonder Woman” is simple enough to answer: It is the easily the best of the DCEU films, ultimately the best DC superhero flick not directed by Nolan.

“Be careful in the world of men,” Hippolyta warns Diana. “They do not deserve you.” Maybe not, but we can be happy we have this “Wonder Woman.”

In an era where movies based off comic books are now literally a regular monthly occurrence, it takes a lot to impress jaded readers and viewers alike. “Wonder Woman” is that film, the movie that, instead of reminding us of how everything with in went wrong, reminds us instead of what great things you can do with the genre. This is a “Wonder Woman” worthy of the wonder.