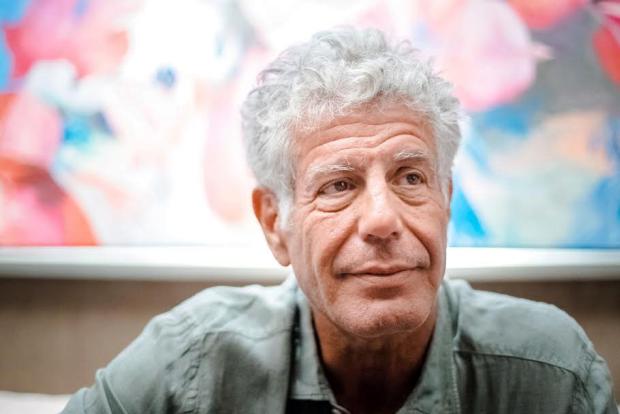 The news that book author and star of CNN’s hit TV show “Parts Unknown,” Anthony Bourdain, would be attending the World Street Food Congress held in Manila this weekend was met with a level of secrecy.

Invitees were asked to keep mum about the venue of the “townhall” meeting held Friday morning. Photographers were told not to instruct Bourdain to stand there or look here; he would be staying only in one spot, and that spot alone. It felt like we were dealing with a taciturn rockstar.

Once he entered the function room at Conrad Manila, Bourdain settled in quite quickly, answering questions with ease but limiting his banter to witty quips and an expletive or three.

Many of the questions centered on Bourdain Market, the ambitious food hall in Manhattan to be located at Pier 57, an abandoned postwar structure on New York’s waterfront.

Once open, the food hall, which measures 14,400 square meters, will have anywhere from 50 to 100 street food vendors from around the world.

Bourdain prefers traditional street food to modern so “even if everyone’s putting cheese on their sushi, you won’t find that on my sushi.”

He said that Filipino food is underrated and underrepresented in the US but is certain that sisig would “set the world on fire,” with or without his help.

In a one-on-one interview with Lifestyle, Bourdain, who travels 250 days in a year, talked about what he packs in his first aid kit, what to expect from Manhattan’s Bourdain Market, and why he still skips the in-flight meal.

INQUIRER: Have you had to use the anti-diarrheal meds?

BOURDAIN: Yes, that’s a regular feature of the road if you travel long enough.

INQUIRER: What can”t you travel without? Non-negotiables?

BOURDAIN: I need my iPhone, a laptop to write, yellow legal pad and a pen, not much else.

INQUIRER: Have you tried anything similar elsewhere?

INQUIRER: When it comes to the prices at Bourdain Market, you said you won‘t “gouge people with the prices.‘

BOURDAIN: No. That’s incredibly important. That’s straight out wrong, the whole idea (of Bourdain Market) is to recreate as best as possible the equivalent of an inexpensive meal on the street, accessible to everyone.

INQUIRER: Any chance for a Jollibee to be included in the lineup?

BOURDAIN: Look, I love Jollibee dearly (he has said he liked the pineapple-topped Aloha burger, the sweet spaghetti, and halo-halo, which they serve in the US stores) but I think a major chain, however wonderful I may find it… no.

INQUIRER: Of all the places you’ve been, which ones would you want to return to?

INQUIRER: Do you still skip the inflight meal?

BOURDAIN: I really try to skip the inflight meal. If I eat, it’s just because I’m bored, have seen all the movies, and am just looking to kill time. You never feel better after the inflight meal no matter how hard they try. I will drink a lot of port wine and eat some cheese if I need to knock myself unconscious. But really, it’s not “Adventures in Dining.‘

INQUIRER: What have you noticed about yourself as a traveler as you’ve matured?

BOURADIN: I’m more empathetic. I do admit that I’m wrong about everything. I think you realize how little you know, the more you travel.

INQUIRER: But don’t you feel that it broadens horizons, etc?

BOURDAIN: In some ways, when you travel a lot you also turn inwards. You think about what it is you do and why you do it. It’s a strange life. I’m on the road 250 days a year. I’m looking out but also looking in.