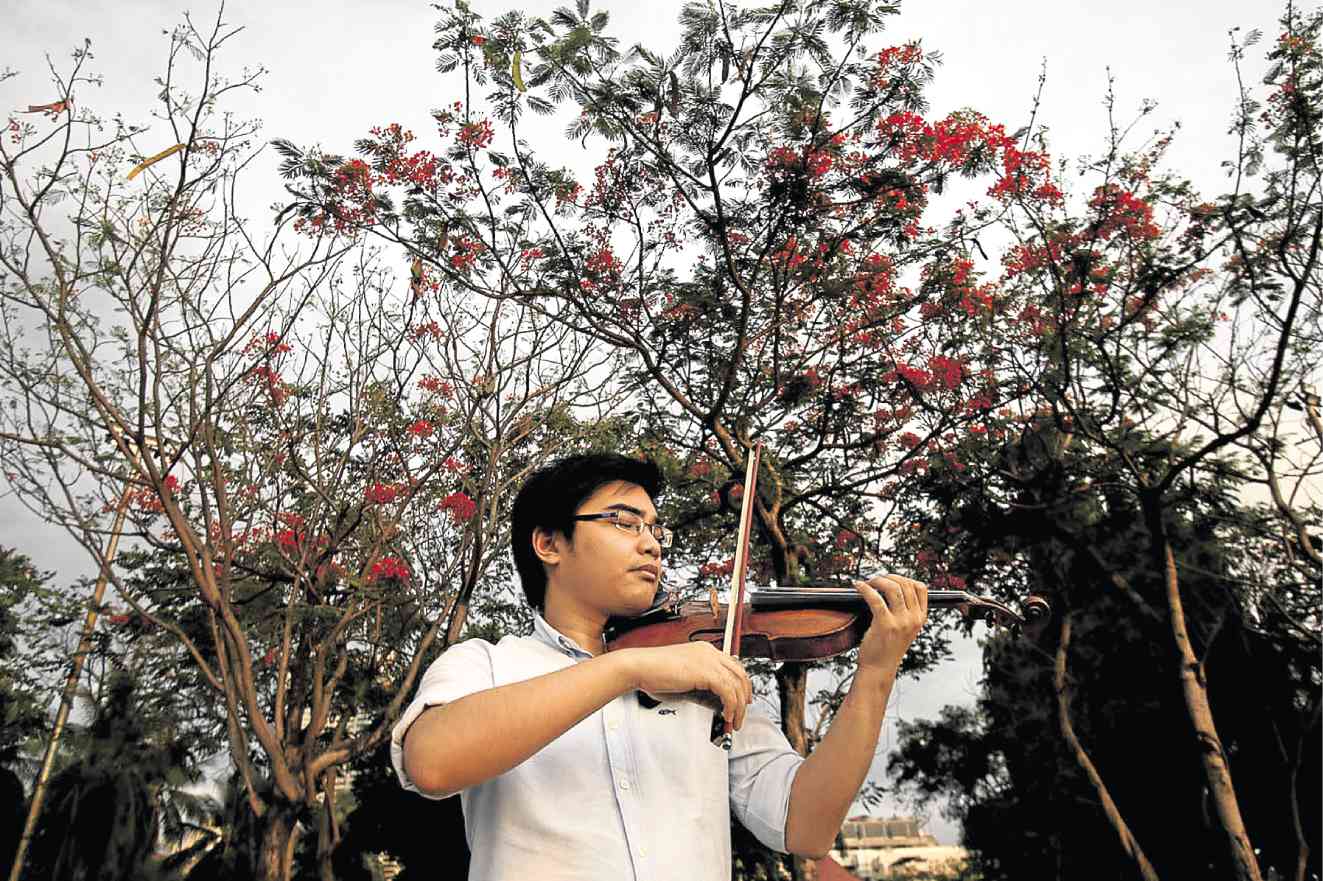 At a university in the heart of Manila, Joaquin Maria Gutierrez was lost in his own zone.

Eyes closed and hands steady on his violin, he played music that soared and swelled, overwhelming the small studio. With an accompanying pianist, Gutierrez played Brahms’ Sonata No. 2 for an audience of two: his parents, who listened quietly but with apparent pride.

After all, this year marked an important milestone in their son Chino’s career — 20 years of making music.

And he’s just turning 27 this year.

The violin virtuoso belongs to a crop of young Filipinos captivated by classical music, whose perceived elitist character he wishes to shatter.

“I think this music genre is underappreciated, but not because it’s difficult to understand,” Gutierrez said in an interview with the Inquirer. “It’s just that we’re so exposed to other kinds of music. We don’t have the same access to classical [pieces].”

While most of his fellow millennials enjoy the more accessible pop hits,  Gutierrez has remained loyal to the violin, the instrument he first fell in love with.

“People always ask what it is about the violin that captivates me,” he said. “It’s just vague childhood impressions. From cassette tapes playing Mozart and Vivaldi, it was the violin that spoke the most to me.”

He was 5 when Gutierrez began asking his parents for a violin. His parents did not really understand why; they were not musicians, though his mother Bambi was a ballerina who danced to the classical pieces that eventually drew his son to the violin.

Two years later, at age 7, Gutierrez would finally get his wish and his first music teacher, Alfonso “Coke” Bolipata, a renowned violinist who mentors young musical minds.  Bolipata took the boy under his wing.

Two years later, Gutierrez would perform his first solo concert in Bolipata’s school.  The following year, the boy would make his orchestral debut at the Cultural Center of the Philippines and perform Edouard Lalo’s “Symphony Espagnole,” the French composer’s most celebrated piece.

As a member of  Metro Manila Community Orchestra under the baton of Josefino Toledo, the bespectacled boy with a bowl cut would soon conquer local and international stages and attract the attention of several music masters, including that of Oscar Yatco, the celebrated conductor and violinist.

“The Cecile Licad of violin” was how Yatco described Gutierrez, referring to the esteemed Filipino pianist who has become a global celebrity.

“[Yatco] heard me play and was very impressed,” Gutierrez recalled.   “He said, there’s someone I’d like you to meet and study with, but you have to come to Germany to audition for him.”

And so, at 11, Gutierrez auditioned for violin pedagogue Jens Ellermann. “It was a big, big yes,” he said of the reception he got from Ellermann.

But the music scholarship came with the condition that he and his parents would move to Germany.  Gutierrez’s mother Bambi said the move was a difficult decision to make, but she and husband Lambert knew it was a once-in-a-lifetime opportunity for their son.

“[Ellermann] was a star maker. He trains prodigies and really knows how to help them reach their potential,” the older Gutierrez said. “He told us Chino would be his last student before he retires. How could we say no?”

Together, they pulled strings and crafted an arrangement that allowed the 13-year-old and his parents to move to Munich to follow the music. Gutierrez studied at  Hochschule für Musik und Theater München while attending regular high school.

To support the family, Ople gave Lambert a job at the Philippine Embassy in Berlin, while wife Bambi stayed home to support their son.

Despite challenges that came his way, including policy changes that forced him to return to the Philippines, Gutierrez excelled in his music studies and became the first Filipino violinist to compete at the Joseph Joachim International Violin Competition in Hannover,  Germany. He has since given performances in Italy, Austria, the Czech Republic and Israel.

The young prodigy would also be the country’s first representative to the Singapore International Violin Festival this week.

But the lone representation of the Philippines in the world of classical music, particularly violin, is something Gutierrez hopes to change.

“Many fellow musicians say I am the first Filipino violinist they encounter,” he said. “I think it’s a shame because we’re a very musical people. We just don’t have the resources [to pursue music as a career.]”

As if following the footsteps of Bolipata, his first teacher who mentored young musicians back in his coastal Zambales hometown, Gutierrez worked to bring his music to provinces. At least once a year, he holds concerts in outlying areas, among them Bacolod and Silay cities.

“I think of it as a way to bring people to classical music,” he said. “In the past years, I’ve had more and more people coming in to my concerts from different fields and sectors.”

State support for the arts plays a highly significant role, he added, citing his case when the government, which did not have the money to support his studies abroad, gave his father a job.

State support “is not just for things like better instruments, but sending kids who show talent and promise to good teachers who can give them the tools they need,” Gutierrez said.

He added: “It’s very important that young musicians are cared for such that they don’t have to worry about anything else but their music.”

In the years to come, Gutierrez said he dreamt of sharing the international stage with a young Filipino violinist. Because despite his well-applauded performances abroad, there is nothing like performing at home, he said.

“For now, I want to continue performing here and in the provinces,” he said, adding that he wished to break the perception that classical music was only for the elite.  “I firmly believe that it’s something that anyone from any class or social group can understand and fall in love with.”

And even as the world beckons, Gutierrez said firmly: “I want to stay here. It’s my country.”