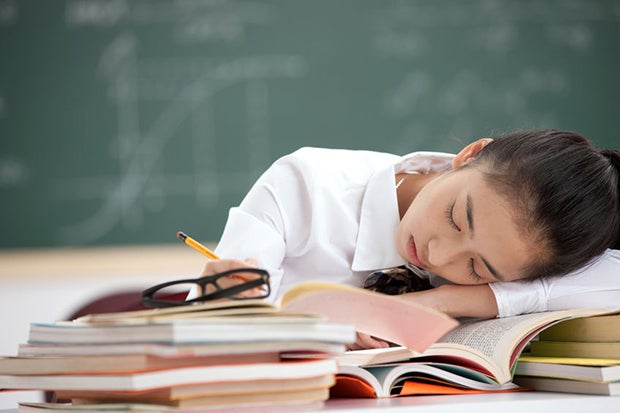 The adage goes that the early bird catches the worm, but for one high school in Singapore, dozing off a bit more spells higher success in school.

According to a Channel News Asia report, Singapore’s Nanyang Girls High made the decision to start at 8:15 a.m., one that concerned parents. Secondary schools in Singapore usually start at 7:30 a.m.

However, this was to address the lack of sleep found in 80 percent of teens. Based on Duke-NUS (National University of Singapore) Medical School researchers’ sleep studies, lack of sleep affected health, grades and cognitive abilities.

The school’s principal, Professor Michael Chee, understands the implications of the study well as he is also a director at the Centre for Cognitive Neuroscience at Duke-NUS. “Your biological clock shifts when you go into your teen years, you start having a preferred sleep time that’s about one hour later. And this tends to shift back when you reach young adulthood.”

One year later, teachers and students alike have responded positively to the time shift. Teachers find their students more energetic, and students have found themselves more focused throughout the entire day.

Some parents who were previously against the move were reported to appreciate the increased time for bonding with their daughters.

The school took six months of planning and adjusting the curriculum schedules to ensure that starting later would not mean ending the day later, and that the entire curriculum could still be covered while leaving time for co-curricular activities after school.

To see if the later schedule had an impact on sleeping habits, Chee has around 400 students log their sleep times. They are also equipped with actigraph watches to monitor their sleep-wake patterns. Based on results, the students were now getting 20 more minutes of sleep on average.

Given that sleep deprivation has been shown to decrease cognitive performance and health, Chee hopes that the Singapore government would implement the later start time across all schools. Niña V. Guno/JB

Lack of sleep boosts chance of death by heart failure