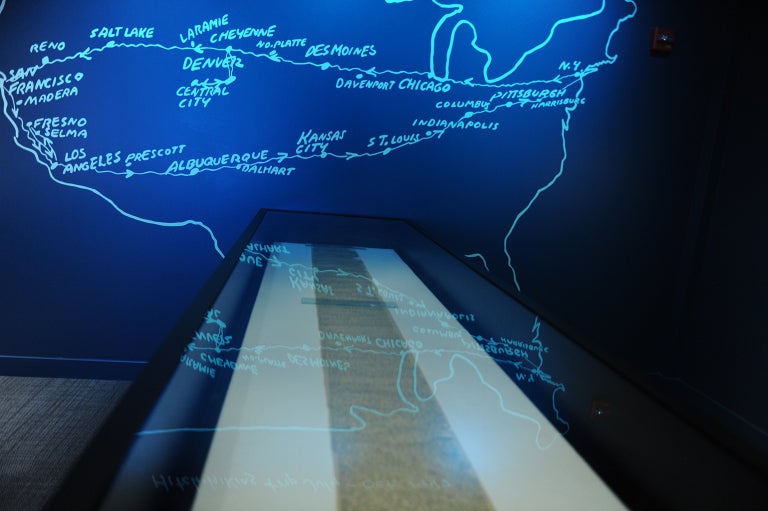 At Chicago’s newly-opened American Writers Museum, Jack Kerouac’s biographer tells an audience how the Beat Generation’s bible was inspired by the author’s deep affection for his country.

“‘On the Road’ is a love letter to America,” says Dennis McNally, standing just steps from the 120-foot (36.5-meter) scroll on which Kerouac typed out his best-known book.

“He loved being an American and he romanticized it,” he said of the novel depicting a post-World War II generation looking to break out of the societal constraints of the 1950s.

The first-of-its-kind museum is dedicated to writers who helped shape America’s history and culture, from Ernest Hemingway to chef Julia Child to rapper Tupac Shakur.

“The theme of the museum is to really look at American writing and American writers, and celebrate them in the way that we celebrate all kinds of people, like sports heroes and movie stars,” said museum president Carey Cranston.

This museum is in fact the brainchild of an Irish immigrant. Malcolm O’Hagan, a retired businessman, was surprised to discover that the United States had no institution dedicated to its authors.

It took seven and a half years to make plans and raise the necessary funds to get the project off the ground.

“I think it took someone with an outsider perspective,” said Cranston, adding that Chicago was chosen for its rich literary past and tourist draw.

The museum’s exhibits breeze through hundreds of years of American literature, culture and history, offering quick glimpses into the works of writers in various genres and media.

A timeline exhibit begins with Alvar Nunez Cabeza de Vaca, born in 1490, who penned a memoir depicting Native American life. It concludes 500 years later with Oscar Hijuelos, the son of Cuban immigrants, who wrote about assimilating into American culture.

“To see the ways in which the words of so many people have moved populations throughout time, I think it’s really inspiring,” said Nura Mazmabi, 38, who was visiting the museum with members of her writing group.

‘We celebrate their words’

The museum also includes a “surprise bookshelf,” an interactive wall that reveals morsels of information about authors through video, sound or text.

The late rapper Shakur is featured for the lyrics to his 1995 song “Dear Mama”, exploring, as the exhibit puts it, “the realities of addiction, violence and poverty.”

Nearby is a tribute to Harper Lee, author of “To Kill a Mockingbird”, the Pulitzer Prize-winning novel dealing with race inequality.

“Even though a lot of people are suppressed at some point in their lives or at some point in our history, their words are still out there, and we celebrate their words. And, I think that’s what makes it American,” said visitor Alex Messina-Schultheis, 25.

One thing conspicuously understated are books themselves, as museum organizers wanted to avoid replicating a library.

While there are rooms with books and places to read, the space is dominated by touch screens, multimedia exhibits and interactive elements such as manual typewriters on which visitors can hammer out a few sentences.

“When you think American writing museum, you think: I’ll just be reading a wall of text. But, it’s very interactive,” said Jennifer Depoorter, 24, who was playing a word game on a touchscreen table.

Also inconspicuous is the museum itself, which occupies the second floor of a nondescript downtown Chicago office building, marked by only one sign.

The humble real estate is a function of the private museum’s relatively small annual budget of $1.9 million and a staff of 10.

By contrast, the world-renowned Art Institute of Chicago, just a few blocks away, has an approximately $250 million annual budget.

“Our initial goal was to raise enough to build this,” said Cranston, adding that plans are for the institution to grow over time. JB