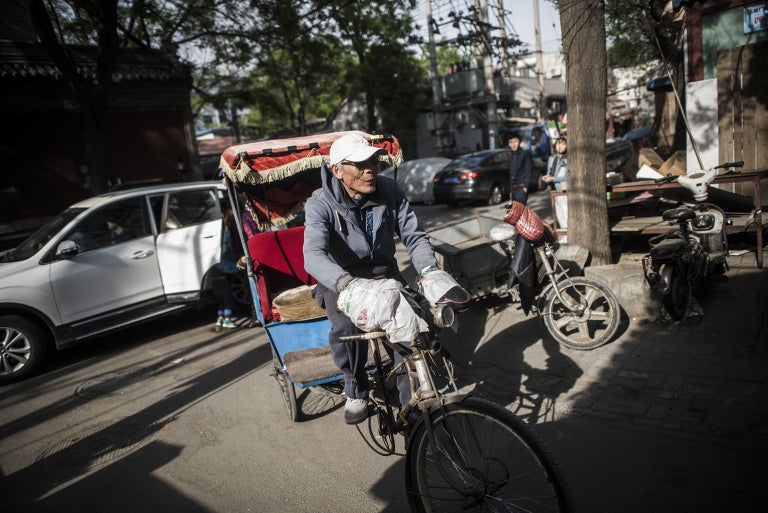 A historic mode of transport, they have survived China’s modernization, and remain an integral part of city living. But for the drivers, life remains a struggle.

Near the lofty Forbidden City, where emperors once lived, a man surnamed Guo has worked as a rickshaw driver for 10 hours every day for the last 30 years.

The boom of cars, electric scooters, and, more recently, shared bikes, has not managed to kill his business.

“It hasn’t changed anything,” Guo said with a smile.

Appearing in China at the end of the 19th century, rickshaws originally had two wheels and were pulled by their driver on foot, with passengers seated at the back.

Today, most of the vehicles are tricycles. Some still have pedals and are propelled by physical force, but the majority are equipped with electric or gas engines.

The drivers must be licensed and operate within government-defined zones, mainly around scenic downtown lakes.

But others tinker with their own vehicles and work illegally, without licenses. They are targeted by police officers who accuse them of dangerous driving, traffic disruptions and tourist scams.

Li Wei is among them. A young father hailing from the impoverished central Henan province, he drives from 8:00 p.m. until dawn.

Working in constant fear of being caught by the traffic police, Li speeds up when he sees a uniformed officer.

Unlicensed work also carries the risk of having the rickshaw, worth 2,000 yuan ($290), confiscated.

But for Li, the rewards are worth the gamble. On weekends, he takes home partygoers spilling out of bars, earning 500 yuan ($73) a night.

This is a hefty sum in China and his wife also works (she is an assistant at a clothing store), but they can still only afford a tiny, dilapidated apartment in Beijing. His father, also a rickshaw driver, lives with them.

It has been four years since Li first took the job, and he confesses he is already tired of earning a living this way. But having worked in factories and restaurants in Shanghai, he concedes that driving for a living is far better.

Asked what he would do instead, if he could, he shrugs his shoulders in defeat. He explains: “I have no idea how I would make a living otherwise.” JB