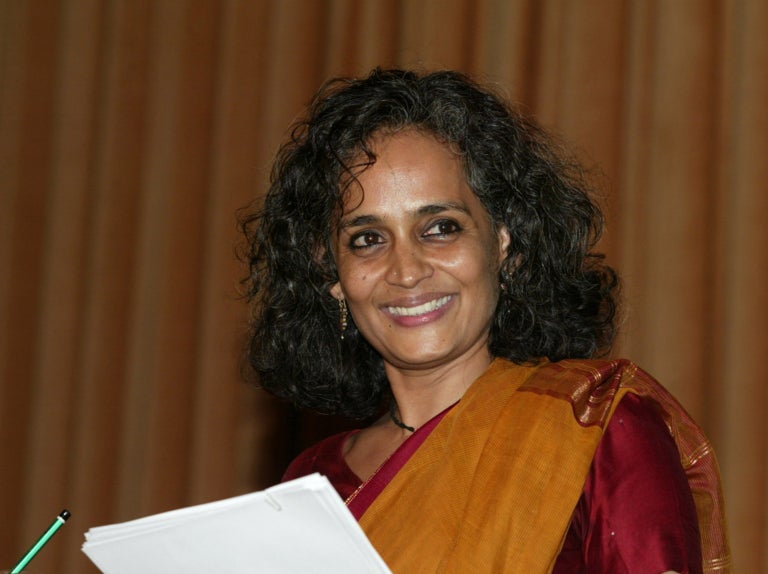 The author’s second novel, “The Ministry of Utmost Happiness”, is a political, poetic, satirical and controversial epic, the first output of fiction since her book “The God of Small Things” won the Booker Prize.

Born in Meghalaya, India, in 1961, Arundhati Roy is the daughter of a Syrian Christian mother and Bengali Hindu father. Her political causes have taken her to live with Indian Maoists in the jungle and visit Edward Snowden in Moscow and advocate for Kashmiri independence. Roy was 35 when she published her debut, “The God of Small Things” to great acclaim. It won the Booker Prize, and sold millions of copies in 42 languages.

In the 20 years since, Roy has published essays and non-fiction, made documentaries, and publicly protested corruption, social issues and environmental degradation. She has been featured on Time magazine’s list of the world’s 100 most influential people. The Guardian noted: “To her political fans, she is the radical left voice of principled resistance; to her critics, the worst sort of adolescent idealist: unrealistic, self-indulgent. She has faced criminal charges of contempt and sedition, been imprisoned, and fled India briefly last year in fear for her life.”

The cast of outsider characters in her new novel is vast and colorful: a transwoman from Delhi, a man from an untouchable background passing himself off as a Muslim, a resistance fighter in Kashmir, a woman in the Maoist rebellion in Bastar, a woman who kidnaps an abandoned baby, and even birds. “Some of these characters disappear for hundreds of pages before appearing again. But the intensity of Roy’s writing—the sheer amount she cares about these people—compels you to concentrate,” praised The Telegraph.

A book review in The Guardian stated: “Clearly, Roy’s scattershot narrative is deliberate; it reflects the fragmentation of the world around us. But there are dangers inherent in the attempt to become everybody and everything, and her clashing subplots and whimsical digressions can become rather unwieldy.” (Nonetheless, the conclusion was: “there are lasting rewards in Roy’s ability to create a bright mosaic.”) The AV Club, however, pejoratively deemed it “narrative schizophrenia.”

The Guardian noted, in a different article, that the book is: “a riotous carnival, as wryly funny and irreverent as its author. The endless parade of oddballs and eccentrics can get a little exhausting, rather like a party at which new guests keep arriving, but Roy’s policy of indiscriminate inclusion is not just an editorial choice; it is the literary expression of solidarity, and the fundamental theme both of Roy’s politics and of the book.” As Roy put it herself in an interview, she is “Just delighting in all the crazies and the sweethearts, and the joy in the saddest places, and the unexpectedness of things.”

“The Ministry of Utmost Happiness” is published June 6. JB