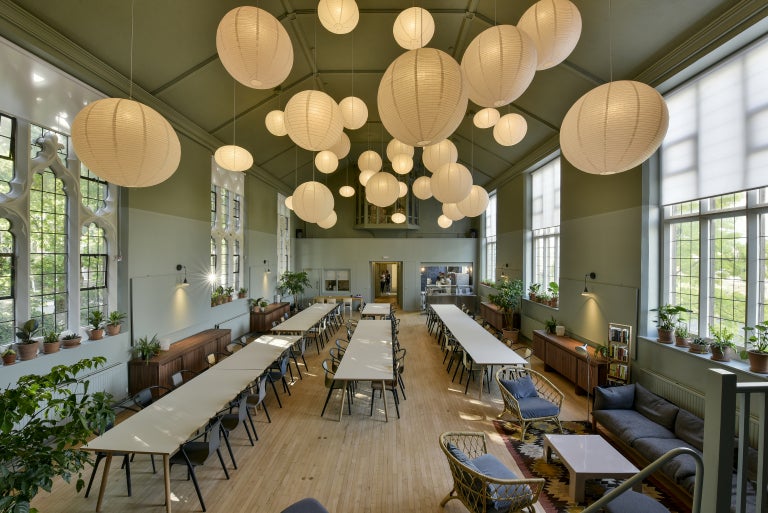 Italy’s top chef Massimo Bottura officially opened the doors to his London soup kitchen this week, where Michelin-starred chefs will turn surplus foods destined for the landfills into gourmet meals for the city’s homeless, elderly and refugees.

This week, Refettorio Felix opened its doors for its first lunch service in London, where Bottura improvised a three-course meal with 50 crates of surplus food that included a vegetable soup to start, pasta with leftover bread crumbs, and a homemade ice cream made with Earl Grey tea and biscuits.

The kitchens will be supplied by unsold food stock from retailers like Sainsbury’s, Marks & Spencer, Fortnum and Mason, Harrods and Whole Foods.

To help inaugurate the new space at St. Cuthbert’s Day Centre in West London this week, Bottura tapped chefs like Alain Ducasse, Clare Smyth and Margot Henderson who will oversee the menu preparation.

Overall, Bottura has been able to tap 50 of his famous chef friends from the U.K. and around the world to lend their culinary talents to the soup kitchen as guest chefs. They include Brett Graham, Daniel Boulud, Jason Atherton, Michel Roux Jr., Sat Bains and Giorgio Locatelli among others.

Refettorio Felix is the latest project to come from Bottura’s non-profit organization Food for Soul, which opened the first soup kitchen in Milan during Expo 2015, turning surplus foods into meals for the homeless.

Along with Refettorio Ambrosiano in Milan, the group also operates similar soup kitchens in Modena, Bologna and Brazil.

Refettorio Felix is not open to the general public, but visitors can tour the space during the weekdays or volunteer. JB