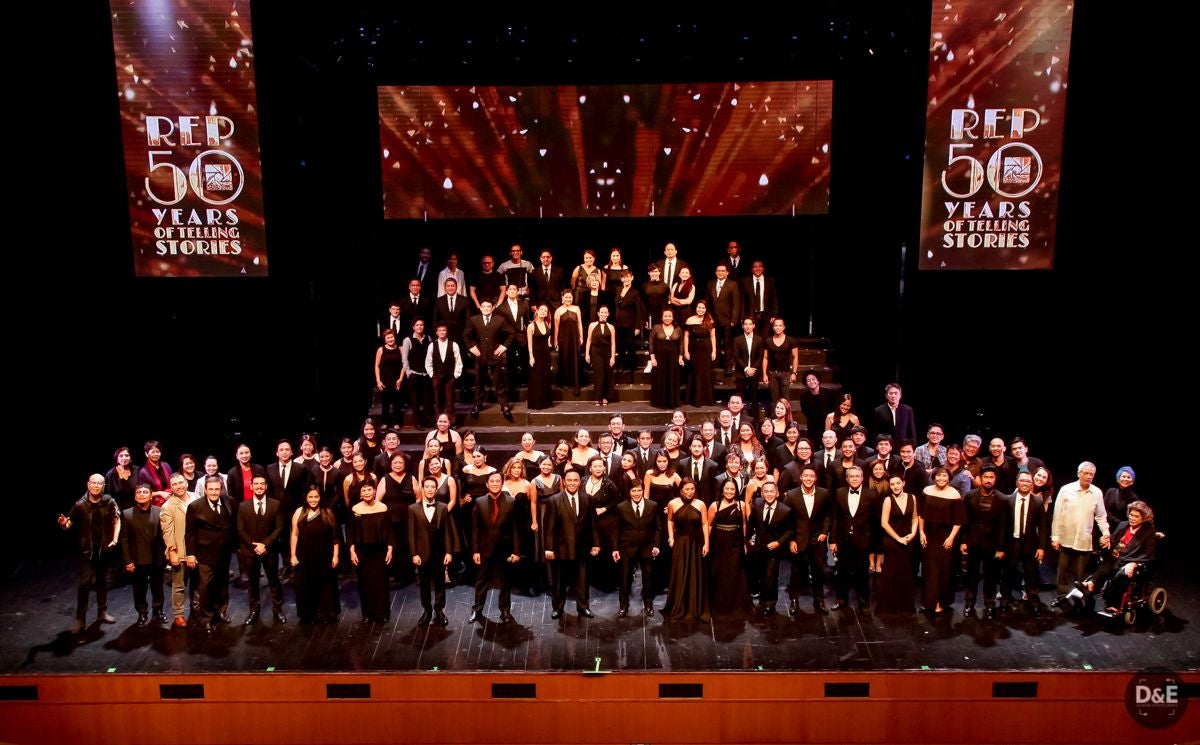 Some of the 130 artists representing several generations of creative talent who performed Sunday evening in Repertory Philippines' musical gala “50 Years of Telling Stories,” among them Celia Diaz-Laurel (right, seated)--PHOTO FROM REPERTORY PHILIPPINES

‘This is our story’: Rep retells 50-year journey with star-studded musical gala

A mammoth cast of some 130 artists representing several generations of creative talent converged on the stage of The Theatre at Solaire on Sunday evening (June 11) for “50 Years of Telling Stories,” Repertory Philippines’ one-night musical gala in celebration of its 50th anniversary this year.

Among the Rep alumni who appeared in one or more numbers in the two-hour show or who acted as narrators were Noel Trinidad, Celia Diaz-Laurel, Monique Wilson, Anton Juan, Mitch Valdes, Freddie Santos, Jorge Ortoll, Miguel Faustmann, Audie Gemora, Bart Guingona, Michael Williams, Menchu Lauchengco-Yulo and Joy Virata. In seven suites of words and music that attempted to tell Rep’s five-decade story from its scrappy beginnings to becoming an institution in Philippine theater, these stage stalwarts were joined by a virtual multitude of “Reppers”—actors of various ages who have worked with the company at one point or the other.

The story is often told of Rep’s improbable beginnings. For a company that would later come to be known for its exclusive English-language repertoire of mostly Broadway and West End material, Rep’s first production was of the Strindberg play “Miss Julie”—in Filipino. And there were only seven people in the audience. That story was recounted anew at the beginning of this gala by two of the surviving founders of Rep, Leo Martinez and Baby Barredo, who recalled that theater in Manila when they started was a gratis et amore undertaking—something that Rep wanted to change by professionalizing the industry and paying its artists, for starters.

Zeneida “Bibot” Amador, the founding artistic director, has passed on. But Amador’s legacy of tenacity and discipline, her insistence that the show must go on no matter what, and that it be mounted to certain uncompromising standards, was repeatedly invoked in the show.

Gemora, in a segment about Rep actors who also had to sing and dance since the company mounted musicals in its season offerings, remembered Amador barking to her performers: “You’re actors—act like you can sing and dance!” And Santos, in the midst of paying tribute to the “unsung heroes”—the set builders, makeup artists, wardrobe and props hands and other people behind the scenes—who kept Rep’s shows together, turned to the audience to quip: “Many of you are here because, at one point or another, we borrowed a prop from you!”

Current Rep president Mindy Perez-Rubio, in her opening remarks, revealed the interesting bit that the evening’s gala was Rep’s 444th show. As show head writer Luna Griño-Inocian would tally it for an earlier contributed story in this paper, the company’s remarkable record spans “50 years, 443 productions, 80 seasons, hundreds of performers and production and office personnel employed, thousands of audience members spanning five decades and about three generations.”

The various suites—directed by the likes of Jaime del Mundo, Raymond Lauchengco, Faustmann, Gemora, Santos, Williams and Lauchengco-Yulo—employed specific show tunes that helped anchor their subjects’ stories. “The Dreamers” segment, for instance, about Amador and her co-founders’ vision for Rep, had Gemora and Williams pairing up on “The Impossible Dream” from “Man of La Mancha”—said to be Amador’s favorite musical. “The Tellers,” about Rep’s signature “triple threat” actors, saw a chorus line of veteran and young performers hoofing to “One” from “A Chorus Line”—among them Virata and Wilson, who were in the original cast of Rep’s production of the Marvin Hamlisch musical.

Guingona headlined the vignette on “the interpreters”—the directors—by performing “Finishing the Hat” from Steven Sondheim’s “Sunday in the Park with George.” He was joined by Sheila Francisco, Pinky Amador, Caisa Borromeo, Carla Guevara-Laforteza, Cathy Azanza-Dy and pop singer Morissette Amon, who, in an earlier segment, also recreated a number from the 2012 Rep production of “Camp Rock” she had starred in along with fellow pop performer Markki Stroem.

Wilson was the star of the finale, singing “The Story Goes On” from the musical “Baby” to toast Rep’s future and the breadth of its legacy, against a backdrop of the names of other theater companies whose founders trace their roots to Rep, among them Actor’s Actors Inc., Trumpets, 9 Works Theatrical, Red Turnip Theater and Wilson’s own New Voice Company.

And to bring home the passing of the torch, the original cast members of Rep’s celebrated 1993 production of “Les Miserables”—Cocoy Laurel, Rem Zamora and Karla Gutierrez along with Gemora, Williams, Wilson, Virata and Faustmann—then segued into “One Day More,” before symbolically handing over the mic to their younger counterparts, among them Red Nuestro, Steven Hotchkiss, Joaquin Valdes, Becca Coates, Caisa Borromeo, Myke Salomon, Hans Eckstein and Abi Sulit.

By curtain call, so many more “Reppers” would ascend the stage to join the over hundred-strong performers. Perez-Rubio had opened the evening by telling the audience that they might not see another show of this magnitude, with these many noted performers on one stage for only one night. It appeared to be a promise fulfilled.–GIBBS CADIZ, Theater Editor

[An earlier version of this story mistakenly mentioned that Monina Mercado—one of the five original founders of Rep along with Tony Mercado, Zeneida Amador, Baby Barredo and Leo Martinez—has passed on. Ms. Mercado is very much alive and well. We apologize unreservedly for the error.]