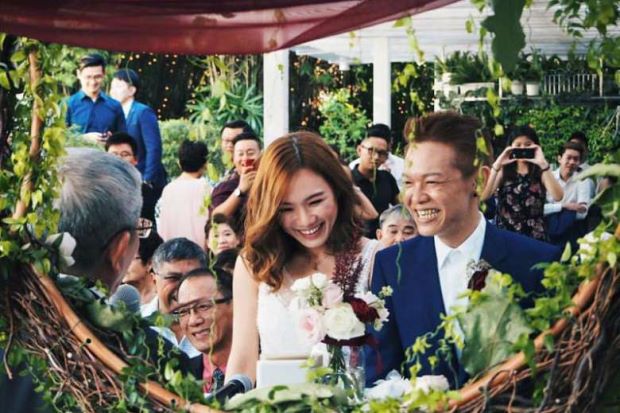 He died on June 8, just a day after his 34th birthday, Shin Min Daily News said.

Koh, formerly a manager at Microsoft, had shared his arduous journey on Facebook.

He was diagnosed with terminal stomach cancer in June 2013, and given only a year to live.

But Koh, known to friends as Ming, beat the odds and survived for four years.

“Hi everyone, am heartbroken to inform everyone that Ming has ended his journey peacefully on midnight… thank you for all the love and support through his toughest journey,” said a post on Facebook on Friday.

“Till we meet again, babe” was the message wife Daphnie Chong, also 34, left on her Facebook page.

Chong told Shin Min that she and Ming started dating when they were 15 years old.

They were devastated when he was diagnosed with cancer.

“I thank heaven he was not taken away a year later, but lived three more years. From that time on, we were determined to live every day to the fullest,” she said.

They held their wedding on Aug 20 last year.

“I couldn’t leave when he was at his lowest… I wanted to be with him every day for the remainder of his days,” she said.

Throughout his battle with cancer, he underwent numerous operations and more than 60 chemotherapy treatments.

He lost weight, but continued to work, travel and exercise.

Ming was still undergoing chemotherapy but his condition took a turn for the worse last month.

He shared his experiences, helped and encouraged them, his mother told Shin Min. The Facebook page is no longer available online.