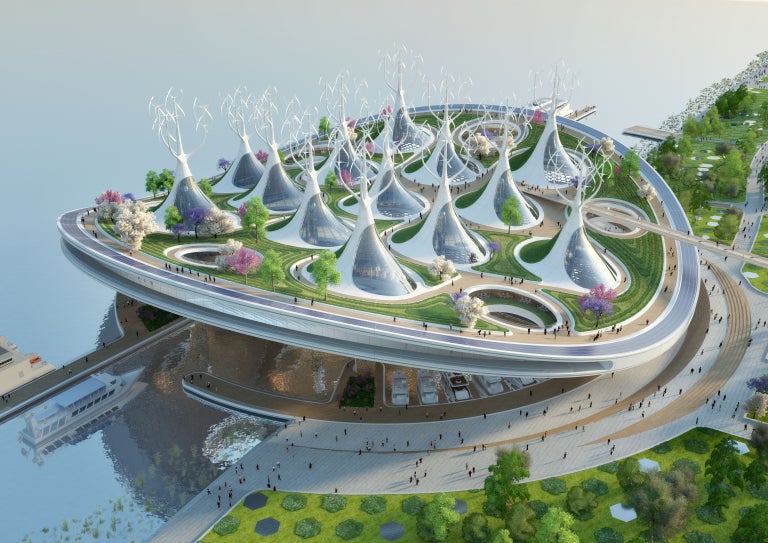 The Belgian architect Vincent Callebaut has released his firm’s designs for a new ferry terminal at the Yeouido Han River Park in Seoul, South Korea, inspired by the manta ray.

It will be located on the Yeouido Han River Park between the Mapo Bridge and the Wonhyo Bridge. In typical Callebaut style, the concept prioritizes sustainable development through the design’s esthetics, functions and proposed construction materials.

This latest offering joins Callebaut’s digital architectural resumé of futuristic, eco-friendly project proposals, of which the most famous is the twisting, plant-covered Agora Garden tower in Taipei, whose construction is tentatively slated for late 2017.

Callebaut has also designed large-scale eco-projects for Paris’s “Smart City 2050” as part of France’s anti-climate-change plan, and for his home city of Brussels. His signature style, self-described as “archibiotic,” features an abundance of vegetation and curving, semi-opaque structures inspired by nature.

A “Biophilic Bridgehead” to the Han river

Floating over the riverbanks like a manta ray, the Korean capital’s ferry terminal and surroundings would play an intrinsic role in the landscape: marsh-like amphibious gardens, willow trees and floating dikes provide support to the river banks in times of flooding. This landscaping would also help restore biodiversity, acting as a bridge between nature and the city.

A cultural hub where nature, art and science grow together

Callebaut’s vision for the Yeouido Han River Park would offer more than just a ferry terminal and green space for city dwellers. The terminal itself contains cultural spaces dedicated to local exhibitions, while the second and third “core” parts of the design feature an amphitheater, pop-up bars, restaurants, organic markets and direct access to the metro below. The proposed Ari Cultural Center would include an arts complex, a science center and spaces for a variety of workshops.

Callebaut explains that “[t]he Manta Ray project strives to be a prime example of energy saving, reduction in carbon dioxide emissions and circular economy.” The buildings would run on solar, wind, biomass and hydropower, while materials used in the constructions would be locally sourced, eco-friendly and recycled where possible.

The Callebaut project for the Yeouido Han River Park sees itself as part of South Korea’s focus on fostering social cohesion and combatting the effects of climate change through infrastructure. JB