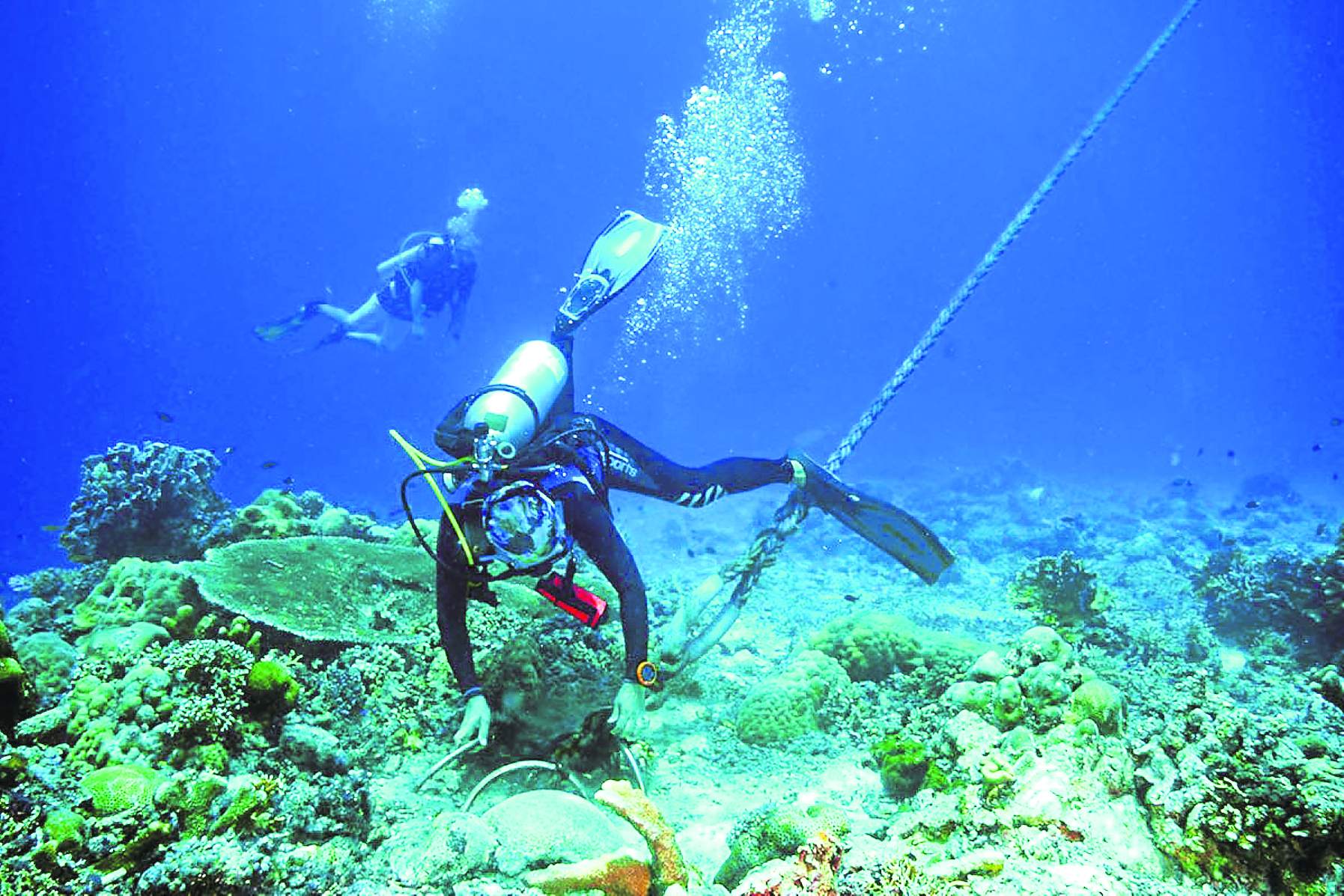 Gloves, part of a scuba-diver’s gear, protect the fingers from poisonous stings when the hands hang on to a rock or coral. At the Tubbataha Reefs Natural Park in Sulu, southern Philippines, however, gloves are strictly prohibited.

That’s because the corals and critters in this marine and bird sanctuary, a United Nations Educational, Scientific and Cultural Organization (Unesco) World Heritage Site (so declared in 1993, the only purely marine World Heritage Site in Southeast Asia), are protected at all cost—they don’t want you to hang on to anything.

Thus, most boats require significant experience for divers signing up for a Tubbataha trip. The diver must possess buoyancy control, a skill developed only after sufficient time and experience to deal with Tubbataha’s unpredictable, powerful currents.

We’re on board the Discovery Fleet’s spacious boat, the Discovery Adventure, along with several friends and fans of this beautiful place. It’s our first dive in Delsan, part of the 97,030 hectares of land and water in one of the Philippines’ richest ecosystems, on a sunny April morning.

The water is—in the words of Yvette Lee, Discovery Fleet Philippines VP for operations, director of marketing and media affairs, and a published underwater photographer—“parang taho,” smooth and glassy and with nary a ripple, reflecting the sky with absolute clarity.

Like all good divers underwater, we keep our ungloved hands to ourselves, marveling at the frenetic pace around us as schools of jacks, massive dogtooth tuna, Napoleon wrasse, and the inevitable Tubbataha complement of sharks—white tip, black tip, gray reef, nurse—make their appearance in steady current.

One diver catches everyone’s eye as she brazenly lays her hands on the reefs, cutting off leftover fishing lines (which she orders me to stuff into a mesh trash bag). Later she’s inspecting large mooring buoys, peering at small patches of bleached or broken coral, or counting Napoleon wrasse in anticipation of a survey of the species (Cheilinus undulatus) scheduled in a couple of weeks.

But nobody is surprised. After all, the back of her rashguard, revealed after she removes her gear, says it all: Mama Ranger. That’s Angelique Songco, known to the diving community as Mama, Protected Area superintendent of the Tubbataha Reefs Natural Park since the Tubbataha Management Office (TMO) was established in 2001. If anybody has the right to check on her beloved backyard, it’s Mama Ranger.

This trip includes several TMO supporters, including major benefactor Pilipinas Shell Foundation program manager Marvi Trudeau, joining the fun on the 47-m Adventure. The boat has 14 cabins that comfortably fit 28 guests, a huge salon that doubles as a lounge area for movie nights and occasional morning yoga classes, and a wonderful staff.

On this trip, Trudeau also turns over a copy of the book of photographs by Tet Lara, “Tubbataha: A National Treasure,” to the management of the Discovery Fleet.

Between dives, Songco also means business. There’s the visit to the Ranger Station, the tiny outpost in the middle of a sandbar on Tubbataha’s South Atoll—originally a 12 x 15-meter box, now expanded with more awnings and a small vegetable garden—that houses the complement of Marine Park Rangers, composed of representatives from the Philippine Coast Guard, Navy and Marines, as well as two regulars from TMO.

Visitors come to buy T-shirts and souvenirs donated by supporters to help raise funds for TMO; Songco has engaged the women of Cagayancillo, the nearest municipality to the reefs which has jurisdiction over Tubbataha, to stitch little plushies of sharks and mantas that visitors grab.

Friends bring pasalubong for the rangers, from water and soda to biscuits and other goodies. For this trip, the boys ask Mama to treat them to some meat; the rangers are the only people allowed to fish for their sustenance in Tubbataha, but the seafood diet can be a little monotonous after a two-month shift, as the station has no refrigerator.

Songco huddles with her boys to check incident reports, which boat is not behaving, which one is suspected of destroying a mooring buoy, which crew might be fishing at night. Songco has the authority to board any boat she wants—and she plans to do just that, to conduct inspections or simply make her presence felt.

She comes here several times during the dive season to either conduct such inspections, or to join research work like the annual seabird surveys. “Of course, there’s the science,” she says. “But sometimes, you still have the hardheaded guys…”

The gregarious Songco—she likes to do a happy dance after every underwater sighting—has been widely credited for leading her rangers and the TMO in helping usher in a renaissance for Tubbataha. Records show that cyanide and dynamite fishing drove this ecosystem to the brink in the 1980s, but the rangers relentlessly patrolled the reefs, apprehended violators, and filed cases.

The illegal fishermen simply got worn down. “Still, you can never rest,” Songco says. “It’s a 24/7 job, and there are many threats that we have to guard against.”

Born in Surigao, Songco served in the Philippine Army and was a divemaster, dive instructor, and dive shop manager before getting involved in Tubbataha—first with the environmental NGO WWF-Philippines, and later with the park’s Protected Area Management Board.

In fact, her husband Norman, himself a dive instructor and boat builder, is credited as having organized the first diving excursion out on to the reefs, after hearing stories from local fishermen.

Songco herself first dove in Tubbataha in 1982, and fell in love with the place—a love that propels her to keep working to protect it. Her sense of stewardship is contagious; soon enough, we are all searching for signs of bleaching, helping her pick out trash (hence, my mesh bag), and watching other divers.

When we spot a photographer from another boat actually lying on the corals to photograph a green turtle, Songco memorizes what he’s wearing—color of the fins, wetsuit design—so she can identify him above water.

Back on the surface, she summons the rangers and boards the boat the erring diver is on to remind the boat manager to keep his guests in check.

One morning, Ranger Segundo “Seconds” Conales tells Mama that they’re concerned about one boat; fishing lines have been found under it, as well as a used spear that was shot from a speargun. The rangers board the Adventure for breakfast with Songco before they go out to inspect the nearby boat.

Suddenly, though, the suspect vessel slowly begins to move away. Songco throws down her napkin and bolts from the table, and the boys are on her heels, leaving half-finished fried eggs and cups of coffee in their wake. The vessel could be facing charges, banning from the reefs, and fines of up to $2,000 if any fish are found in its freezers.

The freezers are empty, and boat management denies any misbehavior. Mama Ranger brings her boys back to finish their breakfast an hour later. “I’m keeping my eye on those guys,” she says. “Nakakainis talaga.”

Those guys notwithstanding, it’s a wonderful trip, although it was the other dive groups, not ours, alas, that see the whale sharks and hammerheads.

Meanwhile, we “only” run into feeding mantas, more tuna, jacks, sharks, barracuda, turtles, stingrays, bumphead wrasse—all of which have Mama Ranger and us busting a few dance moves at 60 feet or so.

Tubbataha is alive and well, indeed. As Songco exclaims after we surface from one magical dive: “This is what makes all the hard work worthwhile.”

If you want to help protect Tubbataha, visit www.tubbatahareef.org.

For information on diving with the Discovery Fleet, visit www.discoveryfleet.com.