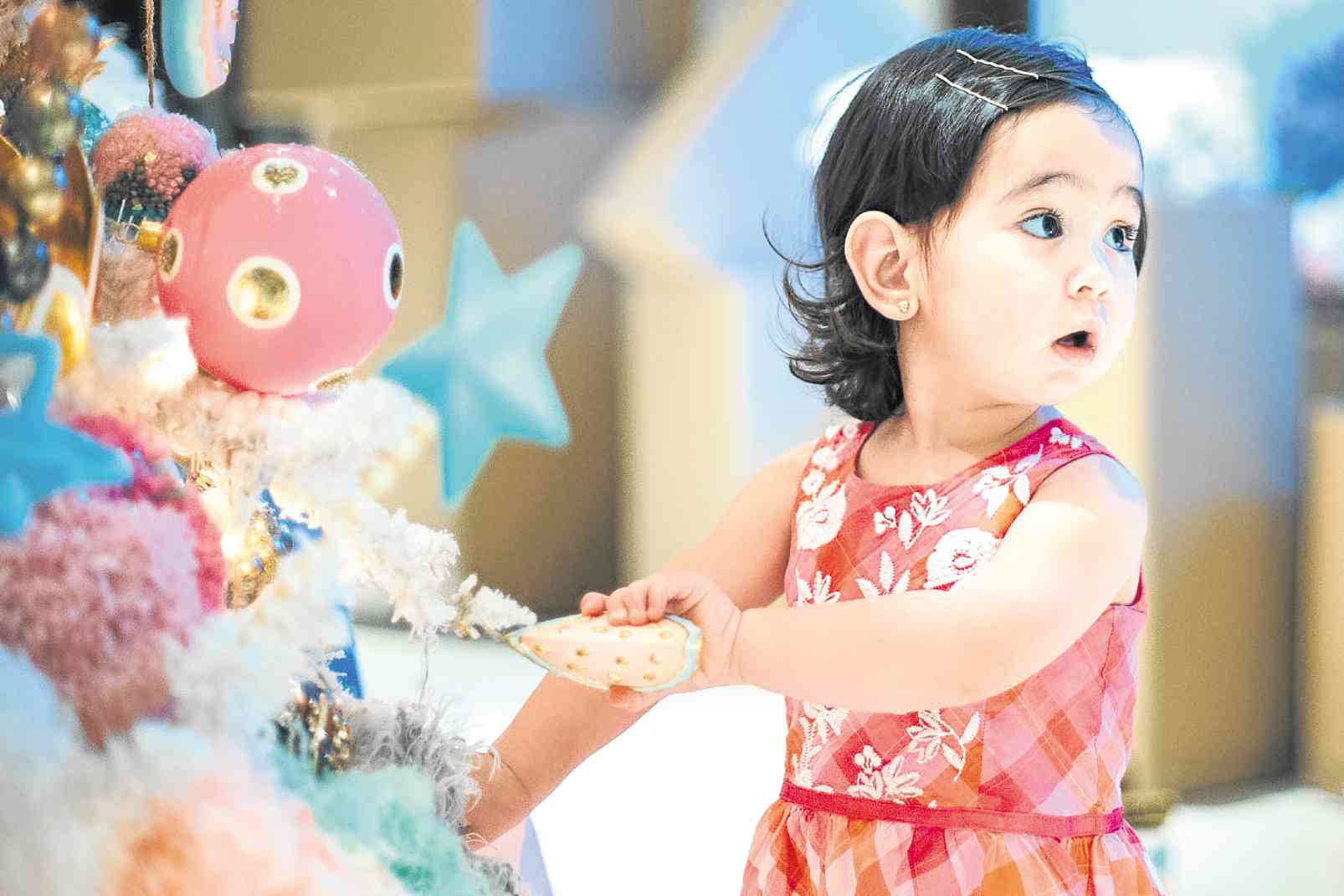 Scarlet Snow, with almost 2 million followers, is seen by many as antidote to a bad-news day.

How does a father raise the world’s most popular baby on Instagram? How do Dr. Hayden Kho and his soon-to-be wife Dr. Vicki Belo parent Scarlet Snow?

As of last count, 2-year-old Scarlet Snow has almost two million followers on IG, making her the most-followed baby in the world—with an average addition of about 4,000 requests a day.

“She’s a cute happy start to a day you know would be filled with bad news of killings, deaths and disasters,” she said.

“That’s why sometimes even if I’m still sleepy, I post, because she makes some people happy,” Kho told us over dinner with Belo, arranged on a spur of the moment by our columnist, Tatler editor in chief and friend Anton San Diego and another friend who hardly goes out at night, Menchu Katigbak, easily one of the most consummate hosts in Manila.

Even Belo, looking so perky and pert in her new bob, is hard put trying to explain her daughter’s incredible popularity in IG. “We really hardly go out to the mall, and when we do, people have photos taken with her,” she said. And the mother—a driven career woman who’s happiest when she’s blazing the beauty industry trail—is sometimes anxious that the tyke would not be in the mood to have her photo taken.

When malling, Kho would hoist Scarlet Snow up on his shoulders so she doesn’t have to walk and be stopped by people.

“There are other more beautiful babies in IG,” an incredulous dad said and added, “It must be because she could really be charming.”

“That baby is intelligent,” a woman who’s a hardcore Scarlet Snow follower once told me, and we wondered how she could have known for sure from her IG. 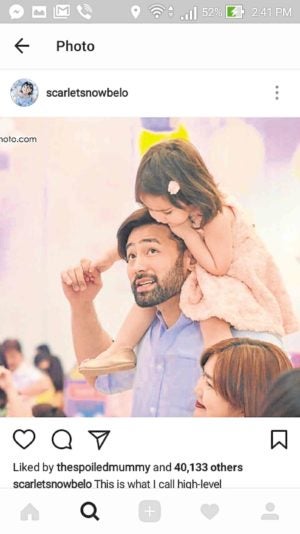 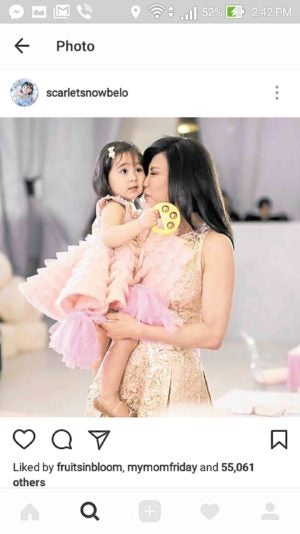 Perhaps it’s because her posts show her in various activities—singing, dancing, answering questions.

Well, she has Mandarin lessons many times a week, so she can speak a little Mandarin. She has her gym and dance classes. She has lessons in swimming, voice, reading. Kho teaches her math.

What I’ve observed is the hands-on parenting of Kho and Belo. She’s always with them or their friends, so that this baby must be used to adult company by now.

Scarlet Snow can be told to behave—sometimes with just the tone of voice of mom or dad.

We asked Kho, what do they do to not spoil her?

“One word: discipline,” he said. “If she doesn’t obey or if she misbehaves, she will receive the ‘rod of correction.’ We don’t let Scarlet Snow get away with her little crimes—ok, sometimes we do, especially when she makes ‘pa-cute,’ but only on the relatively unimportant ones.

“Our formula for proper correction is kindness + firmness + consistency + love. And an important point to make is that love will sometimes hurt.

“But first and foremost is, she is loved before anything else.”

What’s your number one parenting rule?

“My number one parenting rule is: ‘God’s standards, not mine.’ I recognize that Vicki and I are merely stewards of the life of this child so the one who has the ultimate say on how to raise her and by what moral standards is God. He is the ultimate authority figure in her life (as He is in ours). This means that we choose Biblical truths over any unbiblical ‘parenting techniques,’ even if it is the most popular one or the most scientific.

“As much as possible, we teach Scarlet Snow these truths—we let our actions speak. This, to me, is the hardest task because, finally, I wouldn’t dare consider myself one of the most self-disciplined persons in the world. But I try my best anyway—I have to because I want Scarlet Snow to develop a habit of doing right, serving and honoring God as she learns to make her own decisions.”

Kho added with candor, “Fortunately, Scarlet Snow is not a difficult child at all. She’s very sweet and loving, even though she can be really naughty. I can’t complain. Who else would she get that from?”

And yes, sometimes when she misbehaves she can be sent to stand in a corner.