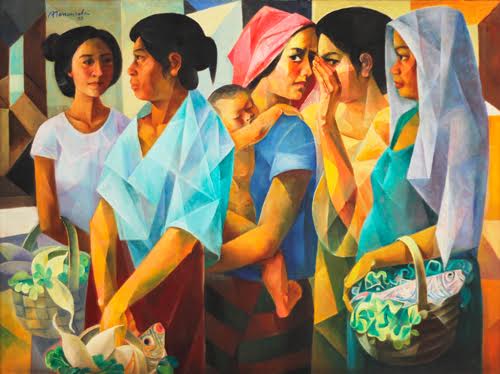 The price achieved for Ang Kiukok’s 1981 oil-on-canvas “Fishermen” during León Gallery’s Spectacular Midyear Auction on June 10 broke all records for Philippine art sold in the country. It fetched a whopping P65.4 million.

The previous record for the most expensive piece of Philippine art to be sold at an auction in Manila was Anita Magsaysay-Ho’s “Fish Harvest at Dawn,” which was sold for P52.56 million in 2015, also at an auction by León.

“The auction was completely remarkable,” León Gallery director Jaime Ponce de León said. “Of course, there were a number of superlative pieces of unmatched, unrivaled quality that set it apart from all other auctions!”

Vicente Manansala’s oil-on-canvas “Pila sa Bigas” was sold for P30.37 million, making it the highest ever paid for Manansala in a Philippine auction. It is also the second highest-amount to be achieved for the National Artist in the world. The highest amount paid for a Manansala work was P30.66 million, for “Tiangge,” in an auction in Hong Kong last April.

León Gallery again broke its own record in this auction with the sale of Romulo Olazo “Permutation Series II, No. 118 (B-XX)” at P 7 million.

Fernando Zóbel’s “Zurbarán SL–II” in oil and tempera on masonite board was sold for P7.59 million.

Another sought-after piece was José Joya’s 1962 oil-on-canvas “Carcass,” one of the nine Joya paintings at the 1964 Venice Biennale. The painting was sold for P19.86 million.

Fernando Amorsolo’s 1917 painting-on-photograph “Igorot,” which was completed two years before he left for Spain, was sold for P3.97 million.

The first edition of José Rizal’s “Noli Me Tangere” (in very good condition) was sold for P3.74 million. The book was previously in a South American Collection until it was consigned to León Gallery by a Spanish collector.

The Maximo Viola Bed, a collaborative work between Isabelo Tampinco and Emilio Alvero, was sold for P4.67 million. The bed was owned by the nationalist friend of Rizal and known to be the man who saved the “Noli Me Tangere” for lending Rizal money for the book’s publication. —CONTRIBUTED