Where will you be on New Year’s Eve? | Lifestyle.INQ ❮ ❯ 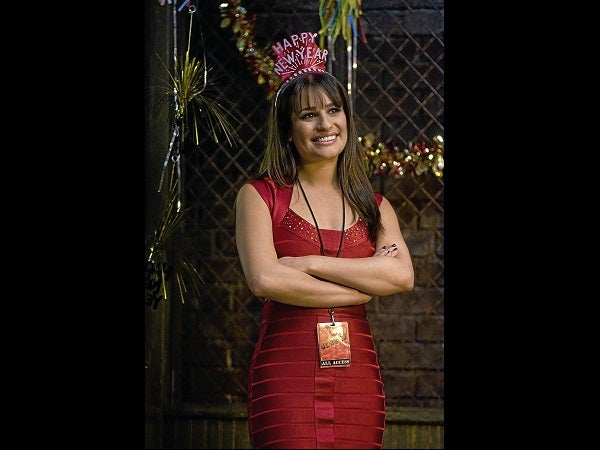 Where will you be on New Year’s Eve?

Hot on the heels of the hit movie “Valentine’s Day,” director Garry Marshall has gathered another ensemble cast for the upcoming New Year’s Eve.

The film features a host of characters and several storylines that interweave and culminate in the world-renowned celebration in Times Square, New York, on December 31.  Four stalwarts among the star-studded cast talk about the movie and their own experiences of New Year’s Eve. 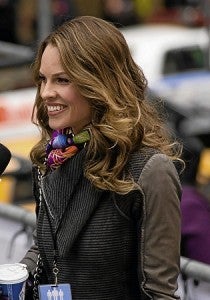 I play Claire Morgan, who works for the Times Square Alliance. Their job is to keep Times Square clean, and make sure the ball drops at midnight. This has to be on time and it’s a big moment for her.  Everything is the ball. She is excited to be there, and a little naïve with the press.

It has been fun getting to know the people who work at the Times Square Alliance and getting to see the workings behind the ball drop. You always think it just happens, but of course, it doesn’t just happen.

What was different about this movie for you?

Working with Robert DeNiro and Halle Berry was fun. I know both of them, but this is the first time any of us have worked together. Robert is very kind and funny. He’s got a great smile and he’s a sweetheart.

It was really quiet on the set and Halle was in the bathroom connected to where we were doing the scene. I thought she was really preparing. She comes out, takes the clapper and she goes: (in high-pitch voice) “Yo, yo! It’s a Garry Marshall movie! Take two!” She inhaled helium in the bathroom! I just burst out laughing. It was a fun set.

I always find New Year’s Eve such a letdown, and once I let go of the fact that there is somewhere else I should be, I start enjoying just reflecting and being with people I love.

Quite honestly, I often don’t make it until midnight! I’m 36 and already I’ve become like a grandma. I usually have friends over and have a nice dinner. We just sit around and reflect on the year and talk about what we want to have happen next year in our lives.

Sometimes, we do a fun thing where we write down what we want to have happen in our lives and we fold it up, save it, and bring it back the next year. But I usually never make it until midnight. That’s why I watch the ball drop on TV, because I’m in LA and at 9 pm, the ball drops and we all go: “Happy New Year!” 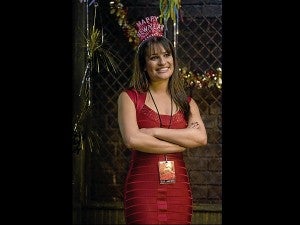 Who do you play?

Elise—she lives in the same building as Ashton’s character, Randy. She’s a singer and working as a backup singer to a rock star (Jon Bon Jovi). She’s on her way to perform in Times Square when she gets stuck in an elevator with Ashton. She’s really spunky and is probably doing what I would be if I weren’t working as an actor. So I understand the character, and it’s easier to get into the character for me.

But it’s difficult in that I’ve just been doing Rachel (Berry, in “Glee”) and they’re very different. So on Wednesday, I was Rachel and today, I’m Elise. I’m so used to playing this 16-year-old girl in high school and then, all of a sudden, I’m playing a woman.

What makes this movie fun for you?

This is unbelievable! How cool is it? I’m a New Yorker. I grew up in New York. So on the first two days of shooting, I get to be in the center of Times Square, singing, with Garry Marshall, Ashton Kutcher, and Jon Bon Jovi! Garry Marshall is the nicest person in the entire world. This being my first movie, I’m so lucky to have a director who is so nice and so helpful and so wonderful because I’m so scared!

I met Ashton once at a party before this, but this is the first time that we’re spending a lot of time together. I feel like we were in the middle of Times Square with almost the entire world watching us. I mean, who else has he kissed? Natalie Portman, Katherine Heigl—just another day of work for him. For me, I’m like… (shocked expression) He did tell me that he’s going to help me get more Twitter followers, so I’m going to take him up on that!

I think every job and experience comes with different challenges. I definitely get nervous for sure. I’m the kind of person who gets excited about the things that I do. But I hope that never goes away because it means that I’m doing something that is worth it.

My family and I—New Year’s is a big holiday for us. One year in Times Square, I was in a building right across from the ball. It was incredible! I got to look down at everything. I wasn’t on the ground because it sounds like a war zone! I would never do that. I would be terrified. So I did that one year, but every year, my family and I go to Central Park and there’s a band there and fireworks.

Every year, there’s a midnight race and so it’s a big tradition for me and my family to go do that. I’ve been doing this for the last five years. My best friend Jonathan Groff, who is on “Glee” with me, and his family come with us, as well.

I believe in everything about New Year’s. I believe that you should go into the New Year with the way you want to spend your year. My family and I always keep little pins on us. We wear special things. I have a headband I wear every year.

We believe in a lot of the superstitions and at the beginning of the movie, there’s a great reference to each different culture. Some eat like 12 grapes; some believe that if you’re laughing, then it brings happiness into the year. This year I’m going to be laughing and eating grapes, wearing my pins and headband, and running in Central Park. It’s going to be great! 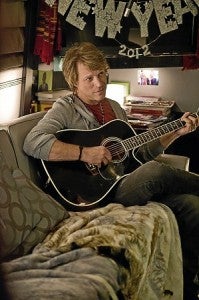 This guy (Jensen) is much newer (than me). He made a couple of records and he left a girlfriend and he wants to win her (Katherine Heigl) back. He seems like a genuinely good guy. I don’t know if your perception of me is good or bad. Garry (Marshall) see things in colors and from the minute I met him, he said, “This guy, Jensen, I see him in black and red.” So that’s easy. I like a lot of red and a lot of black. They (the costume people) took one jacket out of my closet and they made a red one like it. In this scene (that I just shot) I sing an Otis Redding song called “Can’t Turn You Loose.”

What was different about this movie for you?

Didn’t I say I quit this? I did! Halle Berry asked for me to be in it, and who in the right mind would say no to Halle Berry? My wife even high-fived me on this. And I agreed to do it. It was as simple as that. Of course, Garry Marshall is a living legend. Because of Halle and Garry, I said, “What the hell?”

Getting back in front of the camera, I realized that I still love it. Having a real director like Garry and being in a movie that has more money in the catering budget than the kind of movies I have been doing allows for things like multiple takes and great lighting.

Acting is the reason I’m here again today, the reason why the band is as successful as it is today. Because acting, when I first studied it years ago, changed the way I think about music, and it added a great humility to anything and everything I did after that. It was exciting to go to the set, exciting to learn. You take that humility back to the music and that’s why, 30 years later, we’re the biggest touring band on the planet because you keep fighting for it.

New Year’s is a beautiful day because there’s no pressure, no exchange of presents. It’s the end of something old and the start of something new so I always enjoy it. No one in his or her right mind would go to Times Square! I watch it on TV. I wonder if it really happens, or it’s all CGI? It’s too cold! I’m not going out there in the cold!

I’m not locked into just Times Square. You flip it around from the time you wake up and I’m watching it in Sydney, until it ends in Hawaii.

In September 2002, a year after 9/11, the NFL kicked off the season after having cancelled the year before. The mayor who had just come into office, Mayor Bloomberg, asked us to play. So, a half a million people showed up in Times Square and we performed to kick off the season. So I have been there in calmer, nicer weather. I witnessed it that way.