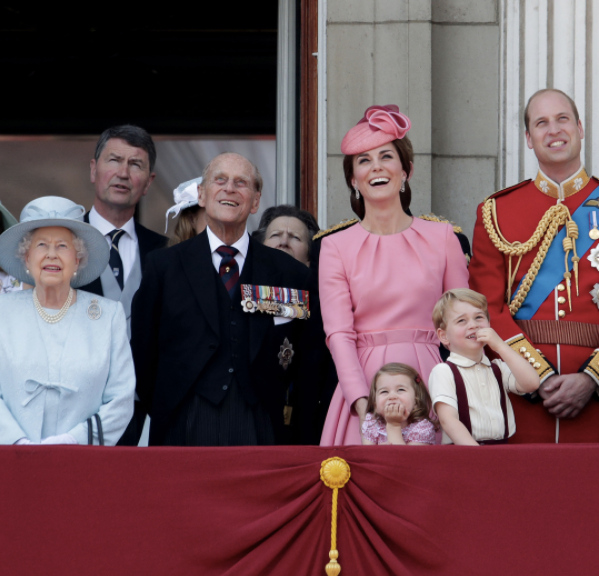 This is the Queen’s chance to inspect her personal troops which include 1,400 officers, according to The Telegraph.

The entire royal family was invited and watched the parade from a balcony.

Understandably, it’s a lengthy spectacle, and Prince George wasn’t quite enjoying the way his great grandmother was spending her official birthday:

The Queen celebrates two birthdays, the day she was born and an official one to coincide with Trooping the Color.

Prince George probably wondered why one wasn’t enough. Meanwhile, the Duke of Cambridge, Prince William, was watching out for his son’s behavior:

However, the Duke himself can’t blame young George, as he was once in the same position:

George and his sister Princess Charlotte, who is two years old, showed enthusiasm for the flypast, where the Royal Air Force performed an aerial salute.

The flypast comes to an end with the Red Arrows creating a stream of red, white, and blue against the dazzling blue London Sky pic.twitter.com/jxdWgkKuZ4

The younger royals are identifying the planes in the fly past from a book they are reading #TroopingtheColour pic.twitter.com/fstkHzOxY3

Fortunately or not, Prince George may be king one day—he is third in line to the throne—and he’ll need to sit through more of these ceremonies. Niña V. Guno/JB