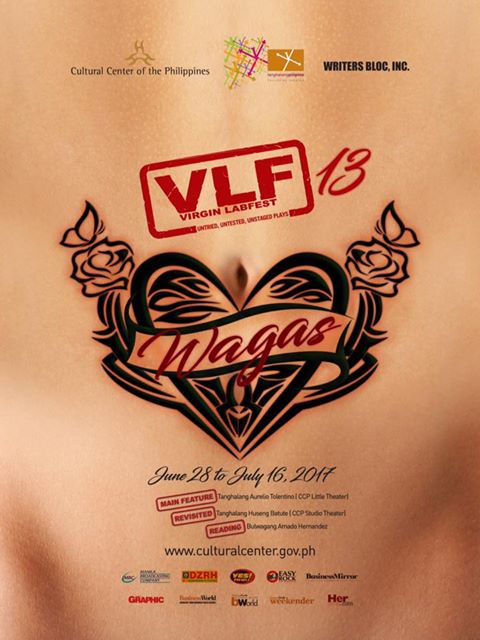 Thirteen brings nothing but good luck for this year’s Virgin Labfest, with the theme “wagas”—“pure” or “virginal,” or, in a more colloquial sense, “all out.”

A bigger venue at the Cultural Center of the Philippines (CCP) will serve as the stage for the three-week-long festival. The 12 new works of untried, unstaged, unpublished one-act material will be performed at the Tanghalang Aurelio Tolentino or The Little Theater, with a capacity of 421. In previous years, the festival was held at the CCP’s black box theater, Tanghalang Huseng Batute, which only seats 250.

“Set E, or the Revisited Set of three plays from last year’s festival, will still be staged at Batute, while the Staged Readings, as in the previous years, will be held at Bulwagang Amado Hernandez,” said festival director Tuxqs Rutaquio.

Since Batute will be the exclusive venue for Set E, it will have 12 performances, plus more days when it runs simultaneously with the new plays at the Little Theater.

But there’s no excuse to miss the original plays because there are also more dates for each set than in the previous years.

The number of attendees has  increased exponentially over the years, with recent Labfest editions playing to sold-out crowds. Last year, there were requests to extend the festival to a fourth week, but as “twice-devirginized” director (as well as CCP’s department manager for production and exhibition) Ariel Yonzon pointed out, the availability of logistics, venues and the artists’ schedules had to be considered.

Since he started watching the Labfest years ago, Siguion-Reyna said he had always wanted to direct an entry. “There’s so much luxury here to create, starting from the rehearsals with the actors. There’s freedom to innovate even after the first performance.”

Also a first-timer at the Labfest is veteran actor Michael Williams, who will direct Oggie Arcenas’ latest entry, “Loveteam.” This story tackles an aspiring actor’s dream to make it big in show business no matter what.

Twenty-one-year-old playwright Rick Patriarca, who debuted in last year’s edition in the well-received domestic farce “Hapag-Kainan,” returns this year with a new work, “Birdcage,” to be directed by Ian Segarra. “Birdcage” is about two longtime call center employees contemplating a career change after most of their workmates moved on to other pursuits.

Another returning young playwright is Eljay Castro Deldoc with “Pilipinas Kong Mahal With All the Overcoat,” about the proliferation of fake news. The play will be directed by Roobak Valle.

The works of Arcenas, Patriarca and Deldoc comprise Set A, which will open the festival on June 28, Wednesday, with 3 p.m. and 8 p.m. performances.

For first-timers and aspiring playwrights, the first week is highly recommended because it features talkback sessions with the playwright, director and cast members after each performance.

Set 3 is reserved for the workshop showcases of participants of the Labfest’s annual Writing Fellowship under playwright Glenn Sevilla Mas.

The 13th Virgin Labfest serves as Tanghalang Pilipino’s season opener for this year and is held in partnership with The Writer’s Bloc and the CCP. It runs on June 28-July 16, with 3 p.m. and 8 p.m. performances.

Bigger venues, a longer run, more collaborating artists than ever—for this Labfest, as Yonzon said, “13 is a lucky number.”