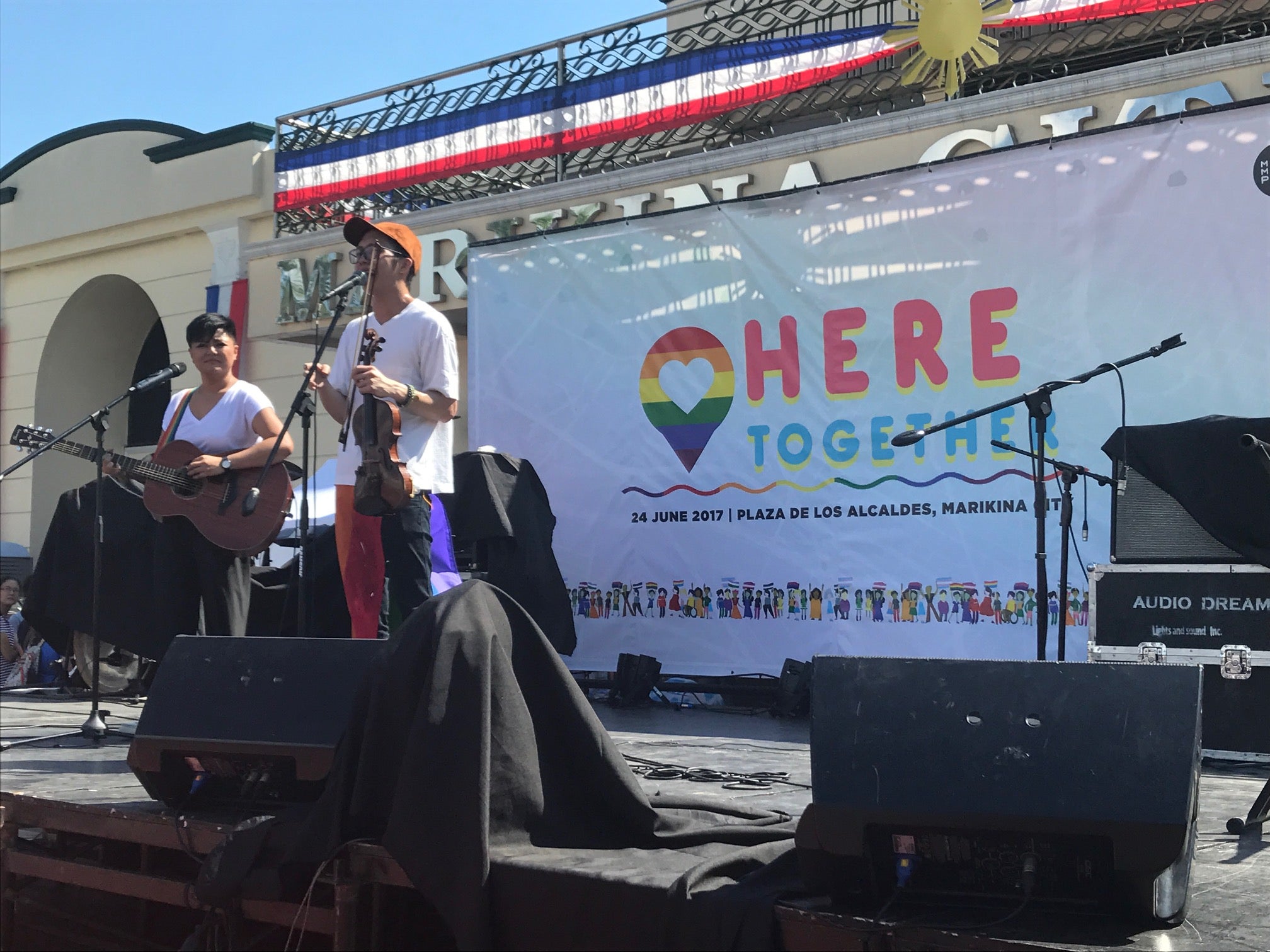 “Love is the currency of our struggle. Love will win. Love triumphs hate. We will win.”

Gracing the celebration of the annual Gay Pride Month themed “Here together” at the Marikina City Hall, Senator Risa Hontiveros said these words in front of a thousand members of the lesbian, gay, bisexual and transgender and queer community who also participated in the annual gay parade on Saturday afternoon.

“The Commission on Human Rights filed for the first SOGIE-specific (or for persons with different sexual orientations and gender identity or expression) anti-discrimination bill in Congress. Seventeen years after, we are still here to march for equality, for our right to decide and become who we are, for our right to love. We march to show that the same rights we have pushed before are the same rights we are pushing for now. We assert the space of the LGBT community. We march for Jennifer Laude… we march for our kids bullied in school. We marched for those who cannot,” Hontiveros told the roaring crowd.

Hontiveros also hit Duterte’s government for “letting hate win” by choosing to “abstain” on issues pertinent to the LGBT community in a past meeting at the United Nations Human Rights council.

“For a country that is considered by many as liberal and tolerant of different views, Philippines has a long way to go to ensure the lives and the rights of the LGBT people. Even the attitude of the government is disturbing,” she said.

“The president’s ‘machopolitics’ has failed LGBT voters, he only paraded himself as an ally during the campaign season…The change he promised has been replaced by an endless parade of strongman tactics,” Hontiveros added.

“The irrational and deadly prejudice against those who do not conform to traditional notions of sex identity and sex orientation represent a deep-seated hatred that we refuse to acknowledge and address,” she said.

Superstar Nora Aunor also attended the Gay Pride celebration in Marikina City late afternoon: We are free to love anyone whom we choose to. We are free to marry the people we love.

While the celebration is ongoing, various religious groups carrying placards, stayed outside the festival grounds to show their opposition against homosexuality and same sex relationships.

Michael, 30, a minister explained, “(Being an) LGBT is a sin… Many of them have HIV, that’s true; we (also) want to protect them from that.” “God’s law, one of the ministers emphasized, is about integrity, obedience to God’s words and self-control.”

Some of the opposing groups’ placards read: “Jesus or hell;” “Go and sin no more;” “God is Angry” with the “Wicked everyday,” which also cited the bible verse Psalms 7:11 (God is a righteous judge).

The Metro Manila Pride is the longest running pride in the Southeast Asia, and the biggest in the Philippines as far as Batangas, Davao and Cebu, said its organizer Nikki Castillo of the Metro Manila Pride. “We have members from all over the country,” she added.

“Every year we have different themes. This year we focus on the solidarity, not just same sex marriage. We want the unity of the LGBT and the non-LGBTs. We wanted the support and protection of the people,” she added.

Castillo said they started the annual gay parade as several members of the community have not yet or were not yet able to exercise their rights; many still do not feel free and safe. “We hope that they will experience freedom, and be able to show and celebrate their true selves,” she added.

Castillo said there are 7,000 people who registered online, but around 5,000 people braved the afternoon heat, with their umbrellas as they listened to various speakers pushing for LGBT rights.

The group, supported also by the Commission on Human Rights, pushes for the passage of the anti-discrimination bill, adding that LGBTs should be recognized and considered in the creation of government programs.

Also present at the Pride March was the Pinoy Deaf Rainbow, Inc., an LGBT and deaf community which started in 2010 to promote HIV and Aids awareness online. Its vice president told the Inquirer, many of the companies do not accept deaf applicants.

“What we need is more education. There are lots of resources for the deaf here in Manila, but not much in the province,” she told the crowd.

The participants of the Pride Month are also encouraged to support and donate for the victims of the ongoing clashes in Mindanao. For every P150 donation, each participant can get a free Tshirt. JPV