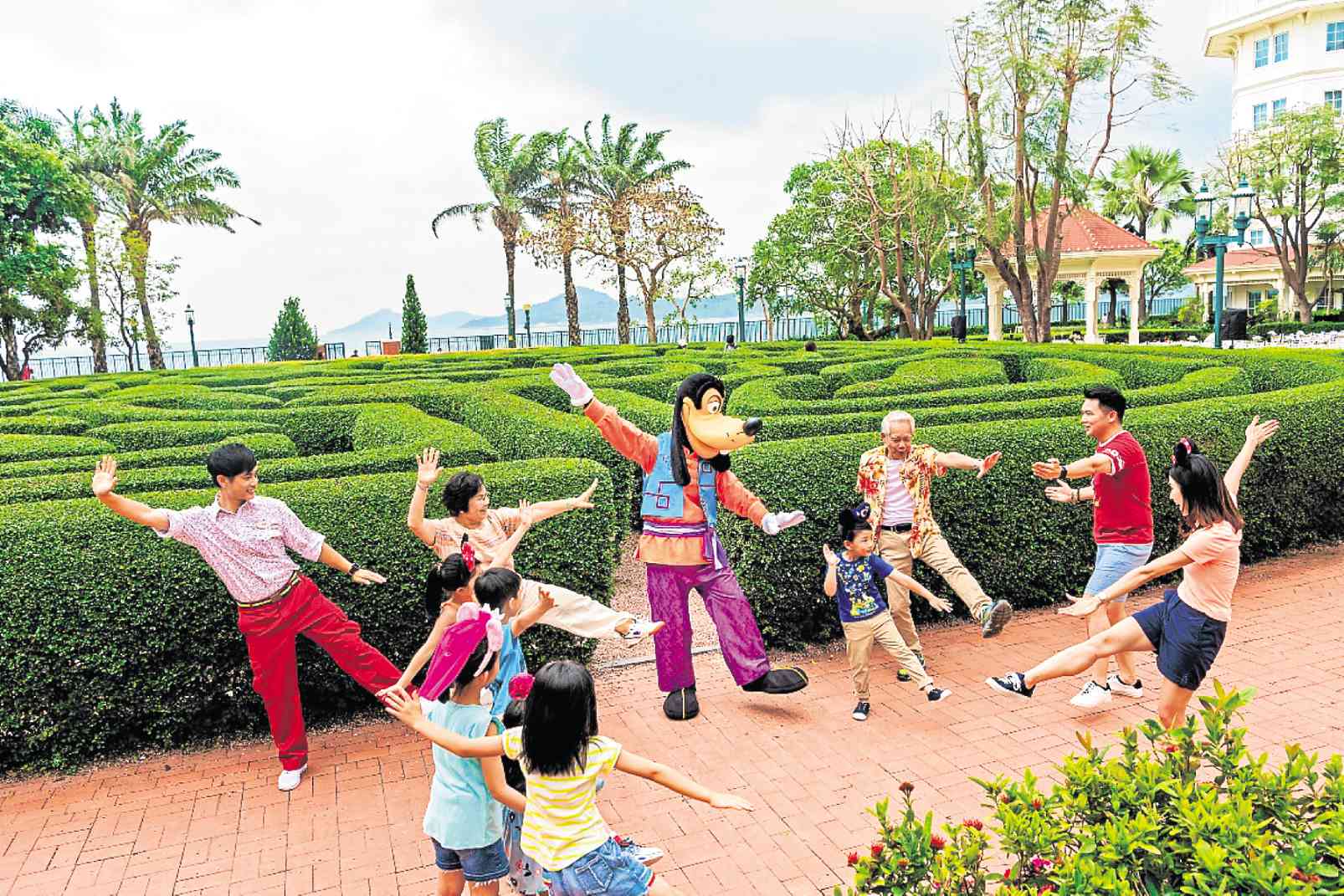 The phone rang inside my room at Disney Explorers Lodge’s Africa wing. I reached for it groggily, still wrapped in my duvet-and-pillow cocoon. A familiar voice greeted me cheerfully. “Good morning, sleepyhead! This is Mickey Mouse, your wake-up call. Lots going on today, pal, so up and at ’em, and we’ll see you soon, okay?”

One of the greatest things about checking into a Hong Kong Disneyland hotel? You don’t just get to enjoy your hotel, you get access to the facilities and activities of all three hotels: Hong Kong Disneyland Hotel, Disney’s Hollywood Hotel and the new Disney Explorers Lodge. Each hotel is distinct and unique, offering endless magical possibilities for guests.

We took the shuttle from Disney Explorers Lodge to Hong Kong Disneyland Hotel. We were starting the day by doing Tai Chi with Master Goofy.

Walking into the Victorian palace that is Hong Kong Disneyland Hotel is like traveling back in time. We made our way down to the garden maze area where people of all ages had gathered. Soon, Goofy appeared in his tai chi master outfit and led everyone through the graceful moves of the gentle but effective ancient Chinese exercise. It was adorable to see toddlers concentrating on following Goofy’s movements.

When the tai chi session was over, guests got the chance to have photos taken with Goofy. After our turn, we headed to the Enchanted Garden, Hong Kong Disneyland Hotel’s garden- inspired buffet restaurant for breakfast.

The spread of food was impressive—there was so much to choose from. We loved the char siu buns, the shrimp dumplings, the Portuguese egg tarts, the curry, and of course, the Mickey Mouse waffles and mini Mickey Mouse pancakes.

It was the most magical breakfast and not just because of the food—Mickey, Goofy and Pluto were at the Enchanted Garden to say hi to everyone, take pictures and give high fives and big hugs.

And the kids weren’t the only ones who got excited.

We watched with delight as Mickey made a baby stop crying by playing peek-a-boo with him.

At a table beside ours, a big Filipino family posed for photos with the adorable Pluto.

We enjoyed breakfast so much that we posted on Instagram: “Can we all just live in Disneyland forever?”

Bibbidi Bobbidi Boutique, also found at Hong Kong Disneyland Hotel, made us wish it had existed when we were children. At this enchanting store, Fairy Godmothers-in-Training transform little girls into Disney princesses with magical makeovers. Disney fans from the ages of 3 to 12 can choose to get the royal treatment and become Elsa, Anna, Ariel, Snow White, Aurora, Belle, Cinderella or Rapunzel for the day. Reservations can be made up to 180 days in advance.

There are a lot of other things to enjoy at the Hong Kong Disneyland Hotel. During Disney Story Time, cast members tell Disney stories as they walk through a giant storybook at the Storybook Playroom. Disney characters make surprise appearances at the Grand Staircase near Storybook Playroom daily. Listen to live music as a five-piece band plays your favorite Disney songs at the grand lobby. Walk through the maze. Swim in the elegance of the indoor pool or experience adrenaline as you go down the 40-meter long, waterfall- themed slide at the outdoor pool.

Disney’s Hollywood Hotel takes you to California with its glitz and glamour. Begin your day with Morning Movie Time at the Studio Lounge. We were laughing while watching Donald play pranks on Chip and Dale on the big screen when Goofy and his giant tumbler of popcorn suddenly appeared.

“Hey, Goofy!” we said and he high-fived us. He posed for photos with everyone.

Another fun way to spend the morning at Disney’s Hollywood Hotel is by joining an arts and crafts session at Malibu Games. We enjoyed making Minnie, Winnie the Pooh and Elsa badges with parents and their little kids. Malibu Games is also the venue for Free Fun Play, where kids get to play arcade games in the afternoons at no cost.

Enjoy the California feel of Disney’s Hollywood Hotel by taking a walk around its premises. Stop to take pictures of the Hollywood sign, famous streets and other iconic landmarks. Go for a dip in the Piano Pool and watch classic Disney movies at the Disney Movie Premiere. Grab a meal at Hollywood & Dine, a fun restaurant looks like a classic movie theater.