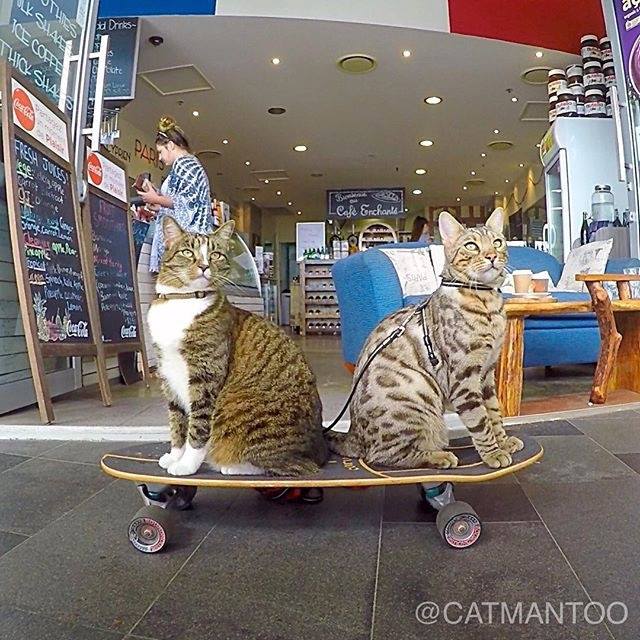 If you thought cats were best at lazing around, meet two cats who break that stereotype.

Boomer and Didga are some of the most adventurous kitties around, getting into some extreme action like skateboarding, skimboarding and riding a kayak.

They have several videos featuring their unique tricks. In the latest one, Boomer, a beautiful Bengali cat, is seen rolling on a skateboard amidst amused onlookers:

While impressive, he can learn a thing or two from pet sister Didga (pronounced Did-ja), a tabby who knows her way around a skate park:

The awesome twosome are owned by an animal trainer named Robert, an American based in Australia who loves dogs and cats equally.

According to his website, Robert wanted to “dispel many of the myths associated with cats, i.e. like they can’t be ‘trained,’ they need to roam to be happy, they need to be declawed so they don’t scratch the furniture.”

He emphasizes that his cats’ tricks can take up to years of work and that no cat should be forced “to do something they didn’t like.”

For those who do want to train their cats, his Youtube channel features tutorials, but he stresses that “if you’re expecting immediate results when teaching animals, especially cats, then you’re doing it wrong.”

He has since given up dog training to focus on his cats. At any rate, it looks like Didga and Boomer will keep enjoying a life of adventure—in between some catnaps. JB

WATCH: Koala surprises diners as it strolls into Australian restaurant