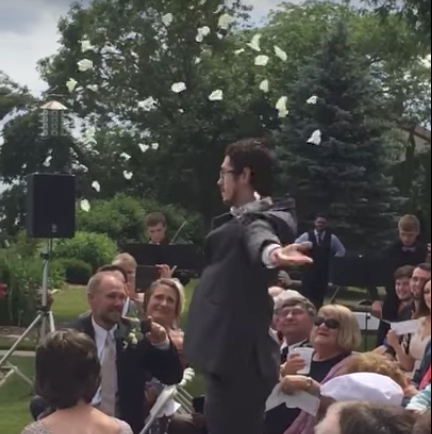 In weddings, little boys traditionally get to play as a ring bearer while little girls get to be a flower girl. But in one wedding in Madison, Wisconsin, there was a break in tradition when a 28-year-old man played as the “flower man,” reports Huffington Post.

Patrick Casey was cousin to the bride Andria Farthing and both had been close while growing up. Long before wedding plans were thought up, Casey had been asking to become the “flower man” for his cousin’s wedding, reports

According to Casey, “I was lobbying to be their ‘flower man’ even before they were engaged.”

When Farthing became engaged with now-husband Jake, the couple decided to let Casey become the flower man he had been longing to be.

“A little later, after their engagement, they honored me by bestowing me with the duty I so craved,” he said.

“I used the same flower basket that she used when we were in that wedding together as children!” Casey said in the report.

Apparently, Casey was very proud of what he did for his cousin and the attendees appreciated it too.

“I think most people were won over when I stopped at the end of the aisle, put the basket down and pulled flower petals from my pockets and threw them in the air, LeBron powder-toss style,” said Casey.

But more than anything, Casey thinks that a good marriage deserves to have a few laughs from the very beginning.

“A good marriage includes a lot of laughing,” the report quoted Casey. “So what’s wrong with a bit of fun at your wedding with someone you both love and who loves you both?” Alfred Bayle/JB